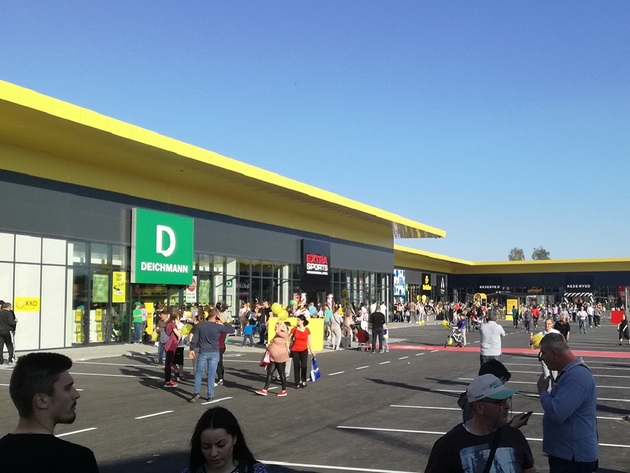 (Photo: Marko Andrejić)
The fifth Stop Shop retail park in Serbia opened on Thursday, April 19, 2018, in Pozarevac. The new facility of the Austrian company Immofinanz has around 7,200 square meters of retail space and 330 parking spaces, and this retail park features outlets of 16 local and international brands.

– After entering the Serbian market in 2015, the opening of the fifth Stop Shop supports our quick expansion in Serbia, which is of great interest for our partners, international retailers. The new retail park will provide an efficient and pleasant shopping experience to everybody – Josko Pitesa, Operations Manager of Immofinanz in Serbia, stated on the occasion of the official opening of the new facility.

After Cacak, Nis, Valjevo and Lazarevac, Pozarevac is the fifth location in which Immofinanz has opened a facility, and the next retail park will open as soon as April 26 in Vrsac, whereas the next location, in Sremska Mitrovica, is being prepared.

According to Mayor Bane Spasovic, this first direct foreign investment in Pozarevac after several decades is worth over EUR 10 million, and 300 people have been employed at the retail park.

Josko Pitesa says for eKapija that Immofinanz is already planning the second phase of the retail park in Pozarevac, within which almost 3,000 m2 more of retail space will be built as an extension of the existing facility. He points out that the exact deadlines are not yet known, but that negotiations are in progress and that the realization might start very soon.

– As a city, Pozarevac suits our concept, and this new facility also fits in with the trend of the growth of retail parks in Serbia. Having in mind the extremely good location and the excellent cooperation with the local self-government, we expect a large number of visitors and very good results in the fifth Stop Shop – Pitesa says.

He adds that Immofinanz is very satisfied with the results of retail parks in Serbia and that some other locations are therefore being prepared. He reminds that the Stop Shop in Pozarevac is the 71st one within the group, in a total of eight countries.

Josko Pitesa also emphasizes that Immofinanz always incites its contractors to hire local companies as subcontractors and use their resources. Among others, Neimar Gradnja was active in the construction of the facility in Pozarevac.