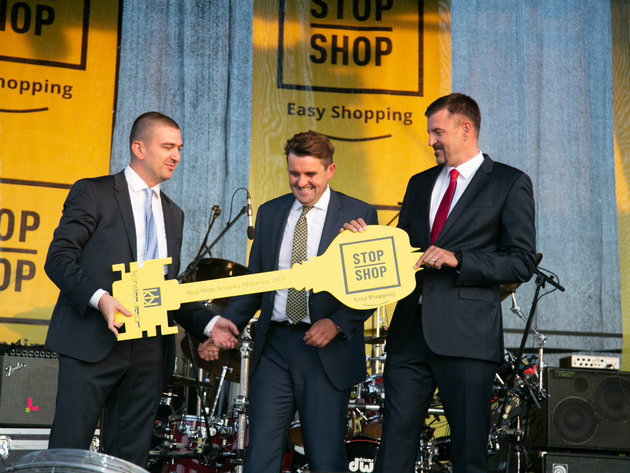 Handing of the “key”, Ognjen Kisin, Josko Pitesa, Dietmar Reindl
After the successful construction of Stop Shop retail parks in Nis, Lazarevac, Valjevo and Vrsac for which Konstructor Konsalting was hired as the main contractor, another Stop Shop retail complex has been opened in a new location in Sremska Mitrovica.

The opening ceremony was attended by The Mayor of Sremska Mitrovica Vladimir Sanader with associates, Mr Dietmar Reindl, the Chief Operating Officer at Immofinanz, Mr Josko Pitesa, Immofinanz Serbia Operations Manager , Mr Ognjen Kisin, CEO of Konstruktor Konsalting with the engineering team, Nikolaus Lutteroti, the Austrian Ambassador to Serbia, Branislav Nedimovic, Serbian Minister of Agriculture as well as the officials of Immofinan, Novaston Asset Management, Kjubik and many other guests, associates and representatives of the media.

The great number of Sremska Mitrovica residents were also present at the opening ceremony with the all-day entertainment program. Tropico Band and Bajaga i Instruktori held concerts for the audience in the evening which ended in a spectacular fireworks show.

Konstruktor Konsalting has built five buildings in a row under a turnkey system and according to the highest quality standards of the renowned Austrian investor Immofinanz.

This is the tenth building for Immofinanz in Serbia.