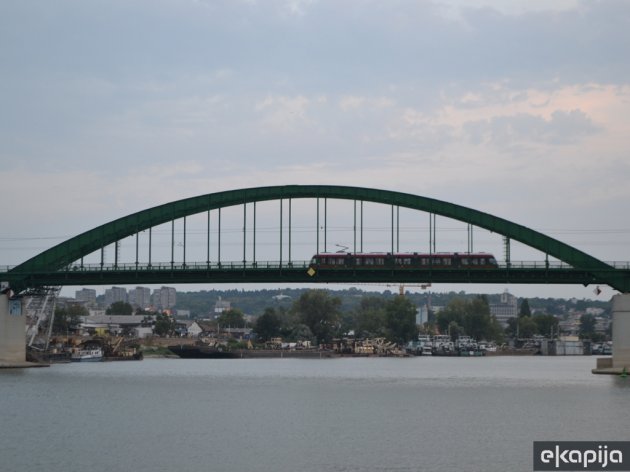 (Photo: Suzana Obradović)
Whether the Old Sava Bridge will be moved to the Usce Park or to the area between Block 70 and Ada Ciganlija will be decided by citizens of Belgrade. Next week, a 45-day survey will open on the city's website, allowing citizens to vote for one of the two options, says Marko Stojcic, the head urban planner of Belgrade. The survey will also present the data on the value of both projects and a depiction of both solutions.

– If the citizens choose the Usce Park option, it will be moved there as a sculpture located between the Museum of Contemporary Art and Branko's Bridge. It will be elevated to a height of 4.5 meters and feature hospitality facilities and several galleries underneath. If it ends up in Usce, we will build a pedestrian and cycling bridge in Block 70, in the extension of Omladinskih Brigada Street, and an underground garage would be built below a part of the street. This option is cheaper by 10% than moving the tram bridge to Block 70. But, it's all up to the citizens of Belgrade – Stojcic claims.

Let us remind that the deputy mayor of Belgrade, Goran Vesic, recently said that the bridge would be moved as a sculpture to the park. As eKapija already wrote, if the Old Sava Bridge is moved to the Usce Park, a new one will be built in Block 70a. More about this can be found in a separate article.

The construction of the new bridge on the Sava should begin in 2020, the Institute of Transportation CIP, the author of the preliminary design, recently said for eKapija. More about this can be found in a separate article.

In addition to the Old Sava Bridge, there will be a survey about the Republic Square. Citizens will be asked what they'd like to see in place of the temporary shopping center facility, popularly known as Staklenac.

– We will get there only once we're sure of the size of the underground garage there, along with the subway station. The size of the future garage in the Republic Square depends on whether it will be built in Vasina Street, which we will know only after the archaeological explorations on the Students Square are completed – Stojcic emphasizes.
Companies:
Grad Beograd
Tags:
City of Belgrade
Marko Stojčić
Goran Vesić
Old Sava Bridge
Republic Square
Staklenac
moving of Old Sava Bridge
sculpture
Ušće Park
Block 70
bridge as sculpture
Usce Park lookout
tram bridge
construction of new bridge in Block 70a
Museum of Contemporary Art
Share: