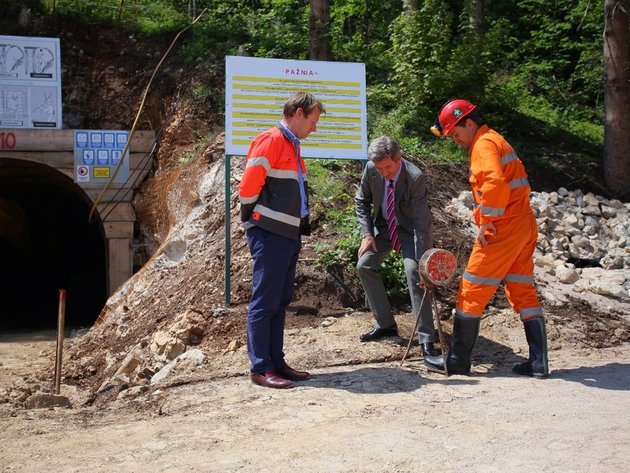 From the official opening of the mine in Olovo
The British company MINECO officially opened the lead mine at Olovo in Bosnia and Herzegovina on Thursday, May 10, 2018. It is the first new metal mine in B&H for 30 years and the only underground one in the country.

As announced by MINECO, at the official ceremony in Olovo, the start of underground lead mining was officialised. Six years after the concession was granted, with over 40 permits and more than six million euros of investment, the British MINECO Group today employs around 120 staff.

MINECO Group's Chief Operating Officer Dominic Roberts said that all this would not have been possible without close cooperation with the responsible ministries and institutions, and a common desire for this investment to succeed. He also observed that the best in global practice and modern technology will be used in this mine, which will enable the mine to be a safe workplace with no damage to lives.

– This is the safest mine in Bosnia and Herzegovina; we have set the standards for the further development of mining in B&H – said Roberts.

Edward Ferguson, the British ambassador to B&H, greeted this capital investment by the British company MINECO, which is already employing several hundred people throughout B&H.

– Mineco has an excellent reputation in occupational safety standards and environmental protection. We expect the full support of the responsible institutions for the remaining administrative procedures so the mine can operate at full capacity and enable long-term, sustainable employment for hundreds of people in Olovo and surrounding municipalities – said Ambassador Ferguson. 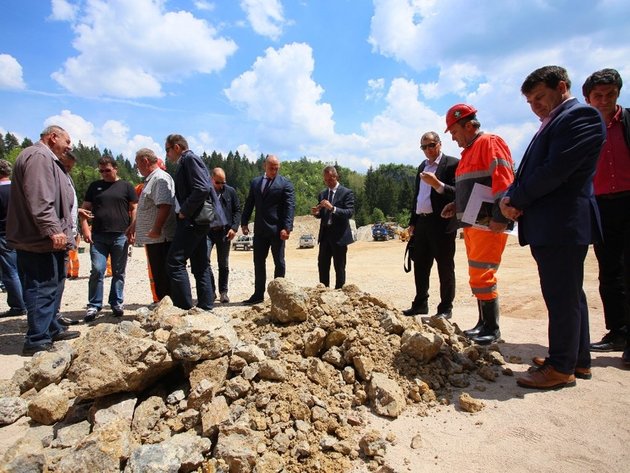 Ambassador Lars-Gunnar Wigermark, Head of the EU Delegation to B&H and EU Special Representative, pointed out that Bosnia and Herzegovina has huge potential for mining development and expressed satisfaction that the European Union contributed to launching this mine in Olovo through its research and innovation programme Horizon 2020.

At the official opening of the mine at Olovo, the Minister of Energy, Mining and Forestry of the B&H federation Nermin Džindić declared the importance of such investments for BiH and promised the continued support of the ministry in speeding up procedures for obtaining the remaining permits, while Đemal Memagić, mayor of Olovo, noted that the importance of this investment lay in the development of the local community.

The lead mine at Olovo has a special importance for European mining, as it is the first test mine in the IMP@CT project, which has received support from the Horizon 2020 programme to develop targets, technological innovation in the design of mining equipment and planning in the mining of smaller seams of strategically important metals like lead, zinc and antimony. At the Olovo mine research will take place including experts in the fields of geoethics and social and environmental sustainability. The IMP@CT project is thus connecting some of the leading scientists in the field of European mining and the best technical innovators in the private sector.

By opening the new mine in B&H, the British company MINECO is continuing its growth and development, as it began test production in 2017 at Bosilegrad in Serbia in another completely new metal mine in the Western Balkan region. Bosil-Metal became the first fully built underground mine in Serbia in the last 40 years.

Besides Bosil-Metal, the British company Mineco and its partners own two more lead and zinc mines in Serbia – the mines at Gornji Milanovac and Veliki Majdan. Besides the Olovo mine, Mineco is the majority owner of the Gross lead and zinc mine in B&H and the antimony mine at Novo Goražde where it carries out research. At Čelebići near Foča, research has been successful and a study on ore reserves has been certified.
Companies:
Mineco plus d.o.o. Beograd
Rudnik Gornji Milanovac
Ambasada Velike Britanije i Sjeverne Irske u BiH Sarajevo
Federalno ministarstvo energije, rudarstva i industrije Mostar
Općina Olovo
BOSIL-METAL d.o.o. Bosilegrad
GROSS d.o.o. Gradiška
Veliki Majdan Ljubovija
Tags:
Mineco
lead mine in Olovo
lead mine
EU Delegation to B&H
Horizon 2020
Project IMP@CT
Dominic Roberts
Edward Ferguson
Lars Gunnar Wigermark
Nermin Dzindic
Djemal Memagic
Bosil Metal mine
lead mine
zinc mine
copper mine
lead
zinc
copper
underground mine
lead and zinc mine Gross
antimony mine in Novo Gorazde
Celebici
ore reserves
Share: