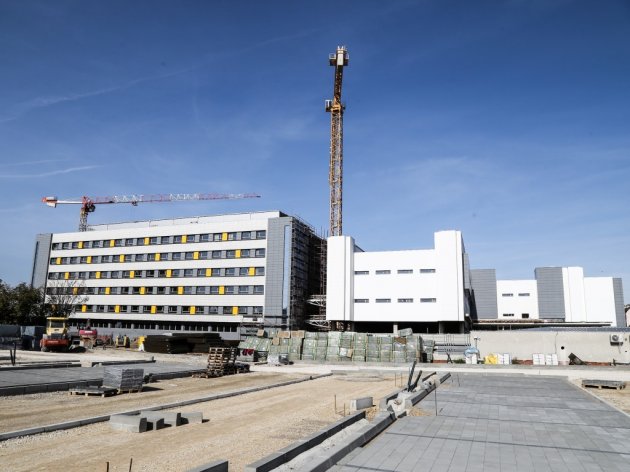 Clinical Center in Nis, archive
The modern Clinical Center, in whose reconstruction EUR 50 million was invested, officially opened at a ceremony in Nis on Sunday, December 17, 2017.

Serbian President said on the occasion that it was the first fully completed clinical and hospital center in Serbia up till that point.

Vucic said that the Clinical Center in Nis, which will welcome its first patients next Monday, was equipped with the latest technical equipment, devices of the best companies from Germany and America, and that the construction of new centers in Belgrade, Novi Sad and Kragujevac would start in the spring of 2018.

Minister of Health Zlatibor Loncar said that three years before there had been only mud and swampland in the location of the new Clinical Center building, and that there was now a modern facility in the location, symbolizing new times and new healthcare. He added that the opening of the center would lead to numerous waiting lists' becoming obsolete.

– The cardiosurgery building used to be overgrown with weeds. Now, the most complex operations are being performed there, there are no waiting lists and patients come all over from Belgrade in order not to have to wait – Loncar emphasized.

– We will continue investing in all regions. I expect the final preparations in the Clinical Center in Nis to be fully completed by next Monday and that it will then start welcoming its first patients – Loncar said.

The new Clinical Center has more than 50,000 m2, a total of 17 operating rooms and 630 beds, comprising an independent unit. Around EUR 16 million was invested in the devices alone, whereas the construction of the building itself cost EUR 35 million.

The construction of the center began back in 1978. The works continued in 2013 in line with the new project, prepared in 2003.

The first announcements said that everything would be completed before the end of 2015. The official opening was announced for 2016, but the new hospital opened in December 2017 after all.

Funds for construction of heliport secured

The Civil Aviation Directorate of the Republic of Serbia has set aside RSD 15 million for the construction of a modern heliport in the Clinical Center in Nis.

– This will be the most modern heliport in Serbia and it will enable efficient medical handling of those injured in traffic accidents. The only functioning heliport is the one in the Military-Medical Academy – said the head of the Civil Aviation Directorate, Mirjana Cizmarov.