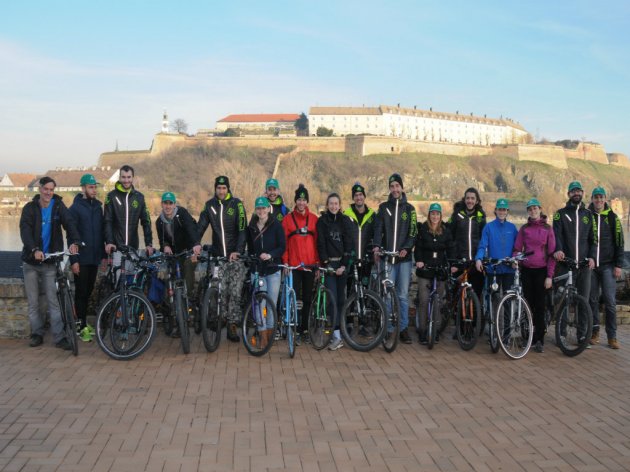 The only licensed ecological courier service in Serbia has been operating in Novi Sad for three years now. The idea to deliver shipments by bike occurred to Milan Lisica while he was at his MA studies in Groningen, where he was introduced to the highly developed Dutch bicycle culture, as well as courier delivery by bike. After he returned to Serbia, Lisica founded Eko Kurir in Novi Sad, with three friends, Dejan Vlaski, Goran Djeric and Vladimir Horvat.

– At the very beginning, our expectations were to contribute to the city and the community in which we had decided to live and create as much as possible as a group of friends and for our ideas do become accepted to the greatest extent possible. We were going from door to door, from shop to shop, introducing our fellow citizens to the new concept of courier services. Our enthusiasm, positive energy and support by our friends were crucial. Thanks to our dedication, we didn't have to wait long for the positive reactions to start coming in – Dejan Vlaski, president of the Eko Kurir club, starts his interview for eKapija.

Vlaski is a journalist by profession, as are Lisica and Djeric, whereas Horvat is a psychologist.

Although the business venture was initiated by four friends, the number of Eko Kurir members has been increasing at a quick pace, and the association now numbers 30 members, of which 15 are active couriers. People of Novi Sad know Eko Kurir very well at this point, and the circle of clients is increasing day by day through word of mouth.

Eco couriers operate in three Novi Sad zones. In the first two, a delivery takes no more than an hour, whereas in the third one it takes a an hour and a half at most. The prices of delivery range from RSD 130 up, depending on the request. The manner of operation, the quickness, the prices and the quality of service enable them to cooperate with numerous clients from various fields. Optics shops, dentist's offices, book-keeping agencies, law offices, print shops and fast food restaurants are just some of their clients. Aside from the business sector, they are open to cooperating with citizens by running errands for them, such as paying bills, withdrawing pension money, going to the store or the green market, getting prescription drugs and other activities people don't have time for. 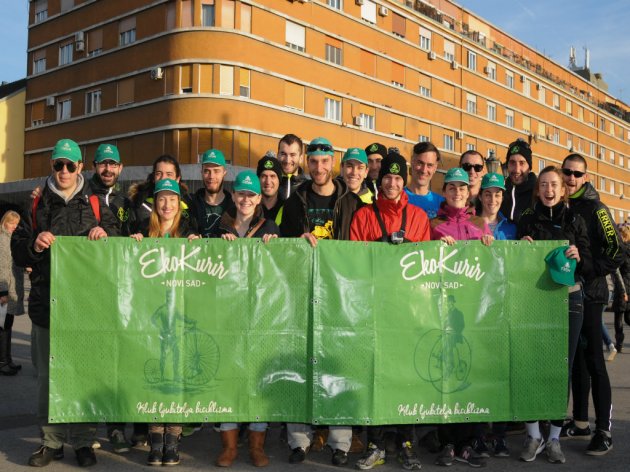 Every eco courier crosses around 50 km delivering various shipments during a four-hour shift. Vlaski says that they are all passionate cyclists and that they therefore enjoying riding through the city and everyday surprises that are a part of a courier's job.

– We work in all weather conditions, including the rain and the snow. This should come as a surprise to anyone, as the bicycle is a means of transport that is available throughout the year, not just in certain seasons. The most important thing is to be dressed adequately. Of course, in cases of extremely bad weather, such as constant rain showers or snowstorms, we work at reduced intensity. It's important to us that our clients understand this and tend to go easy on us when the weather is bad. Regardless of everything, we do prefer sunny weather after all – Vlaski adds.

Packages sent through Eko Kurir shouldn't exceed 10 kg or be too bulky. Those that are too big or heavy to fit inside backpacks, pouches or bike racks won't be accepted.

Eko Kurir's revenues cover the costs of the association's functioning, marketing activities, regular bicycle servicing and the realization of socially responsible projects. Of course, couriers receive monetary compensation for their work, in the amount ideal as an additional or student income, keeping in mind the specific work hours. Eco couriers hope that they will be able to make this their main source of income if the scope of the work increases adequately in the future.

There have been no unpleasant occurrences with clients, Dejan Vlaski says for eKapija, but traffic incidents, as well as bicycle theft, have happened.

– There have been cases of theft, partly due to mistakes made by the members themselves. In their desire to deliver the shipment as quickly as possible and move on to the next one, couriers have sometimes left their bicycles unlocked for a few minutes, which is quite enough for thieves. Several such bad experiences had to occur before they started taking better care of securing the bicycles and we hope that there won't be any incidents in the future. There's another problem making it all more difficult, namely the careless drivers. It's clear that there are people with total disregard of others' safety, who jeopardize other participants in the traffic. Cyclists are the most vulnerable in that respect, and we want to use this opportunity to appeal to all participants in the traffic to honor the rules, as that's what they're there for. That's all it takes. Even with several traffic incidents, fortunately, none of our members have been substantially hurt – Vlaski says. 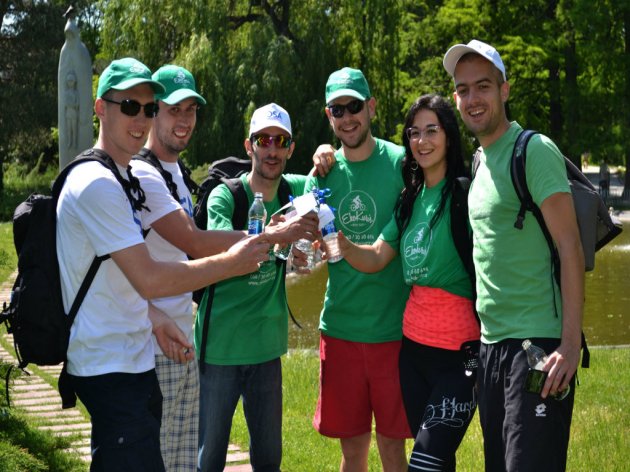 Humanity and ecology, not just cycling

In addition to transport, Eko Kurir is active in sports, humanitarian and environmental projects. So far they have had more than 30 actions realized in this field – cleaning Novi Sad's beaches, procuring school accessories for the children from Novi Sad's Shelter, donating blood... This summer, they organized the “Garry Cares for Strand” (“Gari za Strand mari”) action in cooperation with Erker Inzenjering. The action enabled the people of Novi Sad to use city beach ashtrays available at eco-points along the coast of the Danube and later recycle them.

– All these actions are very important to us as they are the main reason Eko Kurir exists and operates. We want to provide an example, to increase environmental consciousness in our fellow citizens, to educate people and make our living environment healthier – Vlaski emphasizes.

Furthermore, Eko Kurir, supported by Subotica's Venera Bike, gifted a bicycle to a girl in Telep, and they are currently organizing an action of procuring school accessories for primary school children of Novi Sad. They are planning to raise a monument to cycling in Novi Sad, and the conceptual design and the request have already been submitted to the competent authorities.

Our interviewee doesn't exclude the possibility of eco couriers' appearing in other cities of Vojvodina, as there's a developed cycling infrastructure, as well as a developed cycling culture. However, Eko Kurir is for now focused on improving and expanding its activities in Novi Sad exclusively, where, as they say, there's still a lot of room for improvement.

– The longer we cycle the higher the expectations are, as well as the goals which are both a challenge and a motive for us, while at the same time providing satisfaction – our interviewee says.