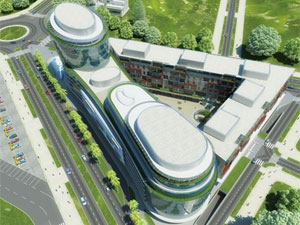 Atlas Capital complex
Abu Dhabi Capital Management (ADCM) signed Friday (25 April 2014) an agreement to build a hotel within the Atlas Capital complex in Podgorica, one of the largest and the most luxury multipurpose centers in the region.
People at Atlas Capital voiced their expectation that the six-story hotel would be finished by the end of the next year. Aside from the hotel, Atlas Capital already includes luxury suites, offices, embassies and retail stores.
ADCM CEO Jassim Alseddiqi said that Abu Dhabi Capital Management has a tradition of investing in good and highly-lucrative projects.
- Following the completion of works next year, the hotel within Atlas Capital will be the largest in Podgorica and will be managed by an international operator - said Alseddiqi.