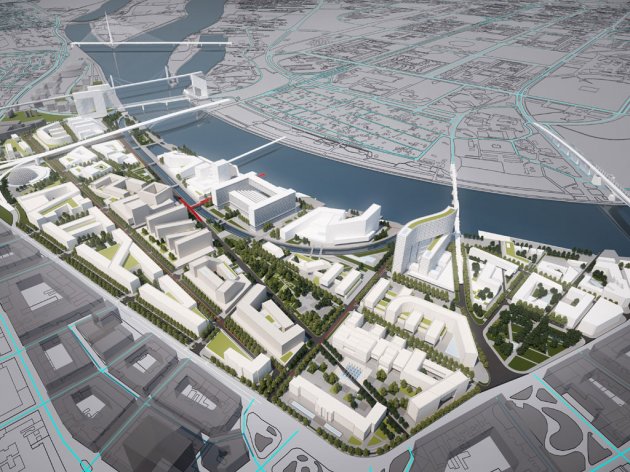 Master plan of the Belgrade on water project construction was presented on Sunday (March 2, 2014) in Dubai. Apart from that, preliminary designs for the Belgrade Tower and a shopping mall were presented.


The presentation was chaired by Mohamed Alabbar, director of newly set up Eagle hills company which is the project investor. The First Prime Minister of the Government of Serbia, Aleksandar Vucic, attended the presentation of the Master plan.

The Eagle Hills company which will build Belgrade on water, released a competition for architecture designs for two facilities – the Belgrade Tower and a shopping mall, the Government of Serbia announced. The most famous world companies, the American studio SOM which is the designer of the world’s highest building - Dubai-based Burj Khalifa, participated the competition.

The total area of the Belgrade on water, including residential area and business premises will occupy 1.850.000 square meters. The boulevard will be 1, 8 km long and 40 meters wide. The construction will comprise three extensive stages and the first one will be in five segments.

Large world companies have already delivered eight proposals for the Belgrade Tower, four of which were shortlisted for the Tower and two for the shopping mall.

(Detail from the presentation in Dubai)

The First Prime Minister of the Government, Aleksandar Vucic, after the meeting and addressing the journalists, said that companies and architects from Belgrade will be a part of the construction of the Belgrade on water project and that some 20.000 people will be hired.

- Belgrade will become a regional center. We will be the country which attracts the largest number of tourists and investors in the region – Vucic pointed out.

- One of the most important parts of the Belgrade on water, the Belgrade Tower, will be completed by 2017 - Mohamed Alabbar, after the presentation of the project in Dubai.

- The project will be the pride of the entire Serbia – he said.

The First Prime Minister Vucic underlined that both political and economical stability necessary for attracting foreign investors is essential and that Serbia is the country where these conditions are fulfilled.

(Detail from the presentation in Dubai)

The world premiere of the Belgrade on water project will be March 11, in Cannes, at the bigets real estate fair in the world.

Zeleznice Srbije (Railways of Serbia) have announced that March 12 site cleaning will start which will enable, among other things, the beginning of the Belgrade on water construction.

WILL CITIZENS CHOOSE THE TOWER DESIGN?

- I am happy to see that large architecture companies took part in designing. The Tower design took us majority of time. We will see later maybe to include citizens in decisions-making on design, we will figure out the way to do it - Aleksandar Vucic said in his announcement for RTS.

He added he wants the entire procedure to speed up.

- We expect that in the next month we will set up a joint venture of the city and the republic – Belgrade on water – Vucic said.