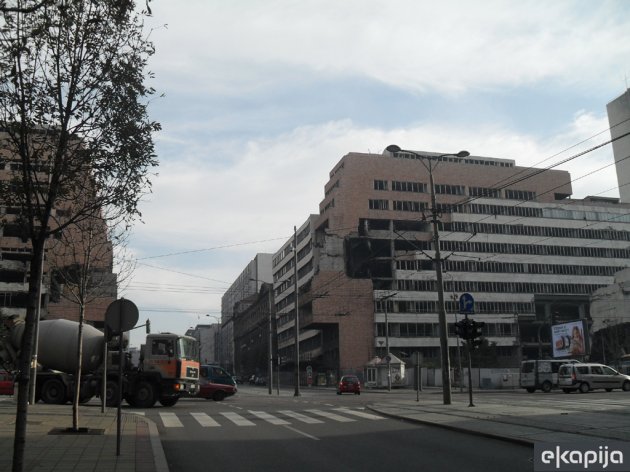 Clearing of the site of the General Staff Building in Belgrade is going on schedule and if the weather allows, it should be completed in early February as planned, people at the Defense Ministry told Beta news agency.

They remind that the clearing of the General Staff Building site commenced 26 November 2013 and that it was set to be completed in 70 days. Works are being carried out by Beograd Military Construction Institute.

People at the Defense Ministry stressed that the futher fate of the General Staff Building, which has the status of cultural heritage since 2005, would be determined by its owner - the Republic of Serbia, that is, the Republic Property Directorate. The building of former General Staff was designed by architect Nikola Dobrovic, and it was heavily damaged in the NATO bombing of Serbia in 1999.

In early 2014 we learned that US businessman Donald Trump expressed interest in financing the construction of a five-star luxury hotel on the sites of the buildings of General Staff and the Ministry of Interior of Serbia in Kneza Milosa Street. Georgije Genov, the director of the Business Association of Hotel and Restaurant Keepers of Serbia (HORES), told Beta that Trump's arrival would also attract other investors to Serbia.

According to him, Trump's hotel that could be built in downtown Belgrade would include over 300 rooms that would each cost between 150,000 and 200,000 euros to build, whereas the entire hotel would be worth up to EUR 100 million. It would employ up to 500 workers, while even more people would work on its construction.

The possible fate of the General Staff Building was also discussed earlier by eKapija.