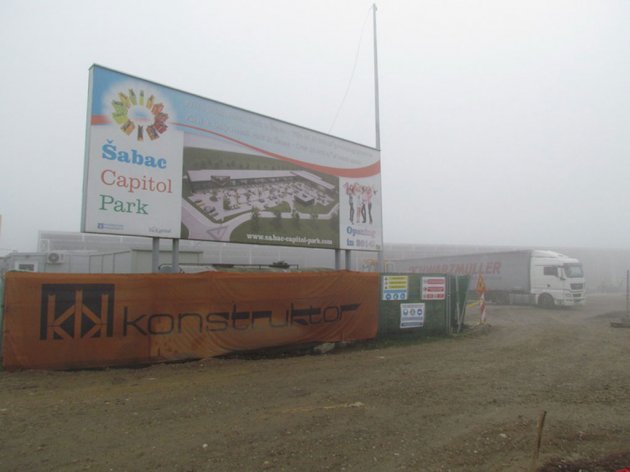 Sabac Mayor Milos Milosevic visited the building site of the future shopping center Capital Park Sabac on Tuesday (15 October 2013). On an area of 27,000 square meters, this facility will feature 15 units ranging in size between 109 and 3,000 square meters on a retail space of 9,688 square meters as well as 395 parking places. Investors Yu Kapital and Poseidon Group have announced that the facility will be opened 31 March 2014. The total value of this investment is close to EUR 10 million, it was announced on the official website of the city.

- The future shopping center Capitol Park Sabac will employ 120 citizens of Sabac. We hope that this investment, financed with the money from Slovenia and England, foreshadoes future investments - Sabac Mayor Milos Milosevic pointed out.

According to Marko Krajncic from Yu Kapital, Capitol Park Sabac, the second retail park in Serbia, is based on the same concepts as similar retail facilities across Europe and the world.

The shopping center will accommodate 80 percent of international and 20 percent of local and regional tenants. Contracts have already been signed with hypermarkets Delhaize and Tempo. Investors also announced the arrival of Denmark's JYSK, New Yorker, Deichmann, etc. Each store will have a separate entrance and a parking lot for personnel.