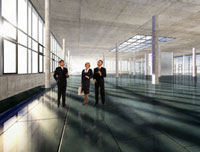 In two or three years, there will be between 300,000 and 400,000 square meters of office space in Serbia inside modern shopping malls, some of which have already been built in our country.

Speaking about that forthcoming "expansion", the general manager of Belgrade's office of company "Colliers International", Jovica Jakovac, says in the interview for "Ekapija" that there is much interest on this territory in the investments in the aforementioned malls and that it is present in both domestic and foreign investors.

- The locations on which shopping malls will be built in the following years will not be only in Belgrade or Novi Sad, but also in many towns in the south of Serbia. All projects of that kind, such as "Delta shopping mall" in Novi Beograde-based Block 67, "go" through our company, which, for the needs of the investors, works on the rental of space, that is, occupation of future complexes – Jakovac explains.

According to his words, the interest of both local and foreign entrepreneurs in rental of outlets and other space in future shopping malls in Serbia is pretty big, but, as Jakovac claims, the main point does not lie in the speed at which the space is occupied, but in the quality of companies that will enter such complexes.

- Commercial construction is what currently characterizes local real estates market and that will develop even more. Soon we expect the real explosion of construction of apartment space, followed by construction of industrial zones that will be built around the airport, on the banks of the Danube, etc. Belgrade-based office of "Colliers International" will continue to make effort to meet the demands of all interested investors, to help them realize their projects, as well as in the promotion of Serbia as more and more attractive investment area – said Mr. Jakovac.