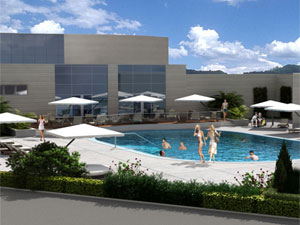 preliminary design for a spa center

When it comes to investments in the fields of tourism and hospitality, Belgrade has been one of the most attractive cities in the region over the last few years, with its offer expanding to include more and more luxury hotels, unusual restaurants, interesting tours. As far as the "pleasure industry" is concerned, the capital city has one more ace up its sleeve. A hidden resource that the city keeps - hot and hot mineral springs, is still insufficiently exploited, but there have been some developments in that respect recently.

One of the famous city springs is situated in Ovca, and a small pond, whose water locals believe to be healthy for skin, eyes, sinuses and respiratory organs, has been neglected for years. The water that springs here is highly mineralized and comes from the depth of few hundred meters, and it is six times as saline as seawater. Last year, so-called Ovcanska spa, located in the vicinity of a church in the very center of this neighborhood, was cleaned up and renovated. It has been announced recently that this place could become a real tourist attraction.

People in Belgrade have been speculating for a while that a recreation or entertainment complex could be built in Ovca. This year the first announcements were made confirming that the capital city might soon obtain another tourist attraction on its outskirts - a spa center. 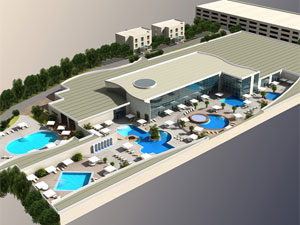 One of the preconditions for launching such project was to make a change to the Belgrade Master Plan. For the first phase of the sports and recreation complex - spa center, the borough of Palilula placed an order for an urban design solution, which was completed last summer by the Belgrade Town Planning Institute and put on public display in September.

Borough officials did not want to discuss details with eKapija, but we were told that the city had initiated the work on a comprehensive zoning plan for the area of Ovcanska spa. According to what the representatives of the borough council told our web portal, they are searching for an investor and are particularly interested in having the project implemented through a public-private partnership.

The site in Ovca could be interesting to prospective investors primarily because it is situated on one of the central routes in Banat, running from the Pancevo Bridge to Zrenjanin, which means that the citizens of Belgrade could reach the future spa center quickly and easily. 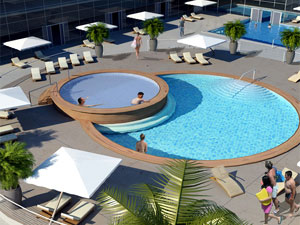 The design office Formaprojekt from Belgrade created a preliminary design for the spa center in Ovca last year. Architect Radmila Prica, the author of this solution, said that project development had been entrusted to another company, but she refused to tell us the name of the investor who had ordered that design. As she explained, the investor did not want to be presented to the public.

According to Formaprojekt's preliminary design, a 27,318 square meter spa center should comprise several outdoor and indoor swimming pools, quiet spa, pools for children, art gallery, sitting, resting and walking areas... The complex would be surrounded by greenery and divided into several units. The facade of the spa center is planned to be made of glass.

The complex would also include indoor swimming pools for children and other entertainment amenities.