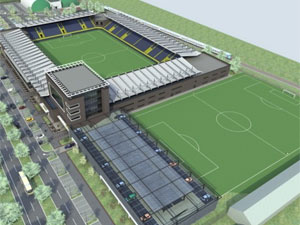 Football Club Novi Sad, which celebrated its 90th anniversary last year, may get a long-awaited "new grass" within the next few years. In addition to a new stadium, the project that has come in focus since recently also envisages the construction of several sports courts, inflatables, hotels, restaurants, swimming pools, large parking lot, etc., and the entire complex would be worth between 25 and 30 million euros. Too ambitious?

As eKapija learns from people at the headquarters of the Canaries, as they are popularly called, although it seems a bit unreal, the money is not a problem. They say that they have already found an investor, but they don't want to reveal who that is. However, it is clear to everybody that not everything is as it seems because the construction has not started yet.

It is not hard to guess that the stadium Detelinara now requires much more than an occasional maintenance and a seasonal facelift. The idea about a new pitch originates from a long time ago, but it was concretized only about a year ago, when the Club asked the City to help them resolve the land issue.

- No investor will invest money, especially this big, if the situation is not clear. It is necessary to resolve the land issue with the city authorities in Novi Sad - either through a lease agreement or by granting a right of multi-year use or through some form of public-private partnership - FC Novi Sad Secretary General Ranko Djurovic explains to eKapija. 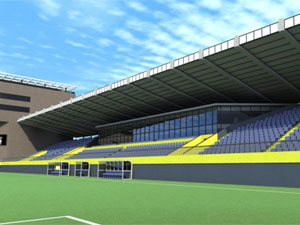 - An initiative was launched in September 2011, but nothing has happened so far, and we have no response. Nobody has showed understanding - he adds, pointing out that there are certain positive indications after all.

There used to be another obstacle to the construction of a new stadium, but this one has been "crossed".

- The part of the land lot where the stadium is situated now and where a new one should be built, together with practice pitches, inflatables, swimming pools and everything else, is defined in the General Urban Plan as a space for a sports complex. Until recently, this land lot was literally registered as a meadow. That was the first and primary problem, which is now solved.

From ball to mini ball

Our interlocutor explains that the construction of this complex would be carried out in few phases. The first phase would see the construction of a football pitch with artificial turf, which would cost between 270 and 300 thousand euros. The plan for this phase is to build one stand with about 200 seats. 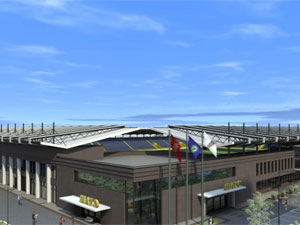 The plan for the second phase is to build two inflatable multifunctional fields for handball, basketball, volleyball and other sports. There should also be locker rooms, gym, multipurpose outdoor court (for basketball or tennis), as well as a restaurant. This section of the complex, so-called Mini Sports Arena, would also include a parking lot for about 60 cars.

The third phase would see the construction of the stadium and a practice pitch.

- According to the project, the new stadium should feature covered stands with about 10,000 seats. Of course, it would be lit in line with all UEFA standards, so that we could even host the matches of the national team here - says Ranko Djurovic.

If everything goes as planned, the new home of the Canaries should comprise all the facilities that are typical for contemporary stadiums - club hotel, infirmary, club garage and a business tower, and probably even a swimming pool in the future.

- The first and the second phase of the project could be finished in maximum six months. It takes about 2 months to install artificial turf and 3 to 4 months to complete the inflatables and accompanying facilities. All that would be going very fast if we got a license because the we already have the money - our interlocutor explains. 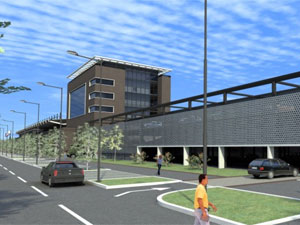 When it comes to deadlines for the main stadium, they are a bit more difficult to determine.

- About 75 percent of the required funding for the main part of the project are provided. How quickly it could be built depends on several factors, but it will definitely be completed sooner if we have all the funds necessary. I assume it would take between two and three years to completely finish it, with all accompanying facilities.

The author of preliminary designs for the sports complex is Arhiblast.

What is the recipe?

It is not secret that the role of private investors in the construction of sports facilities is constantly growing bigger and gaining in significance. A real example of that is the new stadium of FC Metalac, which was completed quickly and efficiently, with a minimum delay, unlike many others. Besides, it is not enough only to build a stadium because an adequate maintenance also requires money, that is, a lot of money. 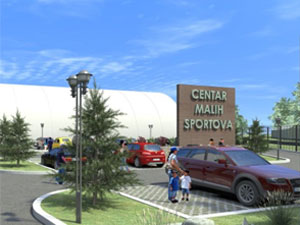 - FC Novi Sad receives RSD 890,000 from the city per year, which is not enough to keep the club operating even for a week. FC Timok, which competes in the same league as FC Novi Sad, gets EUR 25,000 from Zajecar every month. But we don't expect either money or assistance. We just want to solve the problem of land and start building.

Just like any other 50-year-old stadium, Detelinara is in a very bad condition.

- In order to be able to compete, we had to have installations, locker rooms and other things renovated. In essence, that was a waste of money because all this will be torn down if we start building a new stadium. However, that was necessary because the stadium was in a very bad condition and did not meet the criteria of the professional league. I am still of the opinion that there is no use investing some big money in Detelinara and that FC Novi Sad should get a new stadium.

FC Novi Sad, which competes in the First Serbian League, was established in 1921 as the Novi Sad Commercial Club. There was a time when Detelinara was too small for all those who wanted to watch the matches played by FC Novi Sad.