We are 25 years away from "Serbian Manhattan" - Destiny of Belgrade on water, Sava Amphitheater, Europolis

Belgrade has access to 270 kilometers of river banks, which is approximately equal to the length of the Montenegrin coast. Stories about the utilization of that resource become actual from time to time, making way for initiatives for the capital's expansion to rivers to fill the covers of newspapers. The most popular project is, certainly, Sava Amphitheater, which is again in the focus of attention. There is a good reason why Sava Amphitheater is one of the mythical themes in Belgrade's urbanism circles. Many generations of architects and town planners and some generations of construction politicians retell the myth of Sava Amphitheater as a treasure that will be built one day and turned into a new city center spanning millions of square meters.

- However, even if there was a political will and a substantial amount of money available, that huge project could not be implemented in one sweep. It demands a continued studying and a plan that dynamically connects all stages of its development - Miodrag Braca Ferencak, a famous town planner, explains to eKapija. In a conversation with our journalists, Mr. Ferencak talks about the potentials of the right bank of the Sava, which offers minimum 50 hectares for new development projects, as well as about the new city center spanning about 1.5 million square meters of new office or mixed urban space.

It has been claimed for decades that this location is the most attractive city area and should become the main place for living and working in Belgrade.

- One of the biggest obstacles to the development of that location is the railway infrastructure. Plans for the improvement of the Belgrade railway hub and the city's new Master Plan envisaging the relocation of railway tracks from Sava Amphitheater were finished back in 1951. According to that Master Plan, the railway station should have been moved to Autokomanda, whereas port facilities were supposed to be built on the Palilula side of the river. The plan for the right bank of the Sava was to build residential and business facilities, whose construction is still underway, but it is still far from its functional completion. Of course, there has been no capital investment in that area since the 1960s, there are no plans for new facilities, the existing ones are decaying, everybody waits for the space to be emptied to start something colossal from scratch, which is not going to happen by itself.

- The 1972 Master Plan confirms the purpose of Sava Amphitheater, the new railway station is not at Autokomanda, but in Prokop. There have been many contests, studies, graduate theses and initiatives since then, but none of them was based on a serious plan. 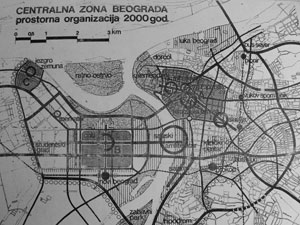 Even if there is a political will and a huge amount of money available, eKapija's interlocutor stresses that the main obstacles are - the absence of a solution to the current situation, relocation of the railway infrastructure and the lack of master plans and projects. Besides, the organization would have to be perfect and quite elastic, and even then it would take between 25 and 30 years to finish the construction work.

- The sooner we start the implementation, the sooner this colossal project will be done. It is necessary to prepare a quality urban and project and technical documentation, which could take few years. Then, a network of public roads, passages and public areas should be built along the entire length of the right bank of the Sava, followed by the construction of several traffic links between the bank and the boulevard, Savska street and Karadjordjeva street, as soon as possible.

- It is possible to close all other building sites to work on a new one. Also, it is hard to find investors for such big project or buyers for future facilities. It would take minimum 15 years to finish the construction work on that site.

As our interlocutor explains, one of the solutions is to cultivate the urban area and transform its parts, one by one, during a sufficiently long process, into new buildings and facilities. Such solution would guarantee quality and variety.