Can residential space in Belgrade cost less than EUR 600 per square meter - Construction of 1,400 apartments kicks off 2013 in Ovca

On the left bank of the Danube, in Belgrade's neighborhood Ovca, the construction of a residential and business quarter with 1,200 social housing and 200 emergency housing units will start in 2013, in accordance with the city authorities' plans.

This complex, which will consist of 4 blocks, will span nearly 8 hectares, and almost 100,000 square meters of space will be built within it. It is the first housing project in Belgrade to have been designed by as many as eight teams, and each of its future 15 buildings will look different.

According to architectural plans, these blocks will comprise a school, kindergarten, small marketplace, sports courts, parks and playgrounds, whereas facilities for senior citizens will be situated along the edge of the complex. Tenants will be able to satisfy most of their needs without leaving the quarter.

This unusual housing project is a result of the work of 33 architects from eight teams.

What was the reason for this unusual cooperation and what are the benefits of such planning?

An urban and architectural model of the residential and business complex Ovca 2011/2012 was created and developed in the period July 2011-January 2012. The investor, the Belgrade Investment and Housing Agency, announced an architectural competition last summer, attracting entries from 35 teams.

Nobody won the first prize, the jury awarded the second and third prize, while additional six entries were purchased. A decision on the new way of model designing was made by the jury president, the city architect Dejan Vasovic. In that way, all prize-winning teams joined forces to draw plans, forming TIM 8 (TEAM 8). Each of these teams of architects worked on a different section of the complex in Ovca. The exchange of ideas has resulted in the best solution. 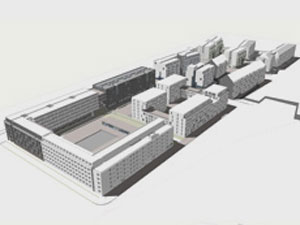 - This is a system of work that has been used in our country as well for years, and it has always been giving good results - architect Branislav Mitrovic, the leader of the Mit-arh team, says to eKapija.

- When an investor wants to get an interesting and unusual space, he or she decides to choose this model because each architect contributes a specific color and feature to the complex.

According to his words, the Investment Agency recognized the importance and novelty of such model, which is why the city architect chose it. After each team completed a design for their own section, two groups of four teams were formed to work on the models for 2 "neighborhoods" within the complex.

- We had about thirty meetings. What is very important is that the working atmosphere was exceptionally good at all times because our common desire is to show how this model can benefit the city that cannot really take pride in its architecture.

According to estimates, about 4,500 people will be living in the future complex in Ovca. Since it is a quarter on the outskirts of the city, meaning that it's kind of isolated as well, it is designed to offer its future tenants all the necessary facilities.

- Playgrounds, a marketplace, an area for senior citizens and all other additional facilities will be there because it is an isolated settlement. In that way, its tenants will not feel as if they are separated from the city - says our interlocutor.

When it comes to the size of future housing units, there will be studios, one-room and two-room apartments. However, although they will be small in size, the architects have put maximum effort in preserving high quality of apartments. 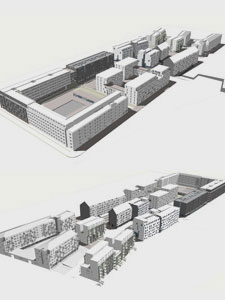 Besides, apartments are designed in such way (arrangement of windows, etc.) that certain rooms can be divided into smaller ones. Thus, tenants will be able to change the structure of their apartments if needed. All rooms are carefully designed and each apartment has an adequate kitchen and dining room.

As Director of the Investment Agency Marko Blagojevic explained earlier to the Belgrade Blic newspaper, the main design and entire documentation should be completed until the year's end, after which a request for proposal will be launched. According to his words, the required funds have already been provided.

About 200 emergency housing units will be built using the money from the account of the Emergency Fund, which became a part of the Investment Agency two years ago. As Blic reported earlier, citing an unofficial source, these emergency housing units will be intended for the employees of companies that had been paying taxes to the Fund until 1 July 2004, regardless of whether they still exist or are privatized.