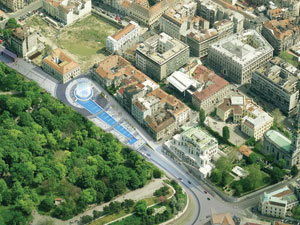 A decades-long wish of the citizens of Belgrade that the pedestrian zone along Knez Mihailova Street be connected with the Kalemegdan Park, that is, the Belgrade fortress, which would mean that they don't have to wait for the green light to cross Pariska Street, may be fulfilled next year, it was announced on the city website.

A traffic tunnel, a pedestrian area and, of course, compliance with the ambience of Knez Mihailova Street - this is how a preliminary design for the area along streets Pariska and Tadeusa Koscuska, stretching between streets Uzun Mirkova and Gracanicka, could be described in short.

– One of the ideas is to practically build an underground tunnel for cars, while tram tracks would stay on the surface, and another idea is to let both cars and trams go through the tunnel - city architect Dejan Vasovic says to Beoinfo.

- As part of amendments to the Master Plan for the part of Kosancicev Venac, enabling the reconstruction of Beton Hala arena and the connection of river banks with the Kalemegdan Park, a possibility of implementing this idea is also taken in consideration -Dejan Vasovic reveals to Beoinfo. 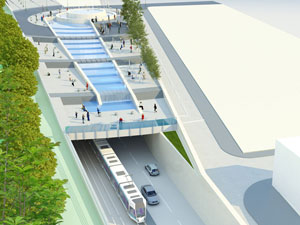 - Traffic analyses, which are being carried out by the Institute of Urbanism, will be included in amendments to the Master Plan, which should be completed until the year's end. That will serve as a basis for the preparation of technical documentation, issuance of a building permit and the execution of works – he adds.

As Vasovic points out, these traffic analyses are based on an idea to build a pedestrian area featuring a fountain, plants and even a belvedere on the top of the underground tunnel for cars.

3D models have already been designed, and this is one of possible solutions for what could be built at the end of Knez Mihailova Street.

– The pedestrian area would actually be an intro to the Kalemegdan Park, with the view of the city center and New Belgrade. It would be about 200 meters long, the same as the underlying tunnel, ending near the monument to Riga od Fere - Vasovic explains. 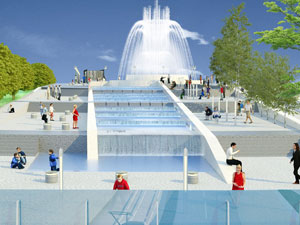 The Master Plan for the part of Kosancicev Venac is primarily being amended to enable spiral connection of Beton Hala arena with Kalemegdan. A novelty in this solution is a possibility of expanding Beton Hala and building a summer stage on the pontoon bridge.

Both projects - a spiral connection of Beton Hala with Kalemegdan and the construction a tunnel and a pedestrian area to connect Knez Mihailova Street with Kalemegdan - would probably be implemented simultaneously because they require redirection of tram and car traffic, Beoinfo reports.