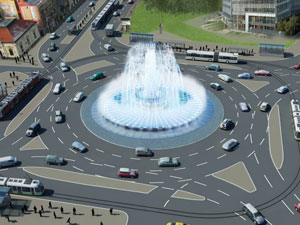 Slavija Square has been left unorganized for decades, which has so far been giving drivers the most headaches. If the plans of Belgrade's authorities come true, the problem of traffic jams may be resolved in 2013. The city administration has recently made some optimistic announcements that the issue of "traffic collapse" at Slavija Square will soon get a positive resolution.

In the future, Slavija may have four pedestrian underpasses, a fountain in the center of the roundabout and tram tracks along its edge. As eKapija learns from people at the city administration, the design of a traffic model is already underway.

- The City of Belgrade has decided to deal with this problem. We will soon announce an architectural design competition – says city architect Dejan Vasovic.

If everything goes as planned, the works may start in 2013. 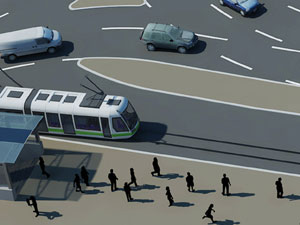 one of the planned pedestrian underpasses

Reconstruction of Slavija Square will allow for the improvement of existing traffic because the flow of vehicles will be boosted and pedestrian underpasses will be built to avoid the intersection of pedestrian and road traffic.

The plan is to place tram tracks along the edge of the roundabout, along with stops and underpasses.

The city architect earlier announced that underpasses would definitely be built under streets Kralja Milana, Bulevar Oslobodjenja and Beogradska, as well as that the possibility of building an underpass beneath Makenzijeva Street was also being considered.

- Just like in metropolises worldwide, there should be a fountain in the center of the square, and the monument to Dimitrije Tucovic will most probably be moved from that location to a green area in the vicinity of the National Bank of Serbia – Vasovic explains. 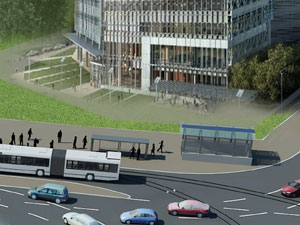 The aim is that Slavija gets a worldly look because it is one of the most significant squares in Belgrade. An architectural design competition should be announced in the second half of the year.

However, we have failed to get the information from the city authorities about what happened with Serbian President Boris Tadic's proposal for building a monument to Nikola Tesla - the Tesla Tower at Slavija Square.