Few steps ahead of others - Mona invests EUR 4 million in reconstruction, expansion of hotel on Zlatibor

In order to offer guests of the famous Serbian mountain a top-comfort accommodation, an up-to-date congress center, the tastiest specialties of national cuisine and numerous interesting services, the company Monda will invest EUR 4 million in the expansion and reconstruction of Zlatibor Mona hotel in 2012, eKapija learns.

- Construction of another section of the hotel, spanning between 3,500 and 4,000 square meters and comprising a big congress center, will kick off in March 2012, when the renovation of complete facility will start as well. Preparation of project documentation is in its final phase, and works will be very intensive. Renovation will be in accordance with the latest European and North American trends, involving the utilization of contemporary technologies, so that the hotel will be open all the time, and the guests should not suffer because of the reconstruction. It will be a facility that has never seen before in the hotel industry in Serbia. Since we have already decided to have the hotel renovated, we want to take a few steps forward - Tomislav Momirovic, CEO of Mona Hotel Management and chairman of the Managing Board of HORES, explains to eKapija.

Zlatibor has already found its place on the map of congress tourism and, once aforementioned 700-square-meter congress center is built, Zlatibor Mona will be able to host large international congresses. 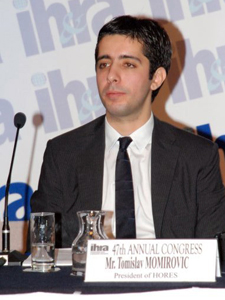 - We want to have a top-quality congress center built, the kind of which now exists only in Belgrade. It will be possible to transform that big space into 5 separate congress rooms to meet the requests of our guests at that moment. We need to have another 30 rooms built in order to also be able to host large international congresses - Momirovic announces.

The hotel now has 90 accommodation units, that is, 201 beds in rooms, studios and suites. There are also special rooms for guests with pets, as well as a room for people with special needs.

- We want every meal to have its story, to offer a different breakfast and dinner every day, etc., so that we are going to have the restaurant and Lada bar completely renovated. We also plan to refresh the wellness center and improve all facilities in order to make our guests even more satisfied.

Although the hotel was completely renovated in 2007, Momirovic stresses that the decision to renovate it again at the time of a crisis may be surprising, but it is definitely justified.

- It's been five years since the reconstruction and the opening of this four-star hotel with a rich offer. The occupancy rate is high, and our guests always return to the hotel. Our wish is to raise operations to a higher level, and our guests seek the same thing. For approximately the same amount of money tourists can go to Slovenia, Croatia, Italy, Hungary. In order to keep the price/quality ratio at a satisfying level, we require novelties. When we bought the facility, it had 27 employees. It now employs 52 people, and additional jobs are expected to be created once the hotel is expanded.

Our interlocutor says that Zlatibor Mona has had a successful year despite the current economic situation, adding that they are satisfied with the business results because they manage to keep the hotel occupancy rate above 70%.

- Competent municipal authorities of Cajetina are satisfied with our idea about the hotel expansion. The project should be presented to municipal officials in mid-January. Communication between catering facilities and the municipality is very important for the survival of Zlatibor as the center of Serbia's tourist offer. Borders are open so that the citizens of Serbia can choose where to go. If we want to survive and make progress, we must raise the level of our tourist offer. Much has been done on Zlatibor mountain over the last five years, but certain municipal issues need to be resolved, and the offer of restaurants and cafeterias has to be improved - Momirovic explains.

In mid-2011 Mona opened the renovated and modernized hotel Javor in Kusici, 24 kilometers away from Ivanjica. A total of EUR 800,000 were invested in the renovation works at the time, and new investments were announced as well.

- The hotel on Javor mountain comprises 36 rooms, and it is intended for youth and sports tourism. Landscapes are beautiful there, and the area is interesting to all those who would like to discover what the Balkans is. The occupancy rate has been increased several times in the last 6 months. We want the hotel to position itself, make some results, and then we will decide in which new facilities to invest.

Mona has started the production, contemporary bag packing and branding of famous Javor's potato in Ivanjica.

- The company invests in agriculture and agricultural land because we see the future in that.

Mona has bought a land in Dorcol in Belgrade in order to build a hotel with 200 rooms, worth EUR 14 million. However, people at the Belgrade-based company say that they still don't plan to start the construction.

- It is now cheaper to buy a new facility in Belgrade than to build a new one from scratch. We are working on land-utilization documentation, but we do not plan to invest soon in the hotel in Dorcol.

The Business Association of Hotels and Restaurants (HORES) operates since 1967, and it today gathers 200 members. The opinion of our interlocutor, who is the chairman of the Managing Board of HORES, is that Serbia should work on the promotion of its tourism offer, primarily in surrounding countries.

- As many as 90% of tourists on Zlatibor are people from Serbia, Montenegro, Bosnia-Herzegovina, Macedonia, and the situation is similar all around Serbia. The state finances tourism promotion in Scandinavian countries, Spain, even Argentina, which is absolutely meaningless. HORES is a member of the Balkan Alliance of Hotel Associations (BAHA) because tourists in Serbia are mainly from the Balkan countries.

- We are doing our best to protect the interests of our industry at all levels. We believe that it is awful that VAT has been increased. Instability in tax policy is a dangerous thing, and it is wrongly thought that that would increase the budget revenues. Local taxes have been significantly increased over the past two years, which creates us numerous problems.

Speaking about 2012, Momirovic says he is sure that it will be as successful as 2011.

- Every time has its advantages, and we will try to use them in the right way.