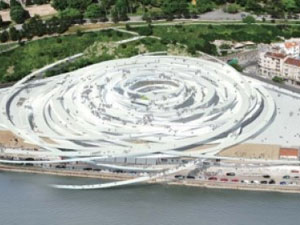 A solution of an architectural team from Japan for the design of the area between the dock on the Sava river and Kalemegdan fortress has been declared the best, along with the proposal of the architects of Belgrade-based ARCVS. According to that solution, the central section of this part of the city will be a so-called "cloud", which will be made of circular ramps intended exclusively for the use by pedestrians.

At an international competition of design proposals for connecting the Kalemegdan park with the area by the Sava river, which was closed in May, two works, of which authors are people from Japan and Belgrade, were declared the best. The authors of both works tried to merge their ideas into one solution, but failed, which is why each proposal was to be developed individually. The City Planning Institute of Belgrade has given the priority to the Japanese solution, but certain ideas suggested by the team from Belgrade will be taken in consideration as well.

- The basis of the structure of future look of this part of the city will be the roof of Beton hall. That will be the central square where a small commercial center, coffee shops, restaurants, stores and other facilities will be situated. It will be connected with Kalemegdan by circular pedestrian ramps - Dejan Vasovic, city architect, told Blic daily.

Works on this area may kick off in about two years.