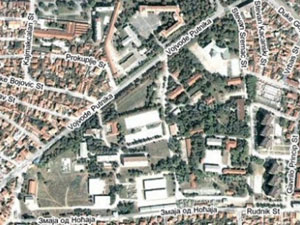 The U.S. company Clean Earth Capital has bought the land of the former barracks Bubanjski Heroji in Nis at its starting price, for about EUR 1.5 million.

According to Harold Bay, director and co-owner of the company, the plan is to build a hotel, a shopping mall, an university and residential buildings on an area spanning over 15 hectares, and it will take between 8 and 10 years to finish the entire complex.

- The university I am talking about will be engaged in applied sciences, electronics, architecture and design. There will also be suites that will be offered for sale or rental. We are not going to build luxury apartments during the first six years, the focus will be on the middle class. The complex will definitely comprise apartments intended for rental to students - said Bay.

It is still unknown when the construction will start, but the investor plans to have the Master Plan completed in 2 months.

The barracks Bubanjski Heroji became a property of the city in accordance with an agreement with the Army of Serbia on the exchange or properties, which was reached in October 2009. According to that agreement, the Army was supposed to allot the barracks to the city and get 32 newly built apartments in return, as well as certain number of apartments within the future complex.