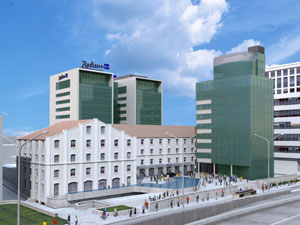 future look of the hotel

The Rezidor Hotel Group, one of the fastest growing hotel companies worldwide, announces Radisson Blu Hotel, Belgrade – the property featuring 236 rooms is already under construction and will welcome the first guests in Q4 2013, it is announced on the website of that Brussels-based company on Monday (7 November 2013).

It is Rezidor’s very first hotel in Serbia; the group is now present in 64 countries across Europe, Middle East and Africa.

- We are delighted to come to Serbia. The country is an emerging nation, and Belgrade is a vibrant, dynamic city with 1.7 million inhabitants where we see a considerable potential - said Kurt Ritter, president & CEO of Rezidor.

The Austrian real estate developer Soravia Group, in cooperation with the Erste Bank Group and the European Bank for Reconstruction and Development (EBRD), is undertaking the development of this prominent hotel and an additional 3,900-square-meter office tower being built in the adjacent area.

- Our development addresses the current undersupply of quality hotel accommodation providing state-of-the-art finishing and service standards. It is among the first major investments of this type in Serbia and we are convinced that market prospects as well as our engagement with Rezidor will ensure a successful and long-lasting venture in Belgrade - said Soravia Group CEO Hanno Soravia.

The hotel will be a local landmark – the overall development of the site will even incorporate an existing historical old mill. Besides 236 rooms with Radisson Blu signature services such as free high speed Internet access, the property will comprise a restaurant and bar, 600 square meters of meeting space, a wellness area, and parking facilities.