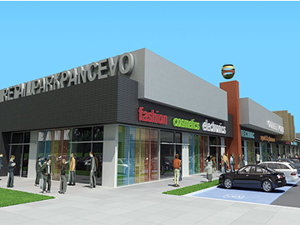 The company Aviv Arlon from Israel will ceremoniously open the first Retail Park in Serbia on May 30. A shopping oasis in Pancevo will span 30,000 square meters and it will gather the trademarks of renowned global and local manufacturers. In addition to boutiques, the offer of the shopping center worth 28 million euros will also include various entertainment contents.

As it was said at the Tuesday's press conference occasioned by the presentation of Retail Park Pancevo, it is a new concept of shopping in Serbia, as well as in the region.

- Instead of indoor shopping centers with artificial light and air-conditioners, we offer a retail park - shopping in an open-air space, with a lot of greenery and numerous accompanying contents for the whole family - said Danka Gladovic, Aviv Arlon Marketing Director in Serbia.

The first phase of the shopping center in Pancevo was finished in April 2010 with the opening of a DIS supermarket, while the second phase of the construction works commenced in November 2010.

- The second phase of Retail Park Pancevo will be finished in May, resulting in a 10,000-square-meter space for 15 companies. We are now negotiating with potential tenants for the space that will be built in the third phase, and we have already signed several lease contracts. After the official opening of the second phase, we plan to start the process of collecting permits for the third phase, of which construction should be finished in May 2012 - Danka Gladovic told eKapija.

People in Pancevo will soon be able to find brands that can also be found in shopping centers in Belgrade, as well as those that have not yet entered the market of Serbia or the region.

- What makes this retail park different from standard shopping centers that can be found in Belgrade is a carefully selected mix of modern trademarks whose prices are more affordable for a much broader target group of consumers. The complex will comprise boutiques, restaurants, coffee shops, as well as game rooms for kids, which will definitely attract families from Pancevo, as well as Belgrade – said Mina Kalezic, marketing director at CB Richard Ellis and manager of the campaign Retail Park in Pancevo.

As eKapija announced earlier, Retail Park Pancevo will in this phase host the brands and contents of the following companies: Takko, Deichmann, JYSK (all three appearing in our market for the first time), Amatti, Golden Rose, Fox Fashion, Tref sport, etc.

- Most shopping centers in Serbia are situated in Belgrade. We deliberately made the decision to have this retail park built in Pancevo. Namely, after getting familiar with the market of Serbia and analyzing investment potentials, Aviv Arlon has chosen Pancevo as an excellently positioned city for the retail park concept thanks to its exceptional connection with Belgrade and other surrounding cities. We are sure that the citizens of Pancevo will be able to recognize and accept the new concept of shopping, of which popularity in Europe is constantly growing – said Neta Saban, marketing director of Aviv Arlon in Israel.