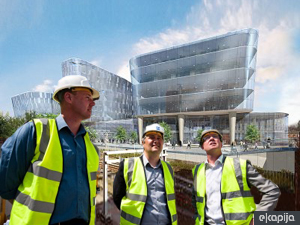 Projects are classified into 12 categories and we are this time presenting top 16 investment in the category of RESIDENTIAL AND OFFICE SPACE.

When we published the article about investments in this category in 2010, we expressed a hope that the new list would include more projects from outside the territory of the capital city. However, the situation has not changed significantly, Belgrade is still the most interesting to both domestic and foreign investors.

The news that about 35,000 people move to Belgrade every year, which has recently been announced by the city authorities, is definitely not good and it is not surprising that the residential complex Stepa Stepanovic in Vozdovac drew the greatest attention of our readers in 2010. The attention of our users was also drawn by residential complexes in Kragujevac and Novi Sad, while foreign companies, banks in particular, were exclusively choosing locations in New Belgrade, Serbia's new "downtown", for their new homes in our country. There were also some projects on the other side of the river and some buildings got their old glory back.

What is interesting is that some futuristic concepts drew a great attention of users, one of which is the "space shuttle" solution of the Science Promotion Center in New Belgrade's Block 39, the construction of which should be finished in 2012.

People who love mountains, winter sports and our tradition were happy to read the news about completion of Sveti Simeon ethno-village on Kopaonik mountain.

Just like the last year, most projects are featured by technologically advanced and so-called "green" construction solutions, but the prices of buildings are now somewhat lower, making them more affordable than last year. 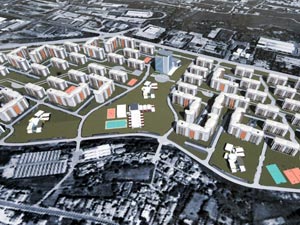 The first-ranked investment is, as it was expected, the housing project in the locations of former Stepa Stepanovic / 4. juli barracks in Vozdovac. Ever since it's implementation was announced, the project has been in the focus of the public because of an attractive price of housing space (maximum EUR 1,290 per square meter) and a big interest of construction companies, as well as because of a controversy - would it have been better if the state had entrusted private investors with implementation of that project and set the clear rules of the game? The public also wondered if the investor - the Building Directorate of Serbia, would be able to cover the expenses of construction of apartments, garages and outlets with the planned price or part of investment would have to be financed by all taxpayers.

According to the Directorate's latest announcements, the first 1,450 apartments will be ready for tenants until March 2012, while all 4,578 will be finished by the end of 2012. About 250 million euros will be invested in this project and about 30,000 people will get jobs. In exchange for the land it has allotted, the Army of Serbia will obtain about 1,000 apartments in the location of the former barracks. 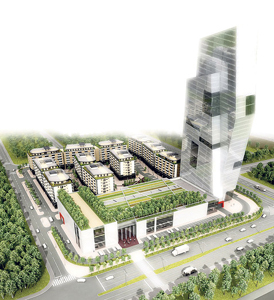 Construction should commence in the first months of this year, while the residential part of the complex, comprising a total of 514 housing units, should be finished in the first of five phases. The whole complex should be built in 2013, while residential space in the complex, situated at the corner of Omladinskih Brigada street and the future route of the Inner Semi-ring Road, will cost less than EUR 1,850 per square meter in the initial phase of purchase.

According to the architectural solution of Fletcher Priest studio from London, the complex spanning 152,437 square meters will comprise a residential section and a business section with 100 outlets and suites, spanning a total of 37,058 square meters. Residential buildings will be situated on the side opposite to Omladinskih Brigada and the complex will be dominated by a 39-floor business tower 146 meters high. The third-ranked investment is the ethno-village Sveti Simeon on Kopaonik, of which villas Anastasija, Jelena, Simonida and Teodora are ready for the winter season. These villas comprise a total of 39 suites, as well as underground garages, stores, a cafeteria, Dvorska Koliba restaurant, and numerous sports contents.

The project investor - Belgrade-based K.B.M. Plus, has announced that this unique complex in the location of Jaram will get another 25 villas, that is, 150 suites, as well as five-star Carski San hotel, a spa center, new sports contents, a square with grocery stores, a restaurant, a ski-cafe, and a magnificent church of Sveti Simeon Mirotocivi, all that prior to 2013. In this complex, which is situated at the height of 1,790 meters and will span a total of 19,500 square meters, alongside the ski tracks Karaman and Jaram, the company will invest about 25 million euros, while 5 million euros have already been earmarked for the first phase. The fourth-ranked investment is New Belgrade's elite complex Maxima Center, which is situated in the vicinity of the Danube Quay, in one of the most attractive locations in New Belgrade - Block 11a. Maxima Center will comprise three buildings with the ground floor and gallery and four to six floors. The gross surface of overground floors and underground floors is 38,700 square meters and 10,560 square meters, respectively, while the entire complex will comprise about 200 housing units.

Maxima Center occupies three building lots and construction on these lots is financed by three investors - Promomedia, Capotto Build, and Imperial Gradnja. Maxima Center should also comprise a hotel from the famous hotel chain Falkensteiner, as well as a business building of Banca Intesa. It is situated close to VIG Plaza business building, the new home of Wiener Staditsche insurance company and other tenants. 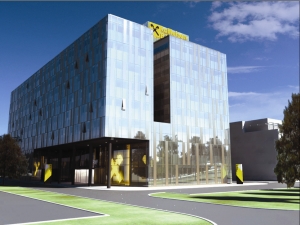 The fifth-ranked investment is the future business building of Raiffeisen Bank in New Belgrade, worth 35 million euros. According to the investor's announcement, the building is expected to be completely finished in early 2012.

A modern facility, of which total net surface will be 18,000 square meters, will be situated in an attractive location in New Belgrade's Block 66a, in Djordja Stanojevica street. Located between Airport City and Belville, this seven-floor business building will be in the vicinity of the future main semi-ring road, that is, a new bridge that will connect that part of the city with Ada Ciganlija. When it comes to its contents, the building will comprise a bank office, a restaurant, a conference hall, training rooms, as well as a modern server room. Office space will be organized according to a modern principle of "open space" concept, and about 1,100 people will be working in that building.

In addition to Raiffeisen Bank, the new business building will also host the headquarters of Raiffeisen leasing company, investment funds and pension fund.

The sixth on our list is aforementioned VIG Plaza business building, one of the first smart buildings in Belgrade. The next on the list is Park City residential-business complex in Novi Sad, of which investor is Aleksandar Gradnja.

The eight-ranked investment is the residential-commercial complex Metropolitan Apartmani in Belgrade's borough of Palilula, followed on the list by Global Kolonija residential-business center in Kragujevac. The tenth on the list is another project in Sumadija - Smallville, while the eleventh is Beogradska Princeza (the Belgrade Princess) - a house that was once known as the Belgrade Briar-Rose is now becoming an exclusive office space in the heart of Belgrade.

The next on the list are business centers Red Stripe and Savacity, the new building of Banca Intesa, Casa di Gloria residential-business complex in Vracar, while the news about selection of the solution for construction of Science Center in New Belgrade is ranked sixteenth.