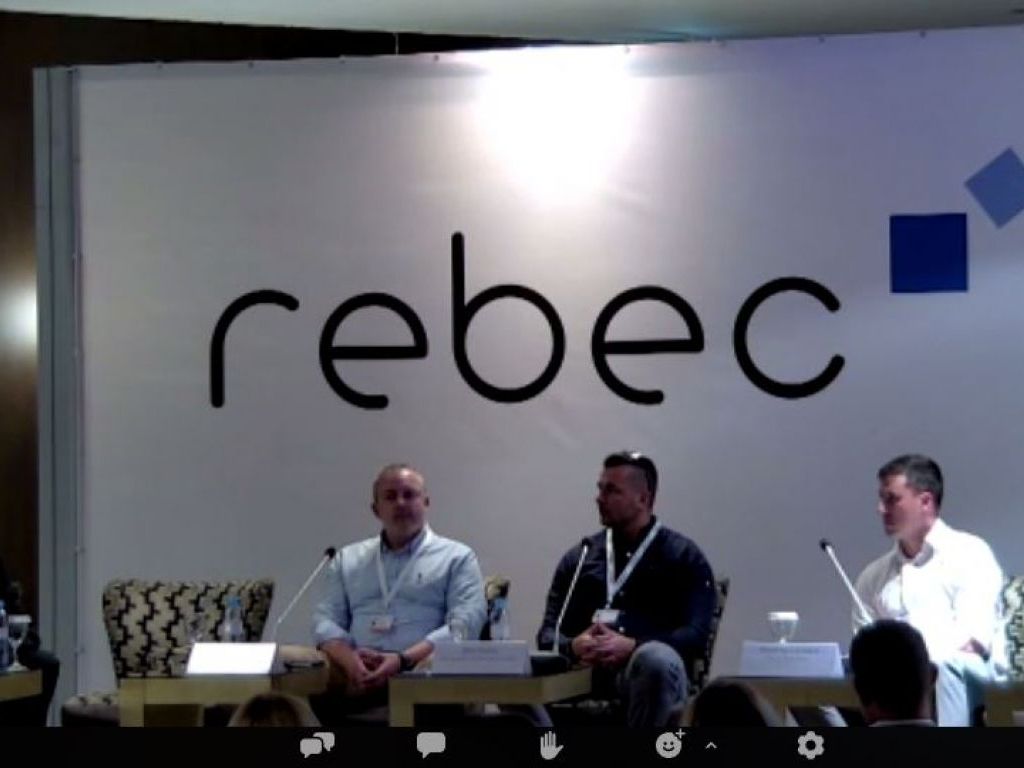 Marin Stenglin, Alen Komic, Miodrag Gazibara (Photo: Screenshot/Rebec/Whova)
The prices of real estate will grow or stagnate at a certain level in the next two to three years, is the conclusion of the panel held within the REBEC 2022 conference.

– Ljubljana is the biggest real estate market in Slovenia, but we have also noticed that a lot of people are withdrawing due to the events first concerning the pandemic and then the war in Ukraine. Everything that happens in Ljubljana somehow follows the events in the region in that sense. Everything depends on the inflation and the prices of construction costs – says Alen Komic, a real estate agent from Slovenia.

According to Marin Stenglin, a member of the managing board of Alfa Stan Group Croatia, the kind of situation that is present today is unprecedented.

– Earlier, a lot more residential units were built, and now it’s all slowed down due to the well-known events. The disturbance in the logistics market has contributed to it as well. What is built today will be even more expensive next year, which puts pressure on people to buy now – Stenglin says.

When it comes to the situation in Belgrade, the numbers are similar as in Zagreb and Ljubljana. The director of Cordon Srbija, Miodrag Gazibara, says that 38% of the purchase of real estate consists of loan-based purchases.

– There are plenty of people who buy real estate which they sell after 3 years, making a profit on the price difference. That way, they raise the prices, because they appear earlier – Gazibara notes.

Explaining the offer of real estate in the capital of Serbia, he says that 40% of the real estate consists of new buildings, and buyers still like to invest and keep their money in real estate form the most.

– Looking at Serbia, Zlatibor rates very highly. Apartments worth around EUR 70,000 and 80,000 are sold there and I don’t see that trend slowing down. A slight slowing down is apparent, which is certainly down to the increase of interest rates as well – he underlines.

Comparing Hungary with Slovenia, Croatia and Serbia, Miklos Nemeth says that, in the past years, there has been a considerable increase in real estate prices in that country as well. As he explained, Budapest, its area and the Balaton region are still the areas where there’s the most construction and purchasing.

– The prices are different and we can observe them through regions. The highest prices are in Budapest and in the Balaton area. Also, toward the Slovakian border, the prices are 3,000 for a square meter – he says.

Plenty of Slovakians are coming to Hungary, buying their second or third apartments, and what’s also interesting, according to Nemet, is that plenty of Germans are purchasing real estate in Hungary, because they are coming there to spend their retirement.

– In Slovenia, buyers are mostly interested in two- and three-room apartments. We have plenty of purchase requests, but our offer is not on that level. The biggest building activities are in Ljubljana – Komic explains.

As he said, most projects are sold out even before the construction is completed, and his advice is certainly to purchase real estate in big city areas.

– Considering the average prices in Slovenia and the prices of real estate, an average salary per family is spent to repay a housing loan.

Slovenians have plenty of funds in the form of savings, but in order to acquire real estate in Slovenia, you have to work a lot – Komic says.

In Croatia, it’s the seaside that interests buyers the most, and, according to Marin Stenglin, the purchasers come from Slovenia, Germany, Austria, Russia.

– Plenty of purchasers also opt for real estate in Croatia due to lower taxes than in their native countries – he says.

The Belgrade real estate market is recording the biggest percentage of the purchase of apartments whose floor area ranges from 75 to 85 m2.

– Talking about new buildings, purchasers are coming from all sides. It’s usually our people from the diaspora, but also from Montenegro, Republika Srpska, or other parts of Serbia – Gazibara says.

REBEC 2022, Volume XV – The Paradox of a Giant Butterfly at the Crossroads of Worlds and Time

REBEC 2022 – Nothing Is the Same in Retail Anymore

As he explained, people from the diaspora have clearer criteria for real estate and they know exactly what they need and what they expect from our market.

In the current era, parking spaces have become necessary if you’re planning a project.

– In Ljubljana, the price of building a garage is three times as high as the construction of one floor with apartments. The standards are such that larger apartments get up to 3 parking spaces, but if investors had their way, they would have one parking space per each apartment – points out Alen Komic.

Marin Stenglin, clarifying the situation in Croatia, says that, since some buyers want up to 4 parking spaces per apartments, when everything is calculated, the construction doesn’t even start if that standard cannot be complied with.

– There are even situations where people are interested in buying only a parking space – he explains.

What awaits us in the coming years?

Considering the trends and the current situation regarding the events in Ukraine and supply chains, as well as interest rate, the participants in the panel agreed that they didn’t expect the prices of real estate to drop.

– Although we are noticing that the market is settling down, we still don’t know what awaits us in September and October. An important factor in forming the price is the growth of interest rates, so I believe that, in the next two years, the prices will certainly not drop. They can only go up – Komic concludes.

In Croatia, investors are expected to be interested in construction, because there are numerous requests for the purchase of real estate.

– Although the prices have never been this high, I believe that they will slow down and stop at a certain level – Stenglin says about the expectations for the Croatian market.

Clarifying his position, Miodrag Gazibara says that, in the next 2 to 3 years, he doesn’t expect major changes when it comes to prices.

– I believe that the prices will go up 10% each year in the upcoming period – he concludes.