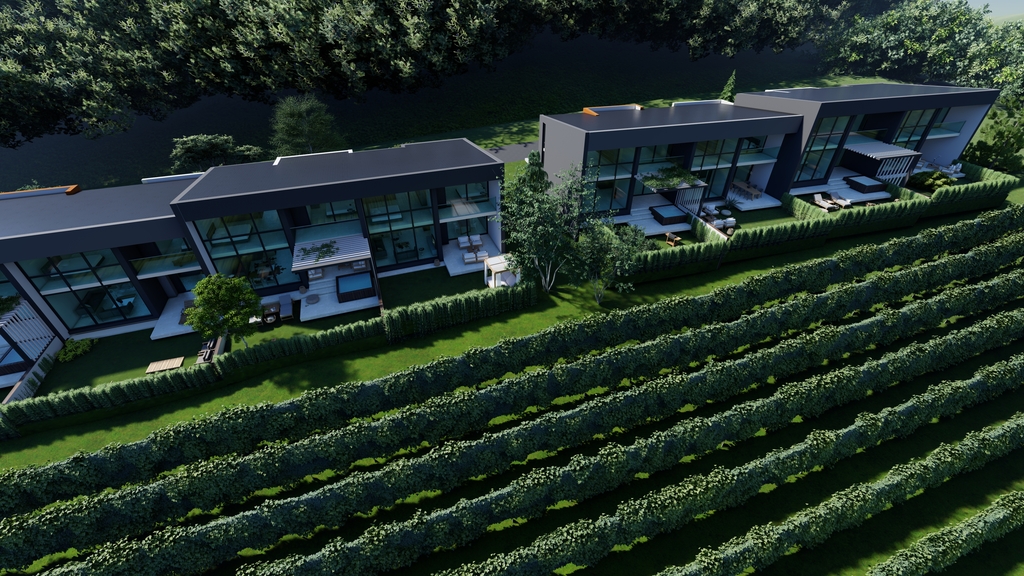 Villas in a row (Photo: MiProjekt)
Not so long ago, eKapija wrote about how Kosmaj and Avala were becoming “a new Dedinje”, with an increasing number of luxury villas being raised on these Belgrade mountains, and we are now presenting a project which raises life on Kosmaj to a higher level.

For many, luxury living among vineyards is an association to the famous Napa wine valley in California. That is precisely what inspired the owner of the company Kosmiko doo Beograd, Miroslav Stanojevic, to start the project of the construction of a resort concept that is unique in Serbia, HedoWine, at the foot of the Kosmaj Mountain, in the village of Nemenikuce.

– I initiated the whole idea in 2012 by purchasing land in the little village of Kosutica and establishing the vineyards. The concept, which initially entailed a hotel and several apartments, grew into Kosmiko Hill, a luxury resort – condominium, which is a combination of urban luxury and nature, with villas, vineyards, a winery, restaurants, a spa center… – Stanojevic, who has lived in Napa himself, says for eKapija. 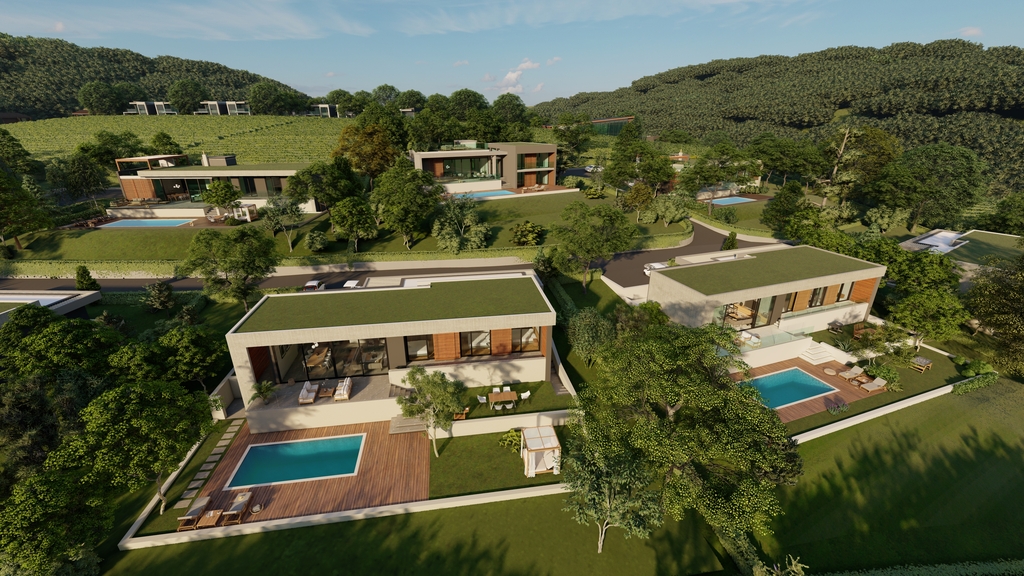 At the complex worth EUR 20 million, according to our interviewee, the works on the first phase of the construction are currently being completed, and once it is fully finished in the third quarter of next year, Kosmiko Hill will spread on 200,000 m2.

– The complex will encompass 34 villas, of which 12 villas in a row, 10 villas with a total of 40 apartments and 12 luxury villas with pools. The vineyards will take up 100,000 m2, and the residents will be provided with a wellness and spa center, a winery, two restaurants and a cafeteria. 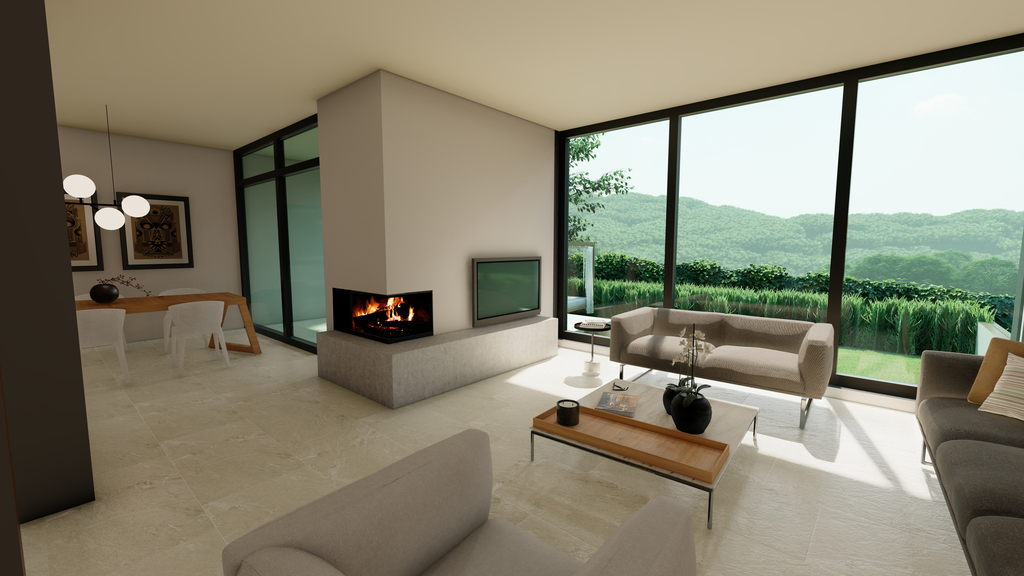 A view to the vineyards (Photo: MiProjekt)

What’s also interesting are the names of the villas, which are conceptually divided into the “forest” and “garden” parts of the resort, depending on whether they are overseeing the vineyards or the forest. The first ones have appropriate plant names, such as Ruza (Rose), Maslacak (Dandelion) and Lepi Jova (Impatiens), whereas others are named after famous painters, such as Dali, Monet, Picasso and Van Gogh, and feature private pools and flat green roofs.

– A special villa, called Michael Roth, a conceptual ground-floor villa with a pool 28 meters long and a wellness block, made from larch wood in the style of French chalets, is also planned in the complex, and it is meant for an American citizen who is moving to Serbia to live here – Stanojevic says. 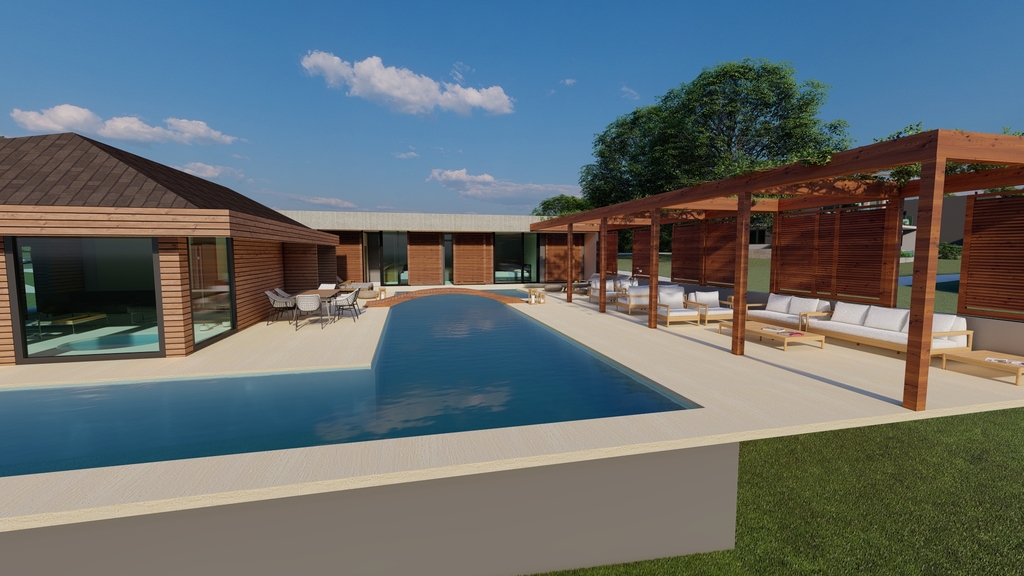 A special feature of the Kosmiko Hill settlement will be a wellness-spa center, as well as vineyards and a winery.

– The wellness center, called Okinawa, will feature a large panoramic indoor pool with 2 hydro blocks, a spa section with 4 types of saunas, a relaxation room with water beds, a cardio gym and a physical therapy block with a physical therapy center and massage rooms – Stanojevic says. 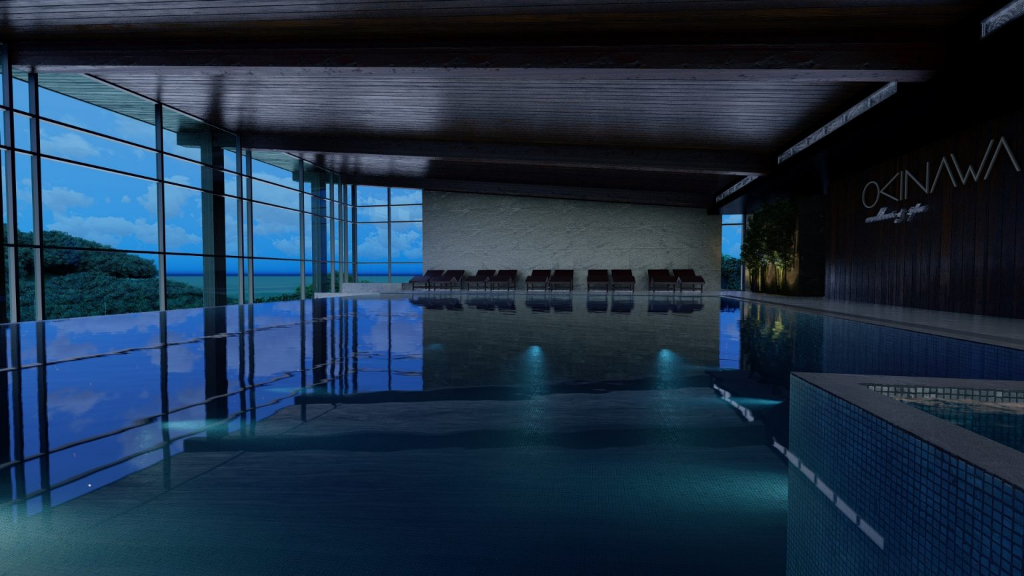 The pool at the wellness and spa center (Photo: MiProjekt)

When it comes to the winery, the production of wine, he says, started back in 2017.

– The Vinokratija winery produces the labels Mangup, Zeecer and Ringispil from the Cabernet Sauvignon, Chardonnay, Merlot and Tamnjanika varieties, and the distribution of the production of 25,000 bottles a year is done by the company Calix doo from Belgrade. The master plan of the project envisages the construction of a special winery facility within the complex, with hospitality features – reveals eKapija’s interviewee. 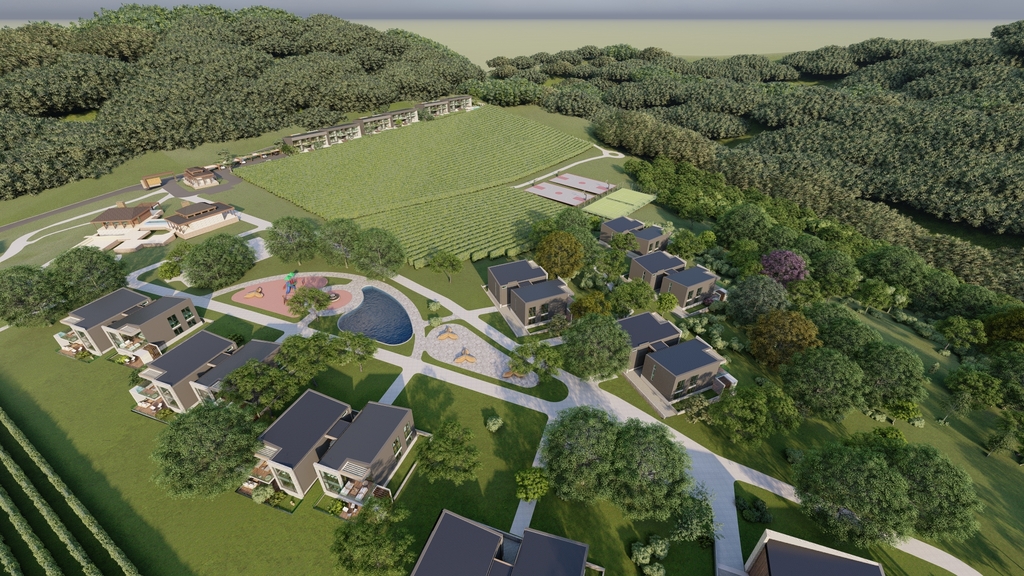 The residents will have at their disposal multifunctional sports courts and trekking paths, and Stanojevic adds that the concept of the Kosmiko Hill resort promotes renewable energy sources and nature protection and that the internal traffic in the complex will therefore be done exclusively by small electric vehicles – golf carts and electric bicycles, with the implementation of solar panels and the processing of waste waters through bioseparators for getting technical water for irrigation.

The complex was designed by the married couple Tamara and Milorad Povlenovic from the Belgrade design studio MiProjekt, and Kosmiko Hill is being built by Stanojevic in partnership with the company Sloga Construction from Kragujevac, which is the main contractor.