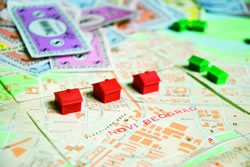 The investment year 2010 is slowly nearing the end. Those imaginative were presenting their ideas, while the courageous realized them in this difficult time when banks are not so generous in offering a financial support and the market is not asking for too much new space. However, the list prepared by eKapija's investment team shows that the situation is not that bad after all, that there is plenty of projects initiated in Belgrade and that most of them are still being implemented.

The list was created on the basis of the number of readers of the texts about projects and investments on web portal ekapija.com, and the number of 15,400 commercial users, 72% of whom are either owners or directors of domestic companies, shows with great reliability how the market reacts to these projects and what draws the biggest attention of the business world.

Therefore, take a look at this list and compare it to your own thinking.

PSP-FARMAN's CENTER IN BLOCK 65 IN NEW BELGRADE – An exceptionally bold investment idea - the announced construction of a residential-business complex worth 170 million euros in New Belgrade's Block 65, still awaits the beginning of realization. The investor is PSP-Farman, led by Branislav Grujic, and the complex will be dominated by a tower 146 meters high, which will be the highest building in Belgrade if all the urbanistic barriers are overcome.

The facility will meet all ecological and sustainable standards thanks to various innovative technologies such as the use of renewable energy sources, ecological materials, etc. The innovations will include the use of subterranean waters, precipitations, and a part of the energy needs will be satisfied by the wind energy and the energy produced by the solar panels installed on the complex.

TOURIST-SPORTS COMPLEX PASINA CESMA (PASHA'S FOUNTAIN) IN LESKOVAC - An exclusive hotel with 5 stars, sports facilities and fields, eco-park, artificial lake, Zoo, horse farm - are only some of the contents of a magnificent tourist-sports complex that Emirates Power Contracting & General Maintenance company from Arabia plans to build within the next two years in the location of the famous picnic grounds in Leskovac - Pasina Cesma (Pasha's Fountain). In this complex on 86 ha, situated 8 kilometers away from Leskovac, Emirates Power is going to invest 10 million euros.

BRAND OUTLET BELGRADE – EYEMAXX - After the logistics center at Konstantin Veliki airport in Nis, Austrian Eyemaxx has presented its first outlet center in Serbia to the public. The model for this outlet center is Austrian Parndorf. The investment is worth 35 million euros, the facility will occupy the surface area of 9 ha and it will be built on 50 ha of land, next to the first exit of Belgrade-Novi Sad motorway.

TOURIST COMPLEX ON STARA PLANINA MOUNTAIN - The first four hotels of a modern ski center on Stara Planina mountain, which will be run by Spanish leading hotel chains HG Hotels and Sol Melia, should be built by the end of 2011. For the investments in the tourist complex on Jabucko Ravniste, the Republic of Serbia and international investment fund Sigma Capital will set aside between 50 and 60 million euros in the first phase when 500 beds will be made ready for use. The plan for the start is that the all-season complex on Stara Planina comprises 6 hotels with 900 beds, while the construction of facilities will run parallel to the investments in the ski infrastructure. By the end of 2011, in addition to two existing ski lifts, another two four-seat ski lifts and the first gondola in Serbia will be put in operation.

BELGRADE ART HOTEL (BAH) IN KNEZ MIHAILOVA STREET – Belgrade has finally got a hotel in Knez Mihailova Street, and all the papers wrote about the glamorous opening and a surprisingly good visit in the first few days of the life of this hotel, which is opened in former Progres building that is now completely reorganized. There are 50 rooms, 5 suites a bar, a restaurant, a sauna and 2 conference rooms on 9 floors. Belgrade Art Hotel operates within Todor Hotels, a part of which is also Aleksandar hotel, and it is owned by Vrnjacka Banja-based Todor.

BELGRADE OUTLET SHOPPING CENTER – Another outlet center in the vicinity of Belgrade, created thanks to the investment of Blackoak Developments company, will represent the first "factory outlet" center in Serbia. The complex will be situated in an exceptional location, alongside E75 highway, in the municipality of Indjija, half the way between Belgrade and Novi Sad, and only 25 minutes of driving away from these two biggest cities in Serbia. Total surface area of the center will be 30,000 square meters and it will comprise 125 outlets designed by the world's latest architectural standards.

THERMAL RIVIERA IN BOGATIC – The investment clients and the clients interested in enjoying themselves are impatiently waiting for the news about the commencement of the construction of a swimming pool complex close enough to Belgrade and most cities in northern and central Serbia. Namely, Termalna Rivijera (Thermal Riviera) company and Ljubisa Dragovic have announced the construction of a tourist-recreational complex for resting and recreation, which will use the geothermal potential of the Macva region, while the total surface area on which the investment will be realized is 20 ha. The complex will also include two hotels, one of which will be for rehabilitation, while the other will comprise sports contents, as well as a suite complex with 130 single-floor houses. The guests of this tourist complex will have at their disposal an unusual water attraction with indoor and outdoor thermal pools, an Olympic swimming pool and a pool for kids, a pirate island, a beach with waves and a tower with spiral water slide. The real Caribbean in the middle of Macva!

HOLIDAY INN HOTEL NOVI SAD - Although it was announced much earlier that the second hotel of world-renowned hotel chain Holiday Inn in Serbia would be built in Kragujevac, Novi Sad has taken that position. The project for the construction of a facility at 8,500 square meters, at the crossroads of Subotica Boulevard and the Futog Road, was presented at the Tourism Fair in Belgrade. The investor - Aleksandar Gradnja, is going to invest about 11 million euros in this hotel, and that will be the first hotel in the capital city of Vojvodina to operate under an international brand, with 4+ stars. The project includes the construction of a wellness zone with an indoor swimming pool, a conference center with several multifunctional halls, a restaurant with international cuisine, and other additional contents…

MK MOUNTAIN RESORT ON KOPAONIK MOUNTAIN – After taking over the hotel-accommodation capacities on Kopaonik mountain, MK Group has started a very significant investment activity aimed at introduction of a new spirit and offer in this representative complex on the most famous mountain in Serbia. The complex consists of Grand hotel with 4 stars, Angella hotel with 4 stars, and Konaci-Suncani Vrhovi Suites with three stars. The plan is that "Family" concept be introduced in newly opened four-star Angella hotel. Such concept exists only in Austria and is based on the contents intended for family and a quality family vacation.

ST. SIMEON ETHNO-SETTLEMENT ON KOPAONIK MOUNTAIN – Another attractive idea on Kopaonik mountain,. Namely, Anastasija, Jelena, Simonida and Teodora - the first four villas in St. Simeon ethno-settlement on Kopaonik, will open the doors of their suites during the forthcoming winter tourist season 2010/2011. Within the villas, which will have a total of 39 suites, there will be underground garages, ski rental stores, shops, a cafeteria, Dvorska Koliba restaurant, as well as numerous recreational contents. The project investor - Belgrade-based K.B.M. Plus, has announced that this unique complex will get another 25 villas with 150 suites by the year 2013, as well as five-star Carski San hotel, a spa center, new recreational contents, a square with stores, a restaurant, a ski-cafe, and the magnificent church of St Simeon Mirotocivi. In the complex at 1,790 meters above the sea level, which will occupy the surface area of 19,500 square meters, next to Karaman and Jaram ski tracks, the company will invest about 25 million euros, while 5 million euros are earmarked for the first phase. The Anastasija villa has already found its buyer, while the negotiations on the sale of other three queens are underway.

HORIZON SWIMMING&SPA AQUA CENTER ON THE DANUBE, IN SURDUK – On the very cliff, 50 meters above the Danube in Surduk, with a beautiful view of the river and Banat, a complex of swimming pools, bars and parking lots was opened in mid-summer 2010, as a part of the future sports-recreation-tourist center. The constructed complex is situated on the very edge of the territory of the municipality of Stara Pazova and, in case the purchase of the part of the land in the municipality of Indjija is made possible, the center will be supplemented with a hotel, a restaurant complex, an indoor swimming pool, a pier, and a marina.

MARINA OASIS IN GROCKA – Another investment idea related to the future tourist-recreation center in the vicinity of Belgrade has deserved its place among TOP 12. It is, namely, a future pearl of nautical, sports, gastronomic and recreational tourism of Belgrade, as well as Serbia. It is planned to comprise nice suites, a hotel, indoor and outdoor swimming pools, an athletic track, restaurants, sports halls, tennis courts, an attractive marina… The idea of development and upgrading of the former holiday hostel of Investbanka into the new tourist-nautical center is being realized by Belgrade-based Appraisal Associates company, under the management of Dragan Jovanovic.