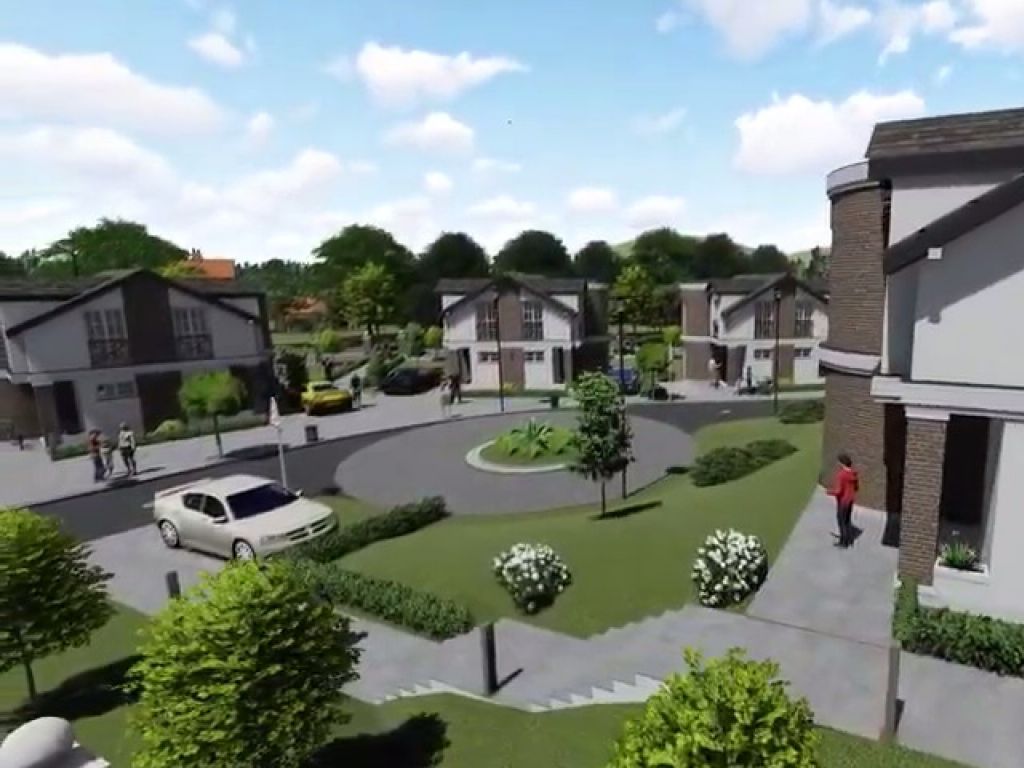 (Photo: Youtube/Banja nekretnine/snapshot)
In the USA, “gated community” is the usual name for a settlement of a closed type, a fenced-off settlement. We all know, mostly from movies, what these settlements look like more or less – they are located in suburbs, have a fence and a gate, often a guard as well, video surveillance, developed streets and, along them, rows of similar-looking houses, with neat lawns. There are no cars peppering the sidewalks, no garbage in the streets, children play freely in front of the house. Greenery, privacy, safety… In other words – the American dream.

These and similar gated communities are slowly appearing in Serbia as well. There are very few of them at the moment, but it is apparent that they are paving the way for a new trend in housing in Serbia, considering that, according to investors and real estate experts, this type of housing is increasingly interesting to clients. 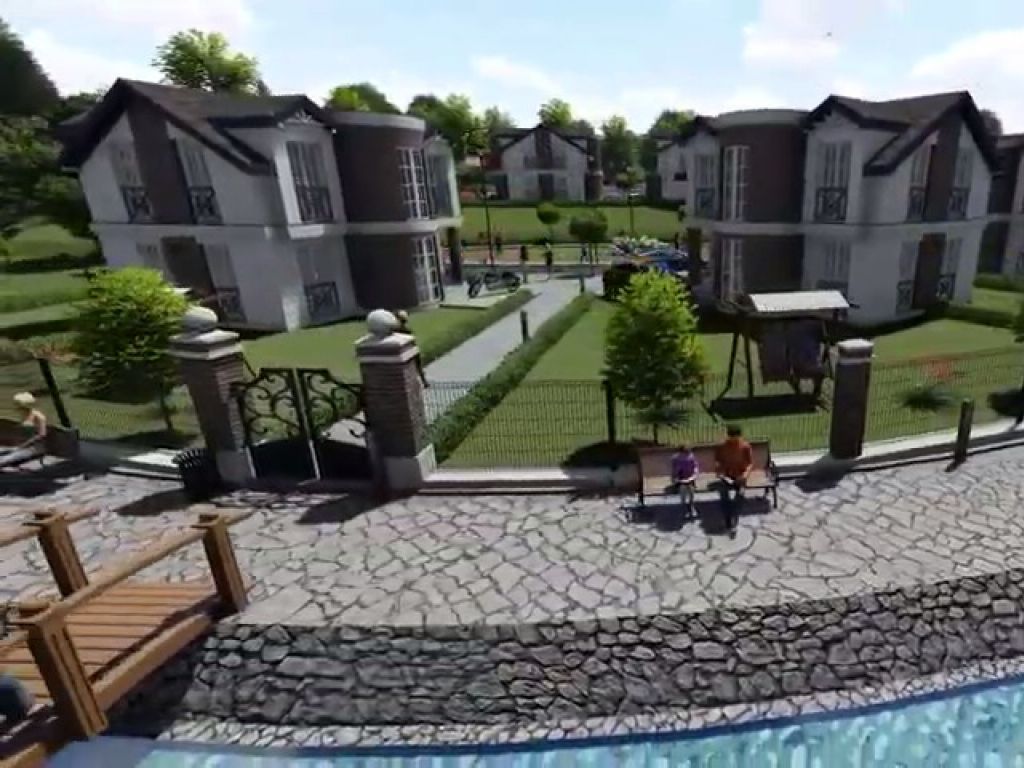 (Photo: Youtube/Banja nekretnine/snapshot)
One such gated community is being built in Vrnjacka Banja, in an isolated place, but still close to the promenade.

The closed-type gated community Royal Villas Club is being built by the company Dva Brata Gocanin and consists of 11 houses. The project was prepared by Studio Arhitekton I.D, as eKapija already reported back in July, when we announced this project.

– The houses are split vertically and one vertical has a surface of 54 m2 and costs EUR 80,000 with the VAT. For that price, you get a part of the yard and a parking spot. The houses feature floor heating – Banja Nekretnine, the company which has the exclusive sales rights, says for eKapija. 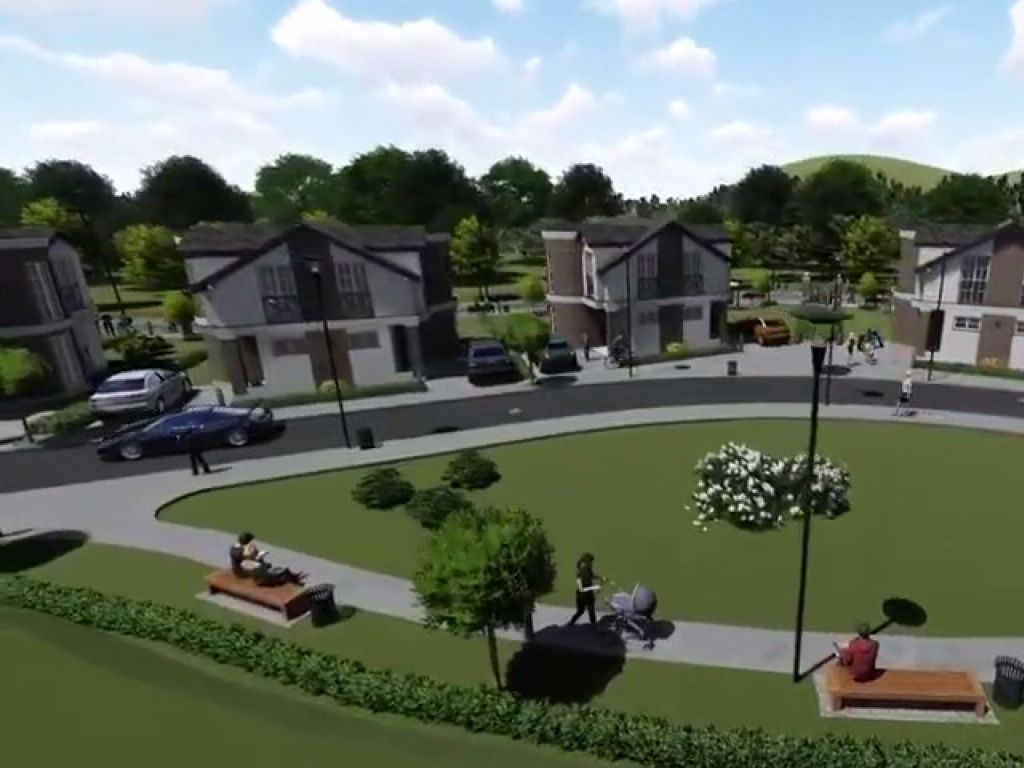 (Photo: Youtube/Banja nekretnine/snapshot)
As they point out, the settlement, whose construction is close to completion and is expected to be finished by the end of the year, will have a barrier, video surveillance and a guardhouse at the entrance. The construction of a shared pool is planned as well.

The tenants, or those who will only visit the settlements on weekends, depending on what the purchasers intend to use the housing units for, will also be provided with a service for the maintenance of green and other areas.

– The advantage of this kind of a settlement is certainly that it is bordered on all sides, so you can allow your children to spend your time at the playground, located within the complex, without worrying. That is why there are plenty of interested buyers, because Vrnjacka Banja does not have such fenced-off settlements which provide safety and privacy, and they are rare in Serbia in general too, considering that this kind of a housing and living concept has not yet taken root here – they say at Banja Nekretnine and add that some houses have already been sold and that people mostly buy whole houses and not just one vertical, so as to have additional privacy.

Another closed-type settlement is being raised on the slopes of Fruska Gora, 10 minutes away by car from the Novi Sad center. The construction of the second phase of Solarna Dolina (Solar Valley) – a gated community with a barrier which only lets in the tenants and blind alleys without traffic – has begun there. 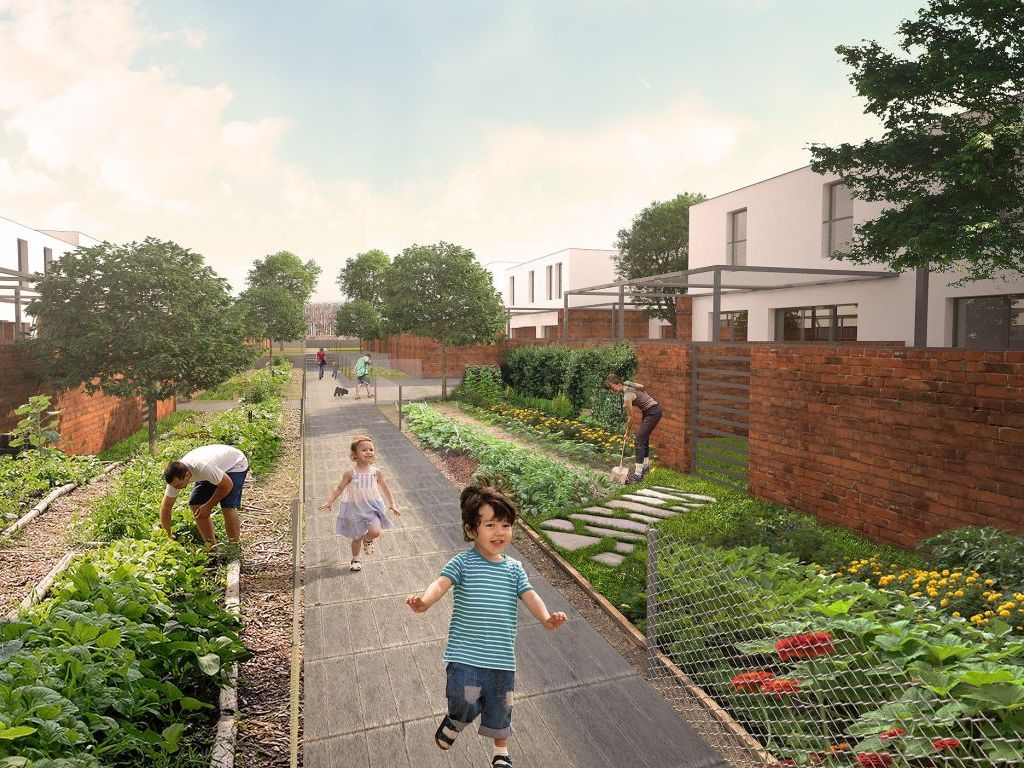 (Photo: Slobodan Jović)
According to Nikola Dzolev, one of the directors of the company Solarna Dolina-Invest, which is the investor in the project, the construction of the first of the five planned internal streets, which will feature 16 residential units in a row, to the left and to the right, is in progress.

– Houses of S, M and L (small, medium and large) sizes will have a ground floor and an upper floor and an independent entrance, as well as a parking lot, and each one will also have its own yard, which can be entered from the living room. These are smart and energy-efficient houses, with digital regulators of the temperature, blinds and the full lighting through a mobile app, as well as individual heat pumps for the floor heating, central cooling and preparation of sanitary hot water. Also, the flat roofs of the facility allow for the installation of solar power plants per the tenant’s wishes. The houses will take up only 28% of the area of the settlement, and the rest will be additional features and greenery – Dzolev says for eKapija. 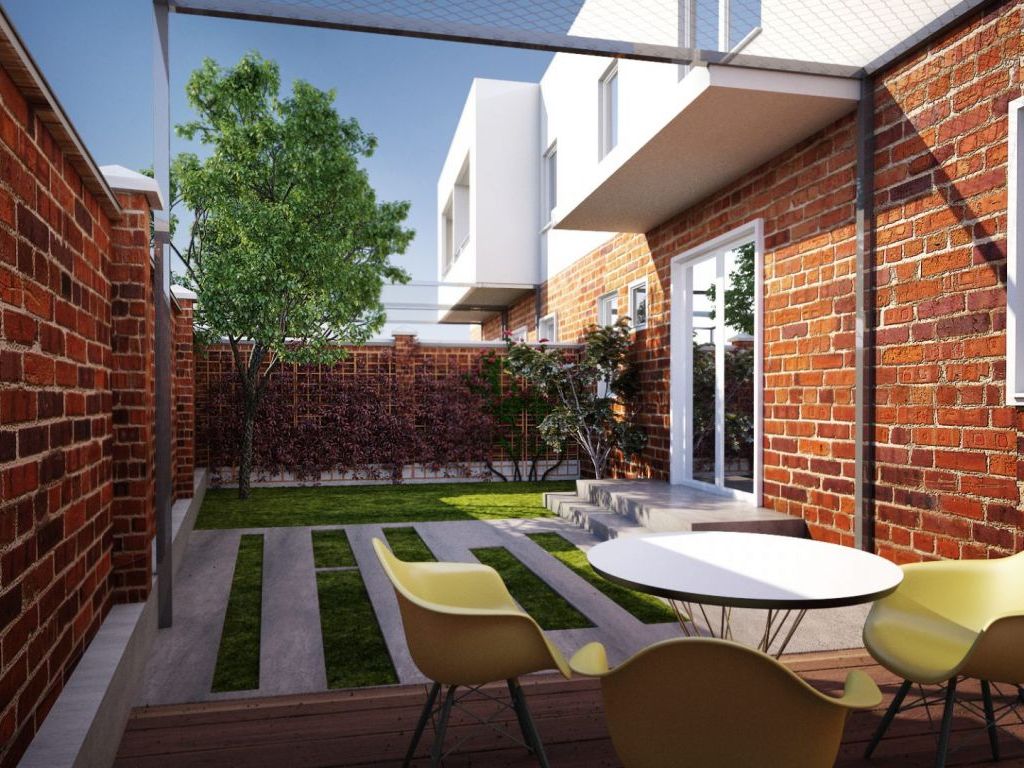 (Photo: Slobodan Jović)
Solarna Dolina will have various shared features, such as children’s playgrounds and an open gym, promenades, sports courts, green areas and a network of pedestrian and bicycle lanes throughout the settlement, and the technical maintenance service will take care of their development and maintenance, as well the security of the settlement.

The future tenants will also be provided with developed parcels for biogardens in the zones with the most sunlight, with central irrigation and joint maintenance, where they will be able to grow their own food. 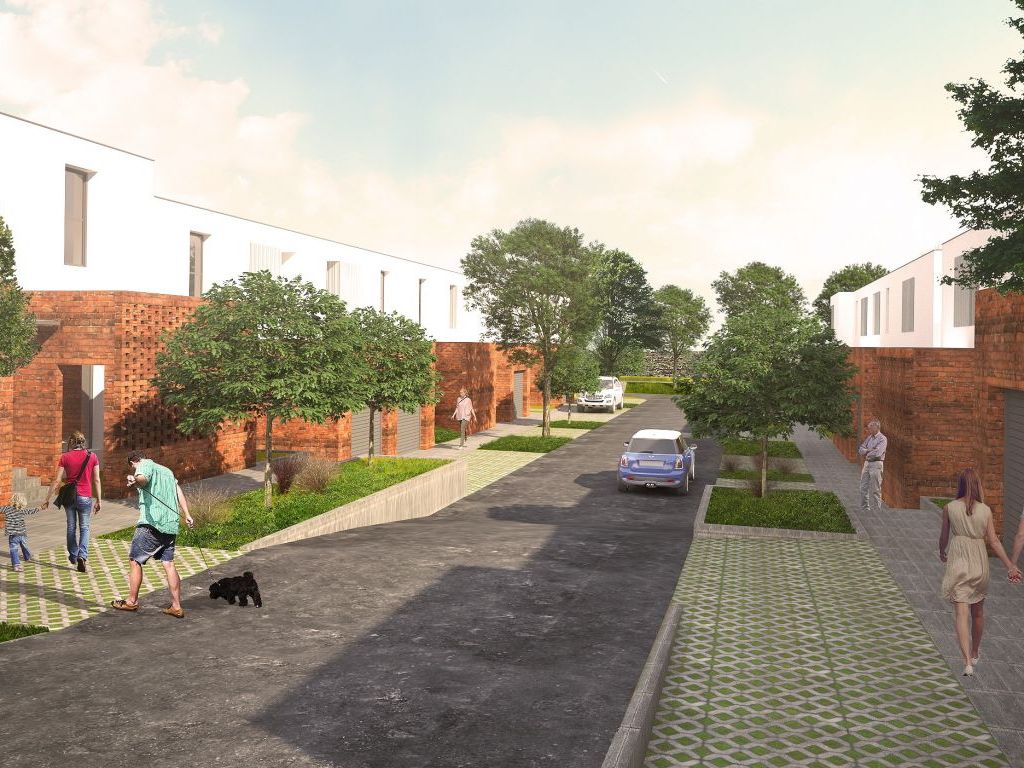 (Photo: Slobodan Jović)
– The buyers are satisfied and we already have pre-reservations for houses in the second phase of the construction. In Serbia, there are no settlements of this type, in an “American style”, fenced-off and with houses in rows and private yards, so there are plenty of interested people and we plan to build more closed-type settlements after Solarna Dolina – Dzolev says for our portal.

Finally, at the Silver Lake, there’s also a plan to build a closed-type settlement.

This has been confirmed for eKapija by Mitar Jovic, the director of the company Silver Lake Investment, which already has built tourist capacities at the Silver Lake, within the Silver Lake Resort complex. 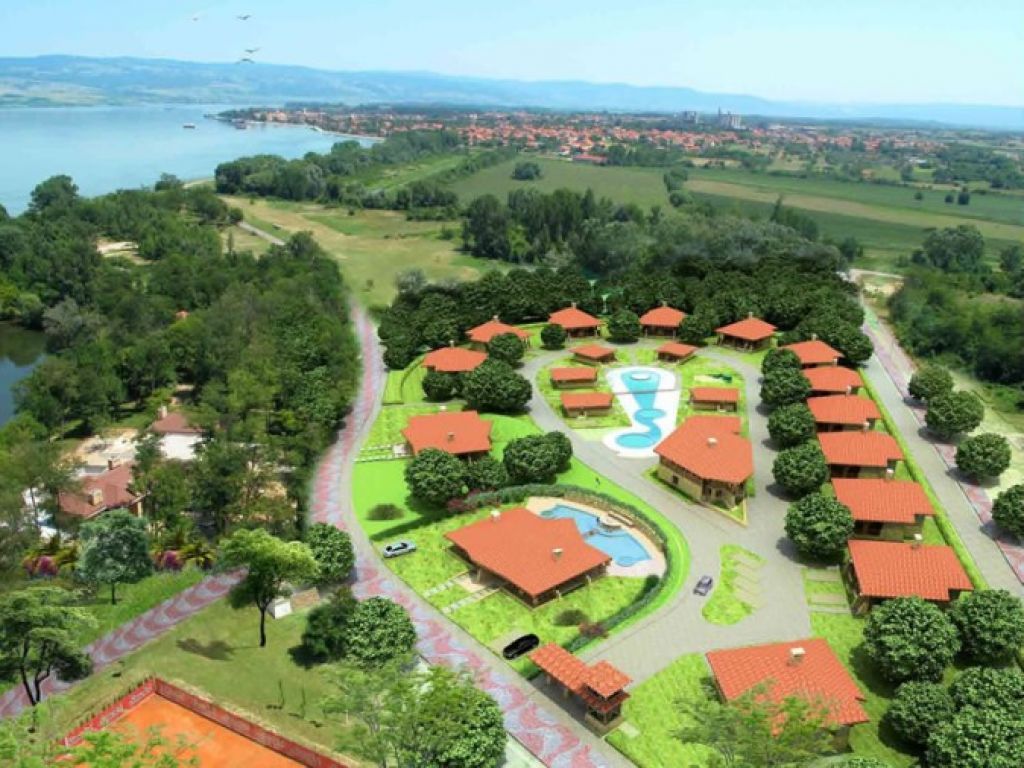 (Photo: Silver Lake Investment)
– The settlement will be fenced-off, have security, controlled access and joint maintenance, 20 to 30 houses for sale with surfaces of 60 to 120 m2 and two pools – Jovic announced.