Plan for Dunavgrad – Business Parks, Wholesales, Residential Facilities and Other Features to be Built in Palilula, Between Pancevo Road and Railway, on 293 Hectares 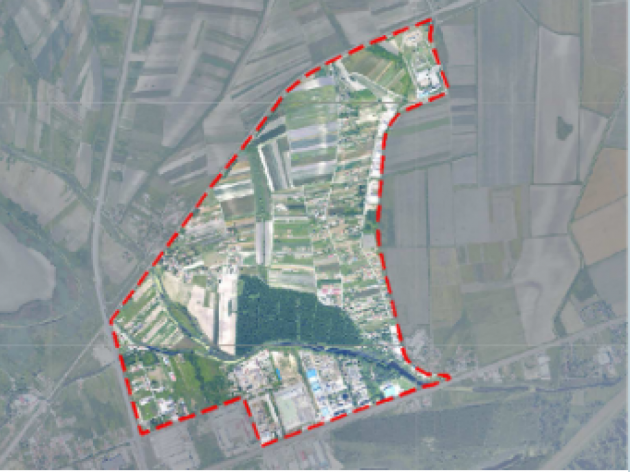 Illustration (Photo: Elaboart o nacrtu plana detaljne regulacije Urbanističkog zavoda Beograda/printscreen)
The forming of a new business zone with a residential zone is planned in Palilula. On an area of 293 hectares, the plan is to build business and residential complexes.

At the initiative of the Belgrade Land Development Public Agency, a study of the detailed regulation plan for the area between the outer main road tangent, the Pancevo Road, the canal 5-39 and the Belgrade-Pancevo railway was prepared.

According to the study, at the moment, the majority of the area is occupied by agricultural land. Considering that some parts already feature facilities meant for business activities, which encompass an area of around 39.5 hectares, and a zone of individual residential construction, which spreads on 17.8 hectares, the new plan aims to repurpose the land and use the economic potentials.

As part of that goal, the plan is for a part of the space to be reserved for the construction of public purpose facilities – a kindergarten and an elementary school. The plan is to build two facilities on a total area of 2.5 hectares. The kindergarten will have a capacity for 558 children, whereas the capacity of the elementary school would be 760 children. The exact location of the construction of these public facilities is not yet determined and will be defined later, with the final preparation of the plan.

As for the existing business facilities, the plan is to form an area for business zones which will spread on around 49.6 hectares, with the aim of establishing a functional whole. In addition to the facilities meant for the economy, the construction of complementary commercial features will be possible here as well, so as to ensure the optimal functionality of the space. The study also defines the construction parameters, which envisage that the minimal construction parcel has an area of 2,000 m2, that the maximum height of a facility (including the roof) is 15 meters and that the minimal green area in direct contact with the ground covers 30% of the area of the parcel.

In order to increase the economic attractiveness of said space, the plan is also to establish a zone meant for the construction of business parks on an area of 42 hectares. For this zone, the forming of a green area at the borders of the space, is mandatory, and, according to the proposed parameters of construction, the minimal area of a parcel will be 1 hectare, with a maximum facility height of 16 meters and an occupancy index of 60%.

On an area of around 27.7 hectares, a zone for commercial features will be formed. The zone is to be formed with the aim of fully organizing a functional whole for the purposes of the economy. According to the plan, the construction of sales salons, retail and wholesale facilities, storage facilities and warehouses will be possible here. The parameters of construction for this space define the minimal area of a construction parcel of 400 m2, facility height of 12.5 meters and a parcel occupancy index of 30%.

In addition to business and commercial features, the majority of the space covered by the plan will be occupied by a residential zone, which will spread on 98 hectares. The study points out that, for this area, the plan is to maintain the current quality of housing, with a large share of green areas. The parameters of construction are proposed in line with this. The minimal area of a parcel is 600 m2, the maximum height of a facility is 9 meters, the parcel occupancy index is 30%, and the orientation structure of the future residential facilities is ground floor + upper floor. Since one section already features residential facilities, the study points out that all the facilities that exceed said dimensions will be retained.

Special focus is placed on the development of traffic infrastructure, so as to ensure the full functionality of said space.

The space touches the second part of the planned Ive Lole Ribara Street to the east, whereas, to the west, there’s the North Tagent traffic route (B-grade state road 13). On the south side, there is the Pancevo Road, and the plan defines for both said traffic route to retain the rank of main roads.

Elements of the traffic solution of the road infrastructure in the form of numerous connections to the main roads will be subsequently defined in cooperation with the expert services during the preparation of the plan.

The keeping of the existing secondary street network within the area is planned.

The study does not leave out the development of rail traffic either. According to the documentation, the plan is to build tracks that diverge from the Belgrade-Pancevo railway, which would serve the planned port in the zone of Pancevacki Rit.

The conclusion of the published document, which was prepared by the Urban Planning Institute of Belgrade, says that the aim of the preparation of the detailed regulation plan is to increase the economic attractiveness of the area and to incite the urban-economic renewal through the new construction of residential, economic and commercial features.