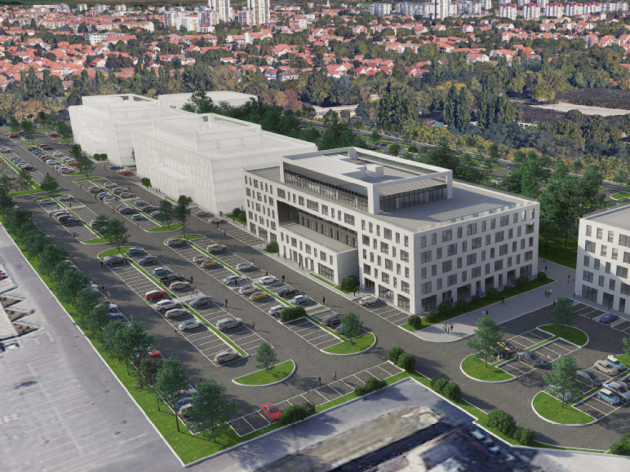 Illustration (Photo: Architectural design & investments consulting Bureau Cube Partner/Urbanistički projekat/printscreen)
An office complex of 69,980.13 m2, consisting of four buildings, is to be built in the location of the former complex of the Zmaj factory in Zemun, by the Sid highway.

According to the documentation, due to its complexity, the future complex will be built in two phases. At the moment, the urban project for the first phase has been developed, entailing the construction of Facility A and Facility B, with six floors (including the ground floor and the loft), with a total area of 30,881 m2.

These two office buildings will be raised as free-standing facilities with a special organizational structure of the space, using the “shell and core” system, which leaves the possibility of having an office space spread across an entire floor or being split into several units, depending on the needs of the future tenants.

The ground floor of Facility A is to feature the main entrance hall, a communications space, elevator shafts, technical rooms, toilets and “shell and core” office space. The remaining five floors will be meant for office spaces which can also spread on an entire floor or be split into several units. The second facility, in the first phase, features the same design.

According to the documentation, following the approval of the urban project for Phase I, the preparation of a new project for Phase II is to start. Phase II will entail the construction of another three facilities (C, D and E). Facilities C and D will have the same structure of floors as facilities A and B, whereas Facility E will have five floors (including the ground floor and the loft).

All the facilities within the future business complex Zmaj were designed the same way and feature the same architectural characteristics. According to the carrier of the urban project, this form was chosen because it makes for a unified visual identity of the entire complex.

The investor in the construction of this business complex is Afi Zmaj West, whereas the projects were prepared by Bureau Cube Partners d.o.o. from Belgrade.