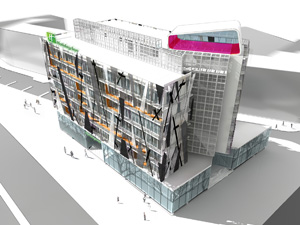 The contract on construction of Holiday Inn hotel in Novi Sad was signed yesterday (April 14, 2010) in Banovina in the presence of Dr. Bojan Pajtić, the Prime Minister of AP Vojvodina.

The contract was signed by Peter Vermeer, the Vice President of the world's largest hotel chain International Hotels Group (IHG), and Vojislav Gajić, the investor and owner of Aleksandar Gradnja from Novi Sad.

PM Pajtić pointed out that that was a significant news for the region and that the moment was right for Novi Sad to get such representative hotel.

- Novi Sad will get Holiday Inn hotel next year and that fact has a manifold significance. The first of all, the presence of such an important brand will represent an additional impulse for every future foreign investor to come and invest in this region. The more brands are present, the better marketing for the city, the province and the state. The hotel will also employ about 100 new workers. The Provincial Government is willing to provide a financial support for each newly created job. We are also ready for a logistic support, both in the phase of construction of this facility and later, through partnership relations with the representatives of this important international hotel chain - said Pajtić.

The Holiday Inn hotel, of which commencement of construction is expected within next month, will be situated at the corner of Subotica Boulevard and Futog Road. About 11m EUR will be invested in the hotel construction and it will be built and operate in accordance with the standards of IHG.

Expressing gratitude for the trust of the Government of Vojvodina, Peter Vermeer, the Vice President of International Hotels Group (IHG), pointed out that, at the moment, the market of east Europe was developing very quickly and that, when it came to construction of new projects in the hotel industry, it registered significantly larger growth than the rest of the old continent.

The hosts and guests agreed that Novi Sad had all required tourist-economic preconditions for construction of that representative four-star hotel on its territory.

The signing ceremony was also attended by Branislav Bugarski, Manager of VIP Fund, and Thomas Pavlović, Director of Holiday Inn hotel in Belgrade.