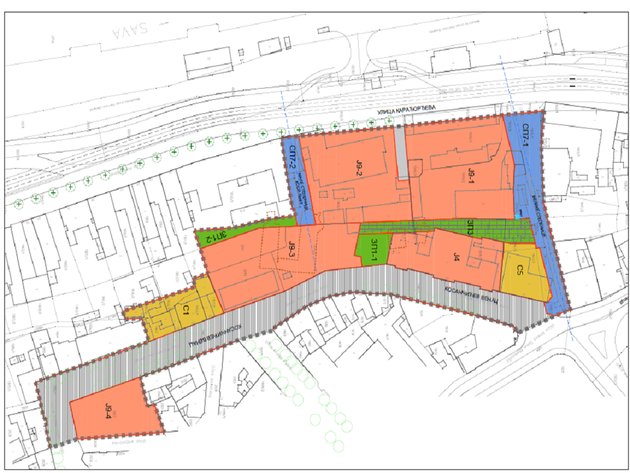 Planned area purposes (Photo: Beograd.rs/ Izmene i dopune plana detaljne regulacije/ Urbanistički zavod Beograda)
The Secretariat for Urban Planning and Construction of the City Administration Belgrade has put the amendments to the Detailed Regulation Plan of the Kosancicev Venac spatial unit up for public review. The plan entails the construction of new cultural institutions, residential facilities and a promenade. The spatial unit is bordered by Karadjordjeva, Velikih Stepenica and Kosancicev Venac streets.

Among other things, the amendments aim to create the conditions for the realization of new pedestrian routes and to connect Karadjordjeva and Kosancicev Venac streets, the construction of the City Gallery, in line with the design from an architectural contest, and the National Library Memorial Center.

The spatial cultural-historical area Kosancicev Venac, a historical urban unit in Belgrade, was pronounced a cultural good in 1971, as the area of the oldest compact Serbian settlement in the Belgrade are and the first developed administrative, cultural, spiritual and economic center of Belgrade in the reinstated Serbian state and a part of modern Belgrade with characteristic ambient and visual qualities.

Due to the natural deleveling between Kosancicev Venac and Karadjordjeva streets (from 18 to 25 meters), the pedestrian routes, historically, took the form of step-streets. The Big Steps (Velike stepenice) route is one of the oldest traces of the former urban matrix.

In that context, this plan entails new steps as a pedestrian link between the ridge and the coastal area of the Sava river and public elevators. The elevator planned next to the Big Steps, connecting the altitudes (in meters) of roughly 86 to 91.45 (the planned promenade), should be designed so as to accommodate at least one person with a bicycle. During further development, the plan says, the establishment of green areas around the Big Steps should be considered.

As said in the plan, the reconstruction of the demolished Djumrukana facility and the construction of a new facility behind it, are planned, all in line with the requirements of the Institute for the Protection of Cultural Monuments.

On the construction parcel planned for the Small Steps Cultural Center, the plan is to build a facility or several facilities with a jagged base.

On the parcel designated for the Kosancicev Venac City Gallery, the plan is to build one facility.

Residential facilities are planned within the zones S1 and S5.

The S5 zone, that is, the microlocation on the corner of Kosancicev Venac Street and the Big Steps (currently Sigmaprojekt) is planned for multi-family residence.

– Through an adequate analysis of urban, spatial and ambient values of the space, it is possible to offer a unique solutions of space development with the construction of a new facility, which will upgrade the current condition and contribute to the visual and the functional characteristics of the space with its aesthetic values and volumetric expansion – the plan says.

The plan also envisages a mandatory urban planning and architectural contest for the part covered by the plan which includes the space of the Big Steps, green areas – pedestrian link – promenade, an integrated road and pedestrian route, Djumrukana and the Small Steps Cultural Center.

The plan is commissioned by MD International and the project developer is the Urban Planning Institute of Belgrade. The public review lasts until July 29, 2020.