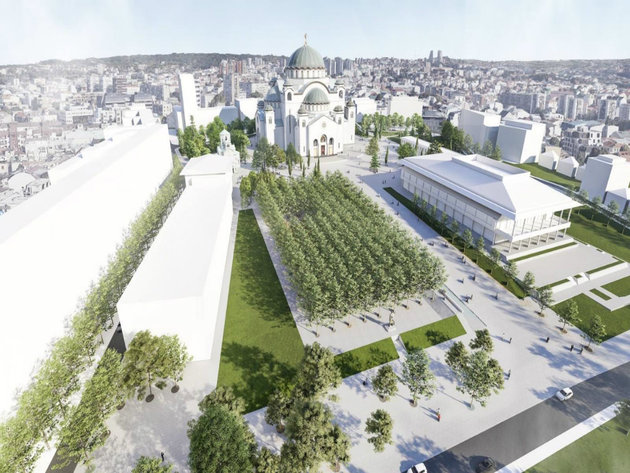 Future look of the park (Photo: Grad Beograd)
The deputy mayor of Belgrade, Goran Vesic, has announced that the park in front of the Church of Saint Sava will be fully reconstructed this year.

– This autumn, 85 years since the beginning of the construction, the Church of Saint Sava will be completed. This job entails the development of the park in front of the church. The authors of this unique solution are academy members Branislav Mitrovic and Dejan Miljkovic. The new park will have much more greenery, almost a hundred new trees, a fountain and new granite blocks. The development of this park will be financed by the Republic of Serbia and the City of Belgrade, and the Serbian Orthodox Church is involved in the process – Vesic said.

He pointed out that the new solution especially highlighted the monument to Karadjordje and that the facility which can be seen in the design, and which partially covers the area where the Parish Home is now and then along Kataniceva Street, was the future location of the building of the Holy Synod of the Serbian Orthodox Church.

– All the previous urban plans of Belgrade envisaged this building, and the project will be prepared by academy member Mitrovic and architect Miljkovic. In a way, with the completion of the church and the construction of the Holy Synod building, the idea of the famous architect Aleksandar Deroko about making Vracar one of the central places of Orthodox faith will be realized – Vesic said.
Companies:
Grad Beograd
Tags:
Goran Vesić
Branislav Mitrović
Dejan Miljković
Karađorđe monument
construction of the Holy Synod building
Aleksandar Deroko
park
development of a park
park in front of the Church of Saint Sava
Share:

Log in to view complete information:
Forgot your password? Click here HERE
For free test use, click HERE
Latest
Most read
Korlace mine near Raska for sale 16.04.2021.
Zlatibor destination booking system has starts operating 16.04.2021.
As of April 19, Serbian citizens can travel to Greece 15.04.2021.
Tender announced for expert supervision over the construction of the Morava Corridor 15.04.2021.
Gas Heating, Investment That Pays Off Quickly – Things Needed to Connect to the Network 08.04.2021.
VMC Building New Luxury Apartment Complex on Zlatibor 04.03.2021.
Erich Cossutta, President of Confindustria – Our door is open to everyone who wants to invest in sustainable projects 11.12.2018.
Plato Bezanija and a new complex in Cerak – Comfort and privacy for the family in the right place 22.09.2020.
Weather
Weather forecast