Price of square meter in Karadjordjeva Street to be EUR 10,000? 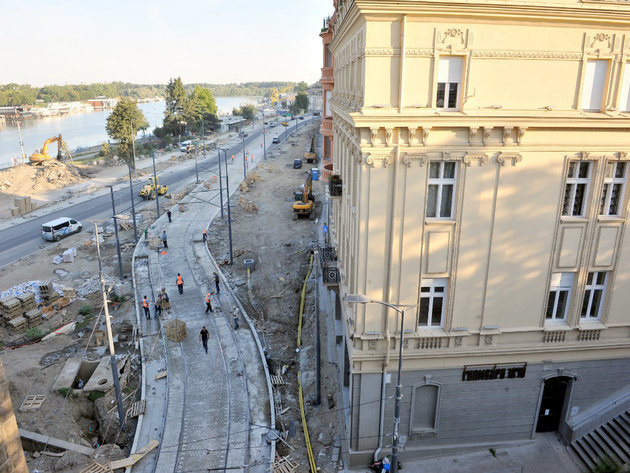 Karadjordjeva Street (Photo: Beograd.rs)
The most expensive property per square meter in Belgrade and the entire Serbia, in the first half of 2019, was sold at the exclusive location of Belgrade Waterfront at EUR 7,918, as shown by the data of the Republic Geodetic Authority.

It is, however, believed that this will soon be topped, but in another location. They unanimously agree that, with the continued construction of the Sava promenade and the renovation of the Sava Square and the turning of the former Main Railway Station into a museum, but also the completion of Vudroa Vilsona Blvd, the city center will expand from Kalemegdan and Kneza Mihaila Street all the way to Ada Ciganlija.

– The look of this part of the city, which used to go only up to the Main Railway Station and Savamala, will change entirely. But it isn't just this part, where large parks are being built and where infrastructure projects are being carried out, that will change. The so-called linear park, which will stretch from Belgrade Waterfront to the Pancevo Bridge and Ada Huja, will also thoroughly change – says Goran Rodic of the Chamber of Construction Industry of Serbia.

He too believes that this elite part of the city will expand to Ada Ciganlija.

– In the so-called old Belgrade, there's a plan to develop the Hippodrome location, but also the former Jugopetrol, which now belongs to Belgrade Waterfront – Rodic said.

One side of Savska Street is completely torn down, the old dilapidated buildings are no longer there, and the famous Belgrade “pyramid”, the last rail car depot of its kind, is no more... It is not yet known what exactly will be built in this part of the city, behind the future Belgrade Tower and the largest shopping center in the capital of Serbia.

The current Belgrade Bus Station is to be demolished too, and the area between the Sava Square and Branko's Bridge is to be developed.

– This will be an elite part of the city. The old buildings in Karadjordjeva Street have already been bought and I believe that the price will reach EUR 10,000. This will be one of the most beautiful residential locations, but it will also be meant for going out, there will be plenty of cafes and restaurants... The old buildings that are bought out will be adapted, but keep their current form – Rodic said.
Companies:
Građevinska industrijska komora Srbije
Republički geodetski zavod Beograd
Tags:
Goran Rodić
Sava Promenade
Sava Square
Main Railway Station
Vudroa Vilsona Blvd
Kalemegdan
Kneza Mihaila Street
Ada Ciganlija
apartments
sale of apartments
price of real estate
price of a square meter
Share: