In anticipations of having the great capital crisis finally over, various market and state economy surveys are being made throughout the world in order to get leastwise valiant indications of the beginning of its end. When Europe is concerned, trends at real estate market are monitored exceptionally carefully since this sector, along with the automobile industry, has been hit in the greatest extent and most severely.

Therefore, it is no wonder that frequent specialized reports have been trying, via comparisons and analyses of numerous parameters over a previous period, to point out to the situation competently and highlight the expectations for the forthcoming period.

The article below is, so to say, a consequence of two facts. At the beginning of the summer, King Sturge published their European property market survey stating projections of expectations for real estate development until the end of 2009. Another fact refers to winning the prestigious award Consultant Agent of the Year in South-Eastern Europe as a recognition for their professional work presented on 23 April 2009 in Bucharest, in organization of Europaproprerty South-Eastern Europe.

This text is the comment on the study with a selection of data for office space and specialized industry space markets in several major cities of Europe and Serbia i.e. Belgrade.

In 2009, the Eurozone has been facing a severe GDP drop amounting to 4.7% on an average and representing a post-war record. Almost all economies in Europe are currently facing recession indicators. The most unpleasant predictions refer to the German economy which has experienced a decline indicator of 6.3%, followed by Italy with -5.2% and France with -3.1%. Taking into account stable and continual growth indicators over the recent years, a slowdown of further decline is expected until the end of this year, however still not in the extent sufficient to prevent the conclusive recession indicators for this year.

Projections for the Central and Eastern Europe created over the recent few months still suggest the conclusion that their prospects till the end of the year will be recessional. With an average 5-6% annual growth typical of the last 5 years, these economies face a sharp recession turnaround this year. Currently Russia and Hungary are still experiencing poor predictions, but the overall East European output is expected to equal this year’s final decline at the rate of -3%, similar to that expected in the West European countries.

Concerning the office space in Europe, that type of real estate market has faced the weakest demand ever coinciding with the rental downward trajectory over the second quarter of the year. The rents in London continue to slide, although the decline rate has slowed down lately. In comparison to Paris and Amsterdam with the fall of -10% and -12% respectively, London holds out very well. Brussels, Milan and Copenhagen fared somewhat better compared with Paris and Amsterdam, registering changeable indicators with rents expected to stabilise for the rest of this year.

Further decline of rents in the CEE region continues to suffer huge pressure due to subdued demand in the first half of the year. Warsaw has been particularly badly affected with rents falling by as much as 27% since mid 2008. Moscow is also seeing rents adjustment on a year-on-year level of as much as -42%.

Rents in two cities of the CEE region, Zagreb and Sofia, extremely resist the declining trend, if one can say so. Zagreb has held 204 Euros/m2 on the year-on-year level whilst Sofia is the only one to register any office space rents growth. Some bigger rental corrections on the office space market can occur till the end of the year, but the downward trend is still expected even in the course of the following year 2010, and possibly beyond. As Britain was the first into the downturn, it is likely to see the first positive signals, too.

Basically, in regard of investments the European office space market has continued to see corrections in pricing combined with low levels of transactions. However, a shy sign of improvement can be seen here. Positive yield indicator for the leading office premises at West End and in the City has slightly increased being the only one ever since the Q1 period. Yields in Helsinki have also shown recovery for the first time since the end of last year. The European spread of yields ranges from the lowest at 5 per cent points in Copenhagen stable over the last quarter and the highest currently in Moscow with yields shifting out to 14 per cent points.

Despite some signs of modest growth in activities in the European industrial markets, there continues to be a lower occupier demand in comparison to the last year. This has translated into either stable or falling prime rents in the second quarter 2009.

Rental prospects over the next six months or longer are generally slightly better for prime industrial rents for offices, with most cities expecting little or no rental change over the forthcoming period, rather than falls.

Investments in the industrial sector appear to have picked up, although they still remain at a very low level. London is the only city where the prime industry yields have decreased. In Dublin, Madrid, Helsinki and Oslo the yields were unchanged and are expected to hold, except in Helsinki which is expected to see an increase in H2 2009. 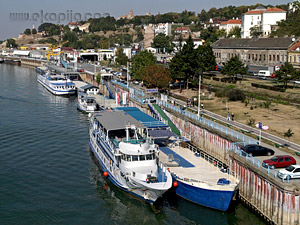 Concerning Serbia, Belgrade is still the key indicator of the real estate development. Class A office space is still under pressure of the declining rental trend particularly having in mind that a number of new Class A office facilities have been completed over the recent years. Vacancy space rate is currently above 18% and no recovery of this indicator is expected for another 6 months. In any case, what is interesting at the moment is the difference between Class A and B office rental price in comparison to Class C rents, showing vacancy rate increase for the office space of poorer quality and equipment.

As far as the sector of industry and logistics centers is concerned, rental rates are still strong with very slight downward adjustments, but with an increased pressure in that direction. Anyhow, demand of prospective tenants, particularly of the international ones, has been reduced.

Investment sector (in this domain) has not been very active during the last 6 months. Price levels have not dropped significantly. Fewer sellers are forced to sell finished projects and currently there is a subdued need of the second owners to sell their industrial projects in the early phase of project cycles.

International property consultants King Sturge was awarded the title of the Agency of the Year for that category at the fourth annual EuropaProperty South-Eastern Europe Real Estate Awards for 2009 held at the SAS Radisson Hotel in Bucharest at the end of April. This award supports the achievements of the leading real estate professionals in the region of South-Eastern Europe. At the prestigious awards ceremony on 23 April 2009, that attracted 300 guests, it was annouced that King Sturge beat stiff competition to claim the top prize ’’Agency of the Year in South East Europe’’ for the forthcoming year.

The nominees were judged and assessed according to their overall market contribution, quality of rendered services, market innovations, commercial success, leadership role and market penetration, what excelled ’’King Sturge’’ in particular in front of the competition.

’’We are delighted that especially in difficult times for the economy and the business environment, our professional work is acknowledged and respected among our clients and our peers’’, Jens Moller Madsen, Managing Director of King Sturge Croatia and Serbia welcomed the award.

Otherwise, King Sturge has been present in South Eastern Europe for over 10 years creating long term relationships with numerous international and domestic clients. The company operates in the region via the offices in Budapest (Hungary), Bucharest (Romania), Zagreb and Split (Croatia), Belgrade (Serbia) and Sofia (Bulgaria).