What does the plan for former IMT factory area in Belgrade entail? – Twelve-story buildings, 1-ha park... 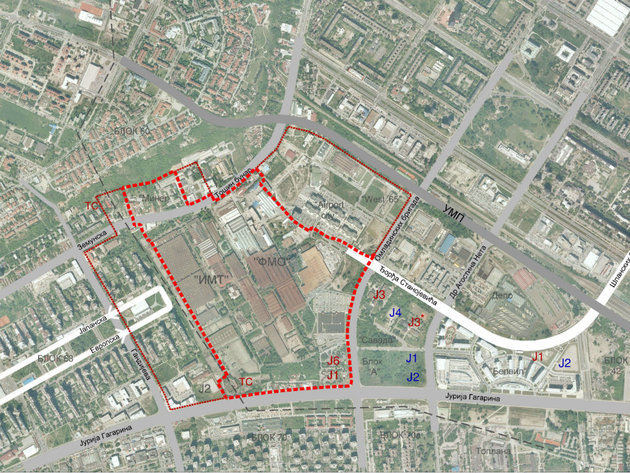 (Photo: Grad Beograd / Urbanistički zavod Beograda)
The Belgrade Land Development has commissioned the Detailed Regulation Plan of the area between Jurija Gagarina and Zemunska streets in New Belgrade, on the large area where the company Industrija masina i traktora (IMT) used to be.

The aim of the preparation of the DRP is to define the purpose of the areas and the rules of development and construction in the location of the former IMT and FOM factories, in line with the city’s efforts to move working and industrial zones from the central areas and repurpose them as modern urban areas.

The plan is to transform these zones into zones of mixed (residential, with a substantial share of accompanying commercial, service and social activities) and business purposes.

– An important goal of the first phase of the plan is to define the main recommendations and guidelines for the urban organization, architectural development and contextual fitting of the only remaining zone for substantial organized construction in the territory of the developed area of New Belgrade – the plan reads.

It is added that another important goal is to define the conditions which will enable this zone to develop its business and commercial character, thereby securing a large number of jobs, strategically located in the center of New Belgrade.

Also, a part of the area covered consists of special areas – transformation zones.

– Due to the importance of this location in the context of the City, the development potential and the complex development conditions, the complex of the IMT factory is located within the areas for which the preparation of a public urban planning-architectural contest for the construction of residential-business features with the accompanying public services and functions is mandatory – the documentation reads.

The existing purpose of the zone pertains to two former factory complexes, IMT and Minel, as well as parts of the former FOM complex. The complex of the IMT factory is the largest one, with the plan covering an area of 32.6 ha. The Minel factory complex is located in Zemunska Street and has a total area of around 1.6 ha.

Around 30 facilities were built within these two complexes: production facilities, warehouses, halls, administrative and auxiliary facilities and similar structures, of the total gross building area of around 150,000 m2.

The part of the former FOM factory complex which is currently used for business activities or featuring old, out-of-function factory buildings, amounts to around 14 ha. The preparation of urban projects, based on the direct execution of the General Regulation Plan, has been initiated on a total of 4.5 ha (32%) of this area.

– Within these areas, a total of around 50,000 m2 of production and auxiliary facilities were built. The buildings are mostly of the single-floor type, but there are some with three floors. Within the existing IMT and Minel complexes, there are developed green areas with valuable examples of planned vegetation, of a good condition and habitus. The existing residential zones are zones dominated by individual residential houses on a parcel which also features commercial and service facilities – the study reads.

The total zone area is around 3.5 hectares and features around 60 non-planned buildings, mostly of poor site class, of the total gross building area of around 20,000 m2. In the zone along Zemunska Street, the facilities built are pre-war residential houses.

The number of floors goes up to three, whereas only two facilities in Zemunska Street, built within the former IMT factory complex, has a larger number of floors: a residential facility of five floors and a commercial facility/hotel of seven floors.

Parts of the former FOM factory complex have been privatized and transformed into, among other things, two hypermarkets and a business complex. The hypermarket complex, of the total area of around 11.1 ha, two buildings have been raised of the total area of around 32,000 m2, with the accompanying parking areas, whereas a part of the complex remains undeveloped. The business complex of around 0.5 ha, located in the central part of the former factory complex, features three facilities with five to seven floors and the gross building area of around 15,000 m2. 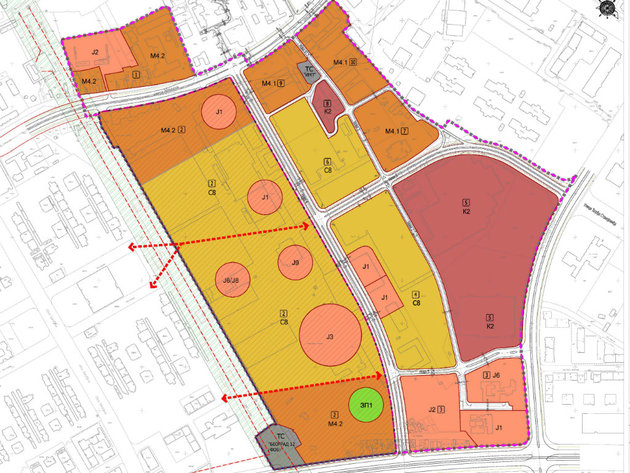 What should be built?

When it comes to residential facilities, seven-floor buildings are planned, as well as buildings of up to 13 floors at the most in special cases. The mixed city center entails a combination of commercial features with residential one, with nine floors and up to 13 floors in special cases. The plan also includes facilities for commercial features exclusively, that is, for public services and a garage, of up to five floors.

The areas for public service buildings and complexes are planned for the needs of the planned number of residents (around 18,400). They are also to feature four pre-school facilities for 270 children per facility, as well as two elementary school facilities of the total capacity of around 1,680 students. A high school facility for 960 students is also planned.

The plan also includes a social and health protection facility with three floors, for a minimum of 100 users, as well a three-floor cultural facility, that is, the center of the future social community.

– In the location of the formed intersection with Zemunska Street, the plan is to have another primary traffic route on the area Nova 4 (IMT traffic route), connecting Jurija Gagarina and Zemunska streets. Also, as the result of a wider analysis, the possibility of connecting Djordja Stanojevica Street with one-way Evropska and Japanska traffic routes, going through the central axis of blocks 61-64, is considered – the plan reads.

Waterworks and sewerage need to be reconstructed or built where required.

KCS Galovica needs to be built on a location in Block 44, as well as a new rain collector. The condition for connecting new facilities to the used water disposal system is the construction of KCS Usce.

The construction of a steel distribution gas pipeline along Zemunska Street is planned as well.

A green area for recreation or a park of at least one hectare is planned for the needs of the residents of the mixed city center zone, especially in the section along Jurija Gagarina Street where the construction of large-capacity residential/business facilities has been intensive in the past decades, eschewing green areas.