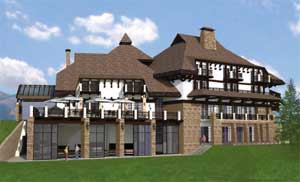 A company for production of organic food and cosmetic articles “Hemel”, based in Jagodina, has started today (August, 25th, 2009) construction of exclusive hotel-apartment complex Center for healthy living “Rose of the winds”, in Zlatibor, in which it will invest 12 millions euros.

The foundation stone was placed by Mr. Oliver Dulic, Minister for living environment and environmental planning, who stated that "Hemel"s project contained everything this Ministry was working for, which was legal construction and tourism with maintainable development along with natural resources preservation.

As it was announced, the plan is that the complex should be finished by July, 1st, 2010.

The center will have a five stars hotel, several pools, fitness center, gym, golf field, and it will spread on over 4 hectares.

"Hemel" company owner, Nenad Miljkovic said that only organic food without pesticides and herbicides would be served at the complex, and that it would be the first vegetarian 5 stars hotel not only in Serbia but in the Europe.

Investors said that tourists from Europe, especially from Scandinavian countries were interested in the services of this complex.

"Hemel" company, based in Jagodina, exists for 18 years and with its cosmetic products and other articles has been active on more than 80 markets in the world, having annual export of over 10 million euros.