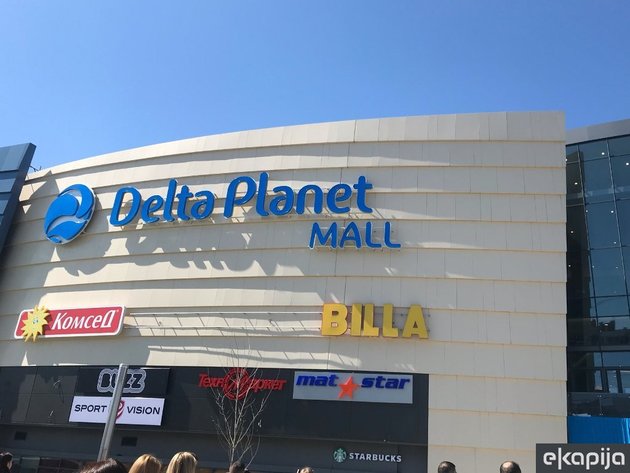 Delta Planet in Varna
The Delta Planet shopping mall officially opened today as the second biggest center of this type in Bulgaria. The opening was attended by Stoyan Passev, the Governor of the Varna Province, Ivan Portnih, the mayor of Varna, Zorana Burlic, the CEO of Delta Real Estate, and Peter Dudolenski, the CEO of AP Investments.

– Delta is not arriving to Bulgaria for the first time. Over ten years ago, it invested in the Piccadilly retail chain. With the opening of the Delta Planet shopping mall, it has been confirmed to us that Bulgaria is open to investments and that companies from Serbia are welcome to your country – Burlic said.

A rich program was organized for the visitors. An attractive flash mob with 100 participants and performances by various bands and famous YouTubers were only some of the attractions at the opening.

This investment of Delta Real Estate and its partner AP Investment is worth EUR 120 million, and the shopping mall takes up 110,000 m2, of which 40,000 m2 are available for rent. The facility is based on the new “retailtainment” concept, which combines shopping and entertainment. The shopping mall therefore features large interactive entertainment zones of as much as 4,000 m2.

Brands such as Pinko, Desigual, Ralph Lauren, Marco Polo, Cropp, Sinsay, Mango, Sport Depot, Sport Vision, Billa, Cinema City and many others are coming to Varna for the first time. International brands Reserved and Mohito will present their latest concept of larger stores at this shopping mall.

The Delta Planet shopping mall is located at 185 Slivnica Blvd, has four levels, two of which are on the ground level due to the natural inclination of the terrain. It also has three additional underground parking levels with 1,300 spaces.

Only a week ago, Delta Holding opened Delta Planet in Banjaluka, the first shopping mall in this town.