(AG Real Estate) Are we going to get strategy for development of industrial parks? Serbia - logistic center of the Balkans?

Due to its geographical position, generally more qualified and less expensive labour force than in the surrounding countries, though with unfinished traffic motorways of all categories, Serbia recommended itself as a logistic centre of the Balkans. Envisaging the need of faster industrial development, formation of industrial zones has been initiated in most municipalities. Within these zones, in addition to warehouses and small scale industrial plants, construction and/or industrial parks development is being launched.

We can say that at the moment (February 2009) a clear national strategy for industrial parks development does not exist yet, which is necessary if for no other reason than for defining the minimal conditions necessary for an industrial park development to be launched on a potential location. We inherited the opinion that we are happy God’s gift to everything. Presently, at the height of the crisis, when everything is „three times measured, once cut“, in order to start a project financing, the above stated is not a sound recommendation.

At the beginning of December 2008 started a preparation of the national strategy for industrial parks development in Serbia. Some time ago, in the Ministry of economy and regional development, in the department for regional development, on the grounds of cooperation and with assistance of SIPP, SIEPA, FIAS and IFC, was launched a process in order to make a high-quality draft which will legally frame and define this topic. Thus it will be much easier to identify any activities in the sphere of the national strategy adoption which will enable better conditions for high- quality attraction of such investments.

On the other hand, every municipality in Serbia, exploiting any available potentials, slightly even imitating one another, have been trying to attract prospective investors to realize their investments just in “their yard“. Accordingly, our municipal authorities hope to increase the number of new jobs and thus reduce social pressure on the usually poor municipal budgets. However, the reality is quite different!

When an investor knocks on the door of a local autonomy after a very short time numerous problems emerge, with due respect to the exceptions. It is soon realized that it is not sufficient enough to reach some important decisions and declare a building plot out of the agricultural land but that the whole process must be preceded by a long-lasting, difficult and basically strategic work. For these reasons we shall expose hereinafter the most interesting conclusions from the one-day gathering which took place on 9 December in the Sava Centre.

Preparation of the strategic framework

Envisaging undisputable advantages and capacities, in order to shape the industrial parks development into a written and attractive strategy adopted on the state level, the first step is adoption of the action development plan of this story, particularly defining one strategic framework and its application. In that way would be traced development frameworks equally adequate for all regions and municipalities in Serbia, taking into consideration the currently valid fact of, still, uneven development.

Therefore it is necessary to establich the order of the steps by which realization of the industrial parks development in Serbia would be accelerated. Primarily it is thought of improvement of the information on supply and demand for disposable „industrial“ plot. Furthermore, legal and administrative obstacles preventing brownfield use and military locations in particular have to be removed. The latter are especially valuable since, so far, they have been excluded from prospective investment contemplations designated as „higher interests defined in our defence strategy“. The potentials lying in the military real estate is enormous especially in regard of activating thereof and thus solving certain problems in the Serbian Army.

It is also necessary to adjust the national and municipal infrastructural planning in order to fulfill the conditions for a new greenfield construction, particularly having in mind that some zones have made headway in infrastructural preparations for prospective projects; in that respect, by „movement“ of interests into a more prepared zone the beginning of the same project realization may be accelerated. As we are at the height of the financial crisis which is shaking the whole world, allocation of reduced available funds into domestic industrial parks which meet the criteria on the grounds of the existing and correctly elaborated feasibility studies the realization process may be accelerated in a top-quality manner. In addition there are obstacles which have to be removed and which are now making the investors’ and clients’ arrival into industrial parks difficult. In addition to all above stated, the efforts aimed at promotion of the industrial parks development concept on the national and local levels as well as at resources improvement of the state and private promoters of the existing industrial parks have to be particularly coordianted.

By implementation of all above stated activities in a coordinated and concentrated action on the state leve, all key elements of the industrial parks development strategy would be defined. Thus, in the following steps, through adoption of legal and institutional framework for industrial parks development, by unambiguous defining of the criteria for permits issuance and through implementation of trainings of the administration of local autonomies throughout Serbia, the dynamics and responsibility for realization of this concept might be finally defined.

In the process of sustained cooperation of all interested parties (Ministry of economy and regional development, SIEPA, VIP, Ministry of finance, private sector) through revision of the existing Bill draft and forming of the working group, the legal framework would be fully defined by final adoption of the Law on industrial parks. And until its final adoption all interested parties have to be active and continue with meetings until the Law is passed. The existing regulations and rules have to facilitate the implementation of this Law in practice. The key of success lies in the fact that all interested parties from the public sector should have the same approach and accept the agreed standards by signing the Cooperation agreement. The agreement is the means by which the Body for industrial parks (which is only to come into effect by the Law announcement and most probably that will be a government’s Agency) will be able to secure support of all important active participants in order to achieve the mutual goal. Also, all instructions and procedures which are yet to be adopted have to be published for transparency.

In finding appropriate institutional solutions which will enforce the Law, the key issue is appointment of competent persons. As soon the Agency for industrial parks is founded, a few capable, qualified and responsible people have to be employed (which means that selection and choice of the starting team has already been made) who will set up the work of the entire organization. In order to form such a body, adoption of an adequate budget is necessary. Immediately afterwards, the competent Agency shall have to promptly employ, either on a permanent basis or as consultants in case of need, a number of planners, lawyers and financial experts

This Agency shall be a direct collaborator in the development of each individual park. The essential thing is to establish firm and professional cooperation with the local autonomy and their services, particularly in the processes of the required permits issuance. In that respect, it will also be necessary to raise the level of the local autonomy performance in order to become more efficient than it has been so far. Furthermore, a competitive environment has to be established since the more efficient autonomies will attract the investors faster. The basic criteria have to be economic profit, then ecological, social and economic viability of every individual park. A realistic view on the market and proper consideration and risk identification and possible negative performances thereof will enable closer cooperation of local and national authorities, since in that case they will be more efficient and transparent.

By adoption of the framework for industrial parks development will be primarily solved legal issues relating to land transfer, ownership and registration, which are presently incomplete. This will help the investors to identify the potentials to the banks once they start collecting the funds needed for development of these parks.

In addition, local autonomies have to be aware of their present potentials. This includes first of all the quality of the planned zones, availability of required and qualified labour force, administrative capacities of the municipalities, simplification of procedures and reduction of local expenditures and fees for land development Also, „positive and convenient“ tax policy shall not be negligible.

Training for municipalities and liability

Within local autonomies either forming of special sections or, within the existing ones, assigning the mandates to a number of officials must be initiated; they will be in charge of industrial parks developments, according to their official duty in the local administration as well.

Training and programmes for study trips are the key of the guiding idea for this concept development. Foreign experiences, the positive and particularly the negative ones, can extremely accelerate this process and, on the grounds of negative experiences, lessen the risks or prevent a negative development scenario. On the other hand the Agency will most probably establish the programme of technical aid as a possiblity of faster placement and adoption of the key know-how. Rendering a consulting assistance in concrete situations and assistance in selection and employment of adequate personnel on the local level for the industrial parks development will crucially prompt this process. 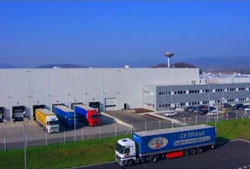 The model according to which this concept is assumed to be developed will take a two years. In the first year (is it 2009?) the Law shall be passed and preferential locations shall be chosen where all necessary activities will be carried out: from elaboration of feasibility studies, town planning, choosing the plots inside the locations, evaluation of the parks development influence on the environment to applying for and acquiring the status of industrial parks.

Therefore, under assumption that the park is institutionally defined as a legal entity, an unscrupulous marketing will follow and at the beginning of the second year it may be expected that construction of the very buildings in the park will almost be finished. In the course of the second year, re-training of the required labour force will be performed in case of its insufficiency in the concrete local autonomy.

Having in mind the current financial situation, time will prove in what extent this concept is realistic, especially within the stated time limits. Anyway, adoption of this concept into the legal framework shall accelerate realization of their former plans. Now it will be shown which local administration has had a high quality vision of the „near future“ and which one, under the influence of problems and social pressures, making quick decisions without proper preparations, has adopted an unrealistic concept!