Future pearl of Serbia and the Danube, Marina in Apatin, in operation prior to summer – luxury available to everybody 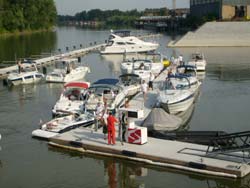 International marina Apatin, of which construction commenced in 2006, will be put in operation prior to the beginning of summer. According to the CEO of the Tourism Organization of Apatin, Mile Đukić, the future pearl of Apatin and Gornje Podunavlje, in the construction of which 3.5m EUR has been invested, will have total of 400 cleats – 280 for small boats up to six meters long and 120 for yachts up to 15 meters long. As Đukić explains, the marina complex will include a gas station, in which "Naftagas" invested 50m RSD, and it will be used for refueling of yachts and other vessels, as well as automobiles, “on both water and ground”.

- That will be the only gas station of the kind in Serbia, and there are only few of them in Europe –Đukić points out and explains that this gas station on Marina’s pontoon will enable supply of vessels with fuel. – By the way, all pontoons are made of light concrete, with water and electricity connections, and Novi Sad-based company “Albatros Marine” have designed them according to “Swedish model”.

The Marina complex, as Đukić explains, will also include dry dock at 2,500 square meters for keeping of yachts and boats during winter, as well as a ramp for their lowering.

- The Marina complex, at total surface of 1.4 ha, will include 145 cabins and 8 suites for the needs of navigation experts, a restaurant, ship’s chandler, a food store, parking lot for 170 vehicles, nautical club, tourist agency, info center, administrative building, as well as 10 public bathrooms for the needs of navigation experts – says Đukić and explains that Marina will be ready in about 20 working days.

According to the words of Đukića, rough construction works on the Marina complex have already been finished, while vocational works in the administrative building and in bathrooms are close to end, as well as the works on installation of video-surveillance system.

By the way, the Marina project was elaborated by "Hidroinvest", while the earth works were carried out by company "Zapadna Bačka" from Sombor. According to the words of Đukić, the most beautiful job – 300-meter quay and a ramp for lowering vessels – was done by Sombor-based company "Dunav i Tisa".

Sports center on water, suites and cabins were built by "Novogradnja Bezdan".

As Đukić points out, construction of the Marina was mainly financed from the National Investment Plan. Refurbishment of the embankment cost the most (75m RSD), and it was financed by NIP, "Vode Vojvodine" and Town Hall of Apatin.