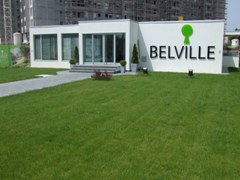 The Manager of construction of University village "Belville", Aleksandar Živanović, handed over the keys to the representative of company "Univerziade 2009", Ranko Tepavčević, yesterday (March 18, 2009). In that way, the first five facilities have been officially allotted to that company after 656 days of construction and two months before the deadline.

The complex includes total of 14 residential buildings and two business buildings, and the other buildings will be handed over successively, once they are completed, in order for the equipping and furnishing to start on time.

- The complex has 1,858 apartments, 393 of which are still without owners, and these are mainly two-room, three-room and four-room apartments whose one square meter costs 1,950 EUR – says Slobodan Mihailović, the Executive Director of company "Block 67".

According to his words, the prices were formed in October and they will not be changed, while 98 outlets still wait for new owners.

Ranko Tepavčević, the representative of company "Univerziade 2009", pointed out that the village, functional center and control building would be equipped and furnished within the following two months, and he announced that the University village would be visited by the chiefs of the delegations of the countries participants.

The investors are "Delta Real Estate" and "Hypo Alpe-Adria Bank". The construction has been managed by company "Delta invest", while company “MACE” was in charge of expert supervision.

Over 20 companies have been working on the facilities. Once the sports teams leave the complex, all the facilities will be additionally organized and handed over to the buyers. There is a parcel within the complex intended for construction of a school, kindergarten and care center for the old-aged.