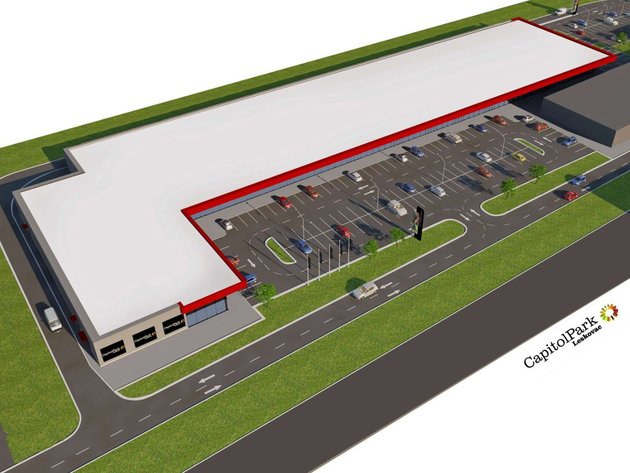 Future look of Capitol Park Leskovac
After the completed projects in Sabac, Sombor and Belgrade, Poseidon Group continues to invest in the Serbian retail market. As said in a press release, the British investor is now bringing its Capitol Park brand to Leskovac.

As announced today, the works will begin in the summer, and the opening of the retail park is scheduled for the autumn of 2018.

– Capitol Park Leskovac will be the fourth retail park of Poseidon Group, in which around EUR 10 million will be invested and which will provide consumers with a mix of 16 outlets of renowned local and international brands. Furthermore, the arrival of this project to Leskovac will contribute to the city's economy with around 500 new jobs in the construction phase and 200 after the opening – said James Gunn, the director of Poseidon Group in Serbia.

The decision to invest in Leskovac is a result of, among other things, its favorable central location in the Jablanica District, as well as of the positive trends of economic development in the town, as confirmed by the certificate that Leskovac got from NALED as a town with a favorable business environment.

The land of 16,500 m2 where the park is to be built is located in the wider center of the town, on the corner of 28. marta and Stahinjica Bana streets. The advantages of this location are the proximity to the town's center, as well as to the E-75 highway. Capitol Park Leskovac will be the first retail park in Leskovac and a shopping and entertainment center for the entire family, with a total area of 6,500 m2, says the press release.
Companies:
Poseidon Serbia Beograd
Grad Leskovac
Tags:
Poseidon Group
Capitol Park
Capitol Park Leskovac
Town of Leskovac
James Gunn
retail park in Leskovac
Share: