Stattwerk to 'make green' the tax Administration office in Zeleni Venac and EPS buildings too - The future complex will have eco-hub, hotel and parking garage with 500 parking spots 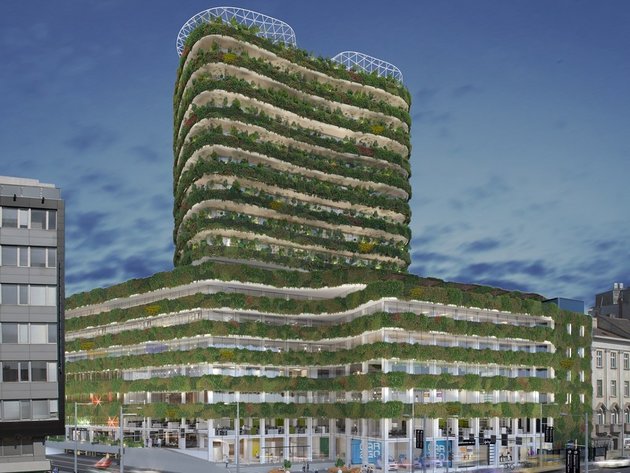 We finally have the first look of the future building and beside Beobank the green oasis might also include the buildings of Elektroprivreda Srbije located in Carica Milica Street and Tax Administration Office in Zeleni Venac. Namely, the German firm is trying to acquire these two objects as well so that it could turn all three buildings into a unique green oasis. By the way, those buildings were part of the Energoproject design from the Sixties and made a unified whole built on uniform foundation.

- Stattwerk has expressed its desire to buy these buildings and got the go-ahead from EPS, Ministry of Finance and other government authorities, it was stated during the presentation of the conceptual design. There wasn`t any definite information when the company might take over the buildings or how much the acquisition would cost.

The conceptual design present in Belgrade today does include all three buildings and the estimated value of the project is about EUR 30 million.

During the next month the company will seek to obtain the location requirements for Beobank building, the only one they own so far, the company has said for our portal. Developing the project is to follow after which they are going to need three months for project optimization. After the work on the building begins the construction is estimated to last between 12 and 15 months.

The permits and documentation for other two buildings would be completed after their acquisition. In Stattwerk they remain optimistic that the transaction will be completed.

Conceptual design of the future green oasis in capital`s centre, developed by a team of Stattwerk architects in collaboration with other colleagues is characterized by an organic form which is reminiscent of a live, pulsating mountain in the heart of Belgrade. It concerns a multifunctional object which will among other things contain an eco-hub - a center for learning, training and work, the first public lookout and a separate space for environmentally oriented transport. 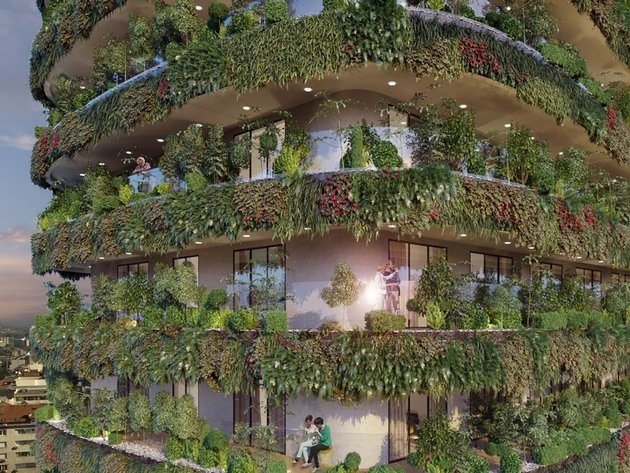 - The inspiration for the conceptual design came from the analysis of the location itself, since Zeleni Venac is on of the busiest and therefore the most polluted part of the city.
Our team`s objective is to contribute to the improvement of life quality in the central city zone by decreasing noise pollution as well as making the time the vehicles linger in the streets shorter. Our garage will certainly be instrumental to that, Stattwerk states.

As they explain, their team`s creative concept sends a message that the nature is larger than architecture. It constantly changes, every season brings about a new look and the building will accordingly go through similar changes. It could also change colours depending on the life of plants forming its façade.

The first skyscraper with green facades in Serbia will be over 30,000 m2 in size of which 2,700 m2 will belong to green facades. Aside from vertical façade panels, the exterior of the building will feature additional plant life such as potted plants while the roof covering the total are of 2,600 m2 will also be green.

The space for `green` ideas, a hotel, eco-hub, restaurant, garage…

As it was pointed out, the building will be multifunctional. Eco-hub - a center for education and practical training of pupils, students and young scientist will take up four storeys and will consist of conference hall and classrooms, eco-stores and eco fair and the workspace intended for start-ups and individuals developing `green` ideas.

Stattwerk building will also contain business space designed specifically for environmentally oriented companies and organizations and an apart-hotel. It is a combination of hotel stay and individual housing. The explanation provided states that this hotel will have 70 housing units, ranging in size between 30 and 60 m2. 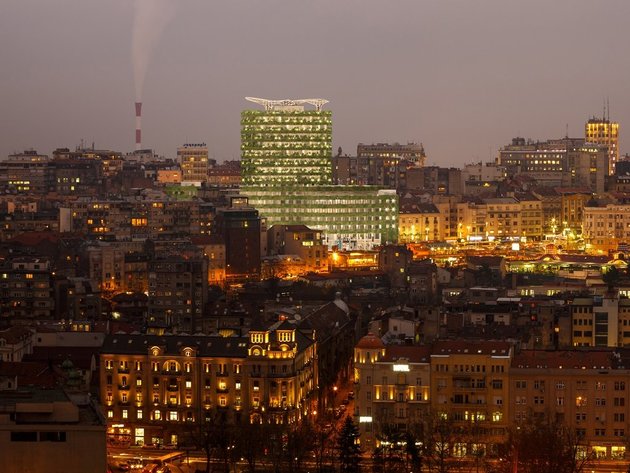 The very form of the building was designed with the purpose of energy optimization. The brackets in the conceptual design create a microclimate barrier walls between the interior and the exterior and at the same time control the solar flow both in winter and in summer. The project foresees the use of solar cells, wind generators, geothermal energy, and the exchange of heat in sewer systems and piezoelectric floors.

The building was imagined as a one of a kind case study of well known renewable energy resources and a test for new technologies and getting innovation in this area closer to the local academic community and general public.

The money for the project has already been secured and it has been stated that after construction is finished Stattwerk will retain the ownership of all segments.

An app for smart devices which shows the future look of the building and will be available from June has been developed in collaboration with the students of Faculty of Media and Communications at Singidunum University. Let us remind that the students of The Faculty of Architecture were involved in the conceptual design development. During 2017 Stattwerk held the survey contests for the conceptual design of the future eco-center for local architects and their undergraduate future colleagues. 65 propositions were submitted and the international jury consisting of university professors, architects and sustainable energy sources experts had a hard task selecting choosing the best projects.