Realization of first phase of 12m EUR worth of project "Duboko", the biggest regional dump in Serbia - soon construction of waste selection line and transfer stations

The first phase of development of dump "Duboko", worth about 1.3m EUR (101m RSD), is close to end. As CEO Ivan Đokić points out, the second phase, which includes construction of waste selection line, should start in two months in order to be finished prior to September 2009. Construction of this line, which will be financed from 4m EUR worth of donation of European Agency for Reconstruction, has been entrusted to Slovenian consortium made of "Drava Ptuj" and "Atrik" from Ljubljana.

Dump "Duboko" is the regional project and its elaboration and implementation is carried out by 2 cities (Čačak and Užice) and 7 municipalities (Kosjerić, Lučani, Ivanjica, Arilje, Požega, Bajina Bašta and Čajetina). According to the contract that was signed in 2005, all cities and municipalities are obliged to close their existing dumps within 90 days from the day the Regional dump is opened and to send all their waste through transfer stations to "Duboko", which becomes its exclusive owners.

- About 0.5 ha of land is needed for development of stations. At the moment, only two municipalities know where to place them. They were suggested that the existing dumps should be used for development of these stations, but we are now intensively thinking about developing one transfer station in Požega for municipalities of Lučani and Arilje for both economic and some other reasons. However, we will try to find optimal solutions - says Đokić.

According to the words of the Director of the future largest regional dump in Serbia, its construction goes as planned, so that it can be expected that "Duboko" will receive and process its first waste already at the end of year 2009.

- The first phase, which includes construction of access road and infrastructure, is close to end. The contractor for these works is "Putevi Užice". Slovenian consortium should start construction of the waste selection line in mid-December. The tender for selection of contractor for development of the dump's "body", which should be carried out in the third phase, has been announced recently. Documentation on the tender, which will be open prior to November 10, was bought by 12 companies from the country and abroad – says Director Đokić. 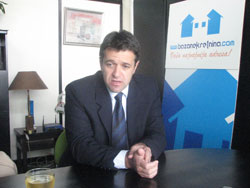 Financial structure for development of dump "Duboko" is completed. The project worth 12.1m EUR will be financed from four "sources" – European Agency for Reconstruction donated 4m EUR for construction of the waste selection line, the Government of Serbia provided 1.2m EUR (95m RSD) through the Environment Protection Fund, about 350,000 EUR (29m RSD) is obtained from NIP, while the European Bank for Reconstruction and Development approved the loan of 5m EUR. According to the words of Đokić, the rest of the funds will be provided by the municipalities.

- The largest individual investment is, most certainly, construction of the waste selection line for which we got the donation. But, significant share of funds will be spent on development of the dump's "body" and "transfer stations". Transfer stations are the locations in municipalities and cities, which are included in this regional project, where local public utility companies will be disposing the waste they collect during the day. These locations will belong to dump "Duboko". The waste in "transfer stations" will be compressed, stored and transported to the dump in special trucks – Djokić explains.

The life of dump "Duboko" is estimated to 15 years, but the idea is that its successive modernization prolongs the life significantly.

- This is only a basic model that reduces the influence on environment to a minimum. However, it should be pointed out that the technology that will be used is not of the latest generation. Therefore, we do not plan to stay at this level. The technology that is used in other countries enables reduction of volume, that is, it enables treatment of biodegradable waste in the way that contributes to extension of the dump's life. We will try to prolong the life of "Duboko" by investing in its modernization. Maintenance of the dump and later investments will be financed from the budget of the regional dump since every municipality will be paying to dump "Duboko" per ton of waste. Part of the incomes will be provided from the recycling - says Director of the Regional dump "Duboko".