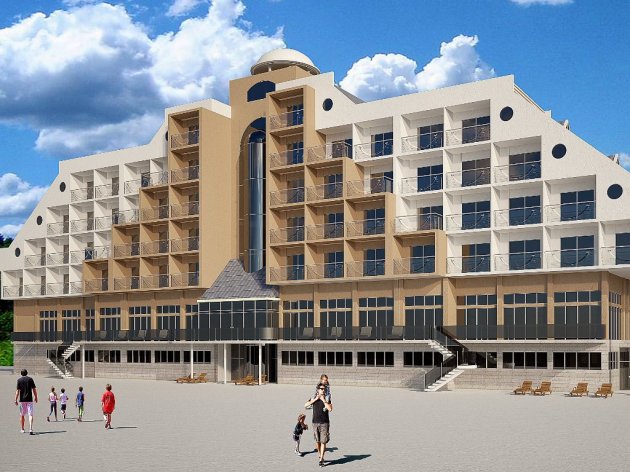 Future look of hotel in Lukovska Banja
Lukovska Banja, located on the eastern slopes of Kopaonik, at an altitude of 681 meters, is the highest spa in Serbia. According to the Ministry of Tourism, the biggest demand for tourist vouchers is related to this spa.

Due to the great interest of both local and foreign tourists, the construction of a new four-star hotel will begin in Lukovska Banja in the spring of 2018. The Planinka j.s.c. plans to build the third tourist facility in the spa, which is to take up around 7,000 square meters and have 230 beds.

– The construction of a new hotel in Lukovska Banja should have started this autumn, but it was postponed until next spring due to unresolved property relations – Radovan Raicevic, Executive Director of Planinka, says in his interview for eKapija.

Our interviewee says that the current estimate is that around EUR 5 million will be invested in the new hotel, but that they don't yet know what the exact amount will be.

– We will build a new facility in line with the desires and needs of tourists. It will be a luxurious hotel, featuring all the medical components, a wellness center and other features necessary to satisfy even the most demanding guests – Raicevic says.

Two hotels operate in Lukovska Banja, Kopaonik and Jelak, both owned by Planinka. Raicevic reminds that an intensive development of Lukovska Banja started in 2000.

– The capacities of the hotels in Lukovska Banja are filled throughout the year. I am satisfied, as we've managed to keep the local populace in Lukovo, and even have a small ski lift.

Looking by the number of thermal and mineral water springs (37), with temperatures ranging between 35 and 69 degrees Celsius and flow rates exceeding 100 l/s, Lukovska Banja is one the richest spas in Serbia. The waters in Lukovska Banja can be used for balneotherapy, as an addition to the process of medical rehabilitation, for rheumatic diseases, blood vessel treatment, blood pressure regulation, gynecology diseases, skin diseases, digestive system diseases, eye treatment, blood sugar reduction...

Let us remind that, in 2017, Planinka completed an investment cycle in Prolom Banja, where it built a new wellness and spa center and renovated the restaurants and the rooms.

As Raicevic says, the company is now switching its focus to Lukovska Banja. The company also plans to take over Kursumlijska Banja, which eKapija has reported on recently.

In addition to Lukovska Banja and Prolom Banja, Planinka also contains within it a water plant, and they also run the Djavolja Varos destination. The annual capacity of the water plant is 50 to 60 million liters. Raicevic says that they invest the profit from the water plant in tourism and that Planinka exports 27% of what it produces. The Prolom Voda brand will soon become available in the market of China, and the first container has already been shipped. The brand is already present in the market of the region, as well as in Western Europe, Russia, the USA and Australia.