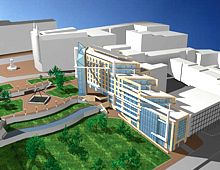 
Terazije Terrace – B2 is a representative business housing facility with unique technical solutions and it is the first building in Serbia, and probably in Europe, with fully integrated management systems with open architecture and standard protocols.

The system has been conceptualized in such a manner that the designed equipment is a product of the top quality world firms, each in its domain, with Sauter - Switzerland and AMX - USA playing special roles. Various equipment is connected by means of unique software solutions developed by companies Projektomontaza a.d. Belgrade and Sinkom Novi Sad.

Essentially, the system consists of two platforms covering the entire building. The first one – Sauter, with Nova net network and NovaPro surveillance program controlling the entire building, as well as AMX platform, which, through Ethernet network with Cisco equipment, also covers the entire building, so these platforms are redundant to a considerable extent. i.e. represent a reserve to each other. The priority task of the network relying on Sauter controllers is the regulation of air-conditioning and all other technical systems related to technical maintenance of such a modern facility, connecting to Danfoss thermal energy meters, receiving information on consumed energy and inclusion of all the systems into a unified application (program); it is thus possible to follow up through this single application each change (light, air-conditioning, shutters, `smart` plugs) in any flat, apartment, business premises, technical sub-stations, the consumption of heating and electrical energy, which probably represents a unique solution in Europe. 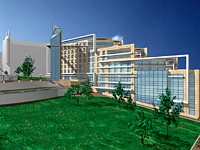 The priority task of AMX platform is the link to Ethernet network and therefore to the Internet, wireless network with remote controllers, and mobile telephony with recognizing orders coming through SMS messages and dispatching answers following the exercise of such orders. Also, the task of this platform is to extract from the main fire and burglary check panel information on a particular flat and forward it thereto, with a sound alarm accompanied by appropriate image and text received on the wall Touch Panel.

By its basic conception, the system is established in such a manner as to include several handling levels. The first handling level is classical, by means of smart, fully programmable buttons and each of them may switch on, off, and adjust the lighting intensity of any lamp, a group of lamps or all the lamps in a room or the entire flat; it is, therefore, sufficient to press only one button upon leaving the flat and all the lights and plugs set as smart, will be switched off.

Each of these functions may be easily changed by changing the program and without the building technical maintenance staff entering a flat. In the event of change of the program, the same button may be used to adjust, for example, the angle and the height of blinders. In the event the 2 meteorological device on the building roof records an excess wind speed, blinders will be automatically lifted in order to prevent breakage, which action will occur regardless of the user`s command.

The following level is the so-called Smart Sensors with text display, which may be used, for
example, for changing the set temperature, or Fan Coil speed, lighting regulation, and at the same time it may register the room temperature. The additional four buttons are programmed as desired, as well as the previously described buttons.

The third handling level is the Touch Panel, which enables full handling of all devices installed in a flat as well as feed-back on any given command, e.g. how many, if any, lights are on in a bedroom. The panel contains the ground-plan of the flat and it is sufficient to press on the desired room to switch to such room commands. In the event of alert, a sound alarm appears on the Touch Panel as well as the image with short instruction on how to switch the alarm off or leave the flat, if so necessary.

The following, fourth level is the first remote control level, by means of Phillips remote controller of the latest generation, with the Touch Panel connected through WI –FI wireless network; it also has the option of handling all the devices installed in a flat, lights, blinders, smart plugs, temperature setting, as well as feed-back on actual recorded temperature in each room and actual status of power consumer utility.

This means that this is a two-way device which simultaneously sends and receives information and it is as well a unique solution in building management. It is also important that any audio, DVD, TV, video, satellite, and any other device may be handled with the said device by appropriately changing its program, so it is now sufficient to have only one remote controller in a flat. An additional advantage of such device is that it uses the existing wireless computer network (802.11 g, which is already becoming standard in an average flat) for connecting a common laptop and it is, therefore, not necessary to have a special connection port for this device. This enables the use of the device within the entire Terazije Terrace facility including its closer vicinity covered by WI –FI network, so that, for example, bathroom floor-heating may be switched on from the ground-floor restaurant. It is understood that the command is limited only to the pertaining flat and there is no even a theoretical possibility to command any other flat.

The next, fifth level is the handling by means of a supervisory computer used by Technical Staff located in the control center, who, in the event of being properly authorized, may command any function in the entire building, including flats. This function practically represents a classical BMS (Building Management System), i.e. the Central Surveillance and Management System.

The sixth level is handling by sending SMS messages from a mobile phone of any make, whose SIM card – telephone number has been previously entered into the controller memory in order not to allow commands to anyone except the flat user.

Simple messages of S1 or S0 type mean `switch on` or `switch off` the lights in a flat, T22 – set temperature at 22º, etc. Following the exercise, the system will re-send the SMS message to the user, confirming the exercise of the order. If the user forgets commands, it will be sufficient to send any wrong message to the system and the system will send a SMS in a few seconds with a short instruction on the appearance of commands. If there is an alarm activated, the system will send a message to a predefined mobile phone number, informing the user on possible security breaking of such flat and the building Technical Staff will receive the message on the appearance of any alarm, i.e. interruption of regular functioning of any technical system within the building.

The system also measures consumed heating energy in each flat and makes automatic readings at any moment, which, in cold days, enables easy registering of any forgotten open window and unnecessary waste of energy.

For these systems, Projektomontaža uses: