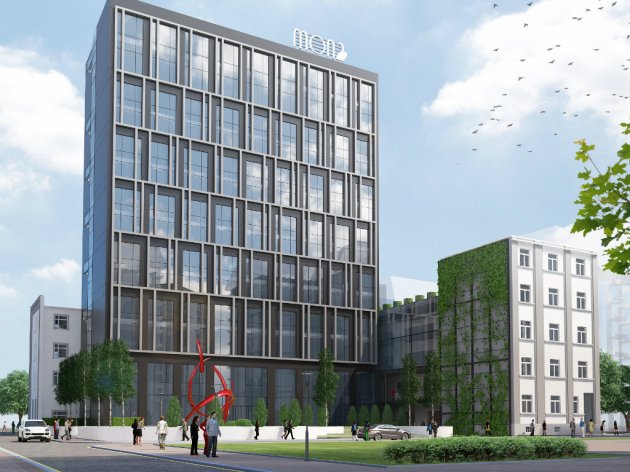 Future look of Hotel Mona Plaza
Belgrade will get another hotel in two years. The company Mona started building a hotel in Dorcol, in which it will invest EUR 30 million, on November 30. The new hotel will be located on the corner of the Cara Urosa, Dracka and Solunska Streets, not far from the former Beko plant and the Milan Gale Muskatirovic sports center.

Hotel Mona Plaza will take up 20,000 square meters, have 152 rooms, a parking lot, a banquet hall with over 700 seats, a fitness center, two restaurants...

The project entails the formation of the complex through the reconstruction and repurposing of the existing facilities on the parcel, along with the extension of a 13-story tower and the accompanying underground garage. The plan is for the tower to have a hall for conferences, weddings and other similar events on its ultimate floor. The main entrance will be from the hotel plaza on the corner of the Solunska and Dracka Streets, whereas the entrance from the Cara Urosa Street will also be kept.

The ceremony of marking the beginning of the construction was attended by Serbian President Aleksandar Vucic, Mayor of Belgrade Sinisa Mali, President of the Managing Board of Mona Hotel Management, Tomislav Momirovic, and the director of Mona, Uros Momirovic.

Tomislav Momirovic said that, thanks to its position, the hotel would contribute to the affirmation of old Dorcol and become one of its symbols.

– When you invest in hotels, you are looking at things in the long term, and we have been planning this since 2005 – Tomislav Momirovic said and emphasized that this was the biggest investment of Mona since its foundation.

Once completed, the hotel should have four stars.

– I have seen the future in Serbian family companies, which are transferred from parents to their children – Vucic said.

According to him, the number of tourists in Belgrade has increased by 20% this year compared to 2016.

Mali reminded that there had been 67 hotels in Belgrade 2014 and that there were 94 at the moment.

– In the first nine months of this year, the number of overnight stays increased by 23%, with over 1.6 million overnight stays realized in Belgrade. The number of foreign tourists is larger by as much as 20%, whereas Belgrade will have nearly EUR 8 million in income from tourism alone this year – Mali said.

The completion of Mona Plaza is expected in 20 months.

Mona is a private company producing female and male clothes from leather and textile. In 2011, it started investing in tourism when its subsidiary Mona Hotel Management was founded. This daughter-company owns hotels Mona Zlatibor, Javor in Kusici, Argo in Belgrade and apartments in Budva.