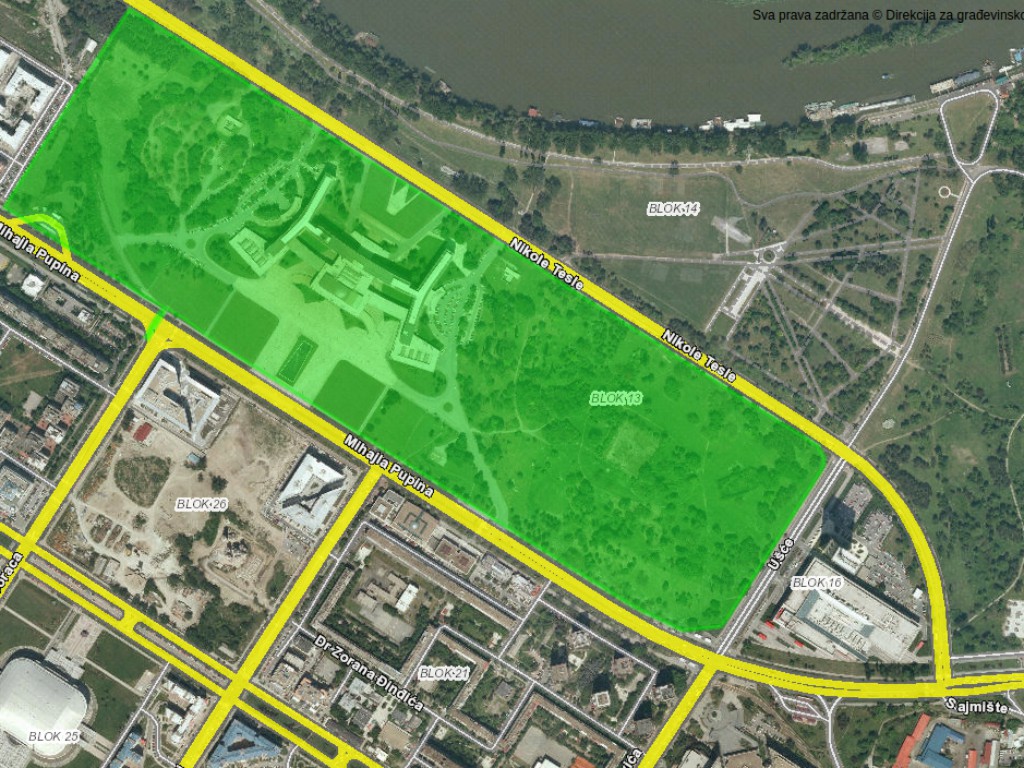 Block 13 (Photo: gis.beoland.com)
The construction of a concert hall in New Belgrade, on the area between the Usce shopping center and the Palace of Serbia, is increasingly more certain. This conclusion is supported by the Draft Detailed Regulation Plan for Block 13, which is currently undergoing public review. Based on this plan, the first international architectural contest for the concert hall facility should be organized.

The plan encompasses an area of around 47 hectares, including the part of the territory of the municipality of New Belgrade between the Mihajla Pupina Blvd, the Usce Street, the Nikola Tesla Blvd and the regulation of the service traffic route towards Block 12, and the aim, as stated, is to define the potential of Block 13 for the “transformation, reconstruction and construction of facilities in an open block typology, the defining of public interest and the creation of conditions for enhancing the usage of the existing features”.

The central element of the area is the Palace of Serbia, which, according to the plan, should remain incorporated in the park area, whereas the foundations of the Museum of the Revolution are to be removed from the area which is planned to feature the concert hall facility, which will have the basic characteristics of the first-prize solution from the contest carried out in 2016.

The urban and architectural solutions defining the relation of the new philharmonic facility to the Palace of Serbia, the Danube and the existing green area were selected at this contest.

The works submitted to the contest acted as the basis for formulating a planning solution for this part of Block 13, and the draft plan entails the possibility of opening a public international architectural contest for the concert hall facility to the end of defining the best solution for this type of a facility.

According to the awarded preliminary design, the north side of the philharmonic complex is intended for a green oasis to spread across all elevations, whereas the south side will actively connect the floor segments of the mall and the access road to the entrance to the building, enabling an exit to the roof, which will provide a view to Kalemegdan, the river and old Belgrade, the Palace of Serbia, New Belgrade and Zemun. The plan includes extensions of the topmost positions of slanted platforms, the so-called “stands”. 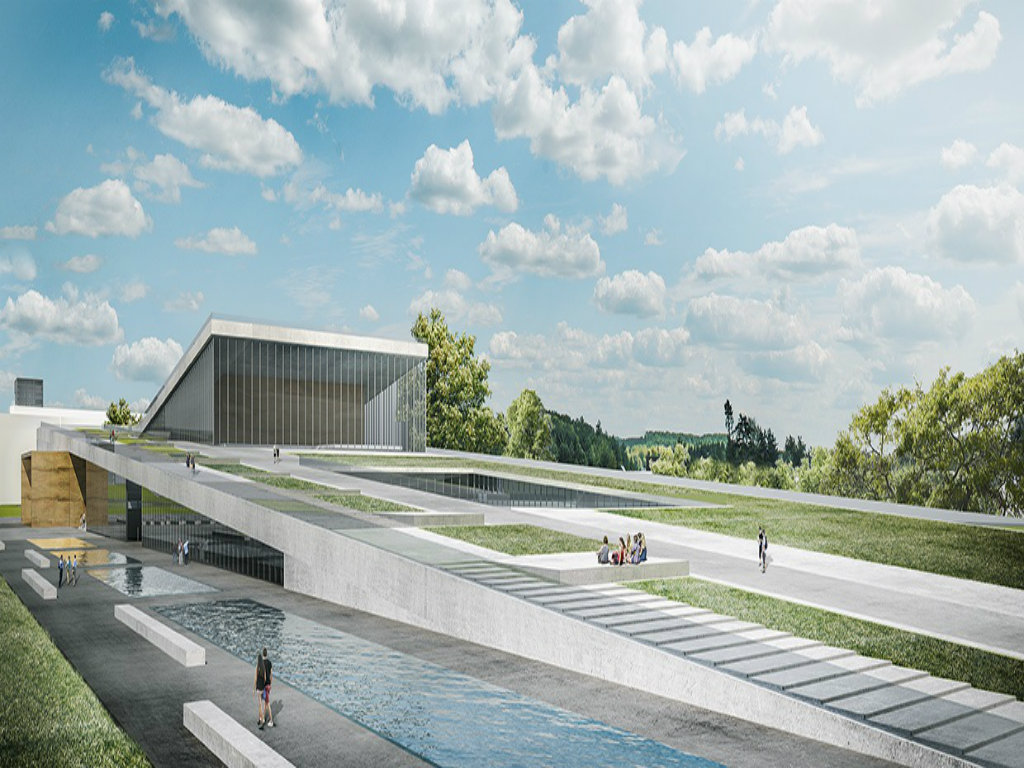 The preliminary design of the new philharmonic (Photo: beoland.com)
Along with the concert hall features, the complex should contain accompanying commercial features as well. The capacities envisaged in the awarded solution entail a gross floor area of around 27,000 m2 for cultural features, around 19,000 m2 of commercial features and around 29,000 m2 of underground levels, with around 1,000 planned parking spaces.

The total area of the zone on which the concert hall is to be built amounts to around 16.3 hectares, whereas the zone of the Palace of Serbia features around 30.6 hectares.

The zone consists of the Palace and developed free and green areas in its direct environment. The area taken up by the Palace amounts to around 28,000 m2, whereas the available data say that the total gross floor area of the Palace of Serbia amounts to around 71,000 m2. According to the available data, 2,700 people work in this facility, which contains around 770 offices, nine representative halls in the central corpus and 12 halls in lateral tracts.

The construction of single-floor underground garages, in front of the East and the West Wing of the Palace of Serbia, is also planned within this zone.

The plan also notes that the existing gas station in the Mihajla Pupina Blvd, which, it is stated, “was raised without a building permit”, needs to be removed. Following its removal, the section will be turned into a green area modeled after the park area of the Palace of Serbia.

The plan does not mention the possibility of construction of four skyscrapers with 24 floors each in close proximity to the YU Business Center, which, let us remind, was a part of the preliminary design for the development of Block 13.

As the documentation states, the planning activities in Block 13 started with the preparation of the first post-war General Urban Plan of Belgrade in 1950. The starting point was Nikola Dobrovic's idea for planning New Belgrade, which dates back to 1946, and the main concept behind the plan was the construction of a modern city on the Sava's left bank, New Belgrade, as the capital of the Federation according to the principles of modern urban planning, based on Le Corbusier's Athens Charter.
Companies:
Grad Beograd
Tags:
Detailed Regulation Plan of Block 13
DRP Block 13
contest for architectural solution for Block 13
contest for architectural solution for Belgrade Philharmonic
Belgrade Philharmonic new building
Usce commercial building
Palace of Serbia
Mihajla Pupina Blvd
Museum of the Revolution
Block 13
Nikole Tesle Boulevard
development of Block 13
New Belgrade concert hall
gas station near the Palace of Serbia
Palace of Serbia gas station
YUBC
YU Business Center
Usce shopping center
underground garages
Belgrade Philharmonic
Share: