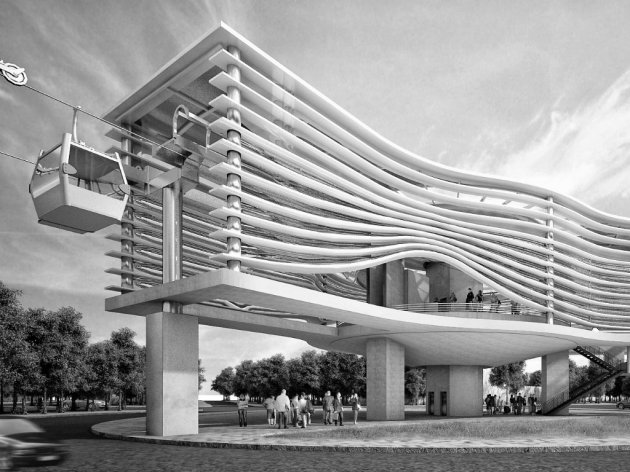 The model of one of the future Beogondola stations
The citizens of Belgrade might finally witness the first construction works on the gondola which is supposed to link Kalemegdan and Usce next year. This means of transportation will connect two important tourist destinations in the capital of Serbia and provide a better link between the two Sava banks, primarily for tourists.

The company Beogondola believes that this type of transportation has an incomparably greater potential for Belgrade. They are proposing the construction of a gondola public transport system with 15 lines, which would increase the passenger transport capacities in Belgrade tenfold. The idea seems especially interesting today, when a large number of traffic infrastructure repair sites cause great problems for the citizens and visitors of Belgrade.

– Current surveys show that up to two million passengers travel around Belgrade each day, far exceeding the limits of the current concept of transportation. With the construction of the 15 Beogondola lines, the transportation capacity increases tenfold – the company says for eKapija and clarifies that “each gondola would be able to take in up to 15 passengers, and a new gondola would arrive each 15 seconds, capable of taking in the next 15...”

As they point out, a thorough survey has been performed, tracking the intensity of traffic and the number of passengers, involving local and foreign experts, which has shown that “Belgrade urgently needs a new public transport concept with new lines on the busiest routes”. The new concept, according to them, is the proposed transport through air, which will “bring Belgrade back to its citizens”.

– The question is whether people of Belgrade have the time to wait for the construction of the subway when jams are noticeable on the streets of Belgrade even now. Beogondola will have a solution in two years, along with big savings, and all this while everybody is still waiting for the subway to be constructed – our interviewees explain and add that gondola transport combined with the subway is the best solution for the city.

– Gondola transport and the construction of the subway are not mutually exclusive. On the contrary, they are quite complementary – Slavisa Vasiljevic of Beogondola says for eKapija and adds that the gondola system would realize savings of EUR 300 million in the first year, primarily in buses, fuel, electricity for trams and trolleys... Furthermore, he says, the initial projections show that Belgrade would need no more than 600 buses in that case.

Beogondola estimates that the entire system might be built in 2-3 years within the acquisition of all the necessary permits, and the total value of the investment is estimated at around EUR 500 million.

– The entire investment would be provided by local investors through a public-private partnership. Beogondola would thereby become a pioneering project, which would show that it is possible to find investors in Serbia if a good projects is recognized on time and if the necessary permits and documents are secured quickly – Vasiljevic says.

Illustration (Photo: superjoseph/shutterstock)
He says that they expect to be supported by the citizens of Belgrade above all, but that they also expect the local authorities to recognize the value of the project which fits into and complements the construction of the subway and brings a new concept of transport, which is also easy to realize quickly.

– Beogondola Group welcomes the construction of a tourist gondola in advance. It is great that the City of Belgrade has realized the advantages of gondola transport, which is what has encouraged us to once again propose the project that fell on deaf ears in 2003 – Vasiljevic says.

– Belgrade has only about ten days a year of winds’ exceeding the speed of 80 kilometers per hour, and then not every year. When it occurs, it doesn’t last for more than two hours. Only in such cases would the gondola transport be paused and compensated for with an increased number of bus lines. Other weather conditions have no influence on gondola operations – Beogondola assures us.

Regarding the reliability of this type of transport, the company says that, since the very beginning, they have been accompanied in this project by Austria’s Doppelmayr, which has already built gondola systems in 30 cities and countries worldwide and which is “ready to offer the best conditions for the construction of a gondola public transport system to Serbia and Belgrade”.

Prices identical to those in the Bus Plus system

One of the important aspects of the assessment of cost-effectiveness of this type of transport is the fare price, and Beogondola assures us that the fares would cost as much they do now and that they should be a part of the Bus Plus system.

– It is very important to say that gondola transport eliminates riding for free, as there is no way not to pay for the fare – the company says and reminds that, in addition to serving as a public transport system, gondolas would also be a big tourist attraction in the capital of Serbia.

– For example, Lisbon has become a true jewel of tourism thanks to its gondolas and tourists never miss a chance to ride a gondola by the sea. In our case, imagine seeing Belgrade from air while riding next to the Sava or the Danube at the price of a ticket fare. Imagine being able to go from the noise and the crowd of the city, just like in New York, to a fish restaurant in Gardos and to then return to downtown Belgrade just as easily. This is mission impossible even by car at the moment, and Beogondola will enable that – Vasiljevic says.

From Kaludjerica to the Vuk Monument in 22 minutes

The Beogondola project envisages 15 lines distributed so as to link various parts of Belgrade in the quickest way possible. 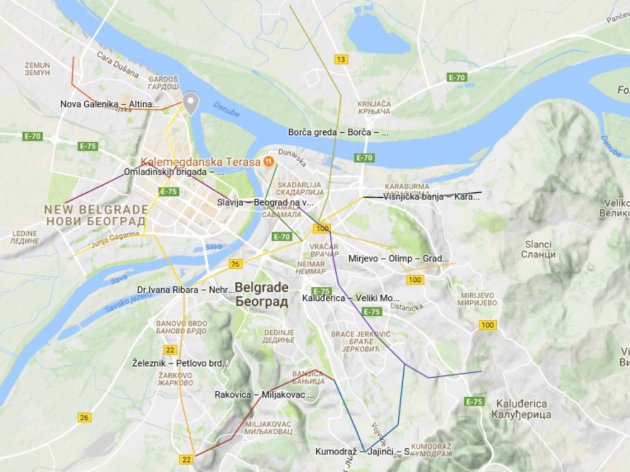 Proposed line map
The first phase of the project would be to build a promo line from Borca to Block 45 through a hub in Tasmajdan. The construction would be over in no more than a year from the acquisition of the permit and would serve as a kind of a test of the capacity and the sustainability of the project.

Beogondola also cites examples of lines on which transport would considerably speed up compared to the current situation: