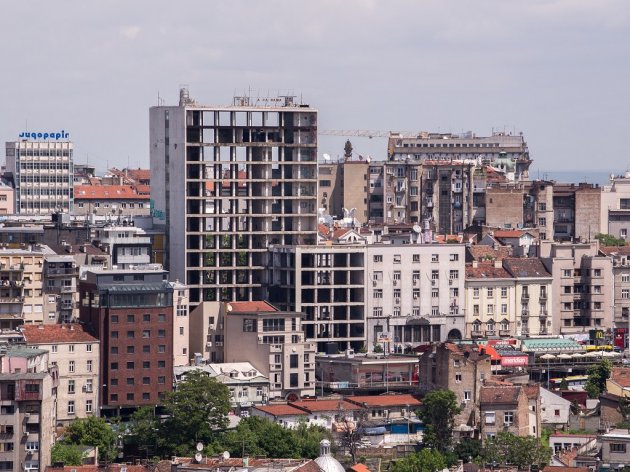 Only the skeleton of the former Beobanka building in Zeleni Venac remains (Photo: Nemanja Dačić)
Local architects and their undergraduate future colleagues have been given an opportunity to test their strength at the survey contests for the conceptual design for the Balkans eco-center in Zeleni Venac, Politika writes.

The opportunity was provided by the design studio Stattwerk, the Serbian branch of the eponymous German company, which bought the former Beobanka building in Zeleni Venac from the city last November.

The new owner wants to turn the facility into the first green edifice in the Balkans, which will be energy-independent, as it will use the sun, wind and geothermal power for heating and cooling.

The architects are supposed to submit propositions for the reconstruction of the building, which will feature apartments, a restaurant, a bar and a lookout, as well as office space intended exclusively for environmentally oriented companies, an educational eco-center and a garage.

The prize fund of EUR 19,500 will be distributed to ten solutions by an international jury, which will feature Vladan Djokic, Dean of the Faculty of Architecture. The best solution will be awarded with EUR 10,000, the second prize is worth EUR 3,000, the third one EUR 2,000, and the fourth and the fifth one EUR 1,000 each. The remaining five works will get EUR 500 each.

The students are supposed to conceptualize the design of the facade so that it matches green and energy-efficient architecture. The same jury, which will be joined by Professor Budimir Sudinac of the Faculty of Architecture in Belgrade and Porfessor Ivana Miskeljin of the Faculty of Technical Sciences in Novi Sad, will decide who gets the first prize of EUR 1,500, as well as the second and the third one, both worth EUR 500. The three students will also be awarded with a paid six-month practice at the Stattwerk studio in Belgrade.