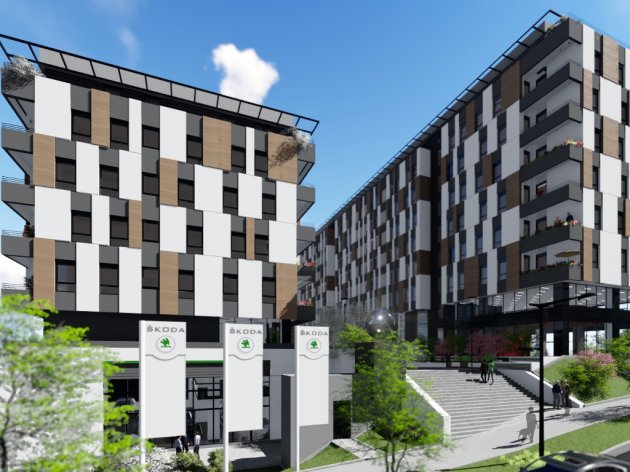 The sale of apartments in the residential-office complex Panorama Vozdovac began recently and the majority of the apartments offered have already been either reserved or bought, it was said on Thursday, September 28, 2017, at the press conference on the occasion of the beginning of the construction of this complex.

At the same time, a model apartment has opened, in which all potential buyers can take a look at the materials and the equipment to be built into the future apartments and get more information about the project itself from authorized sellers.

The company Alpros, let us remind, is building a total of four apartment complexes with 187 apartments, three business premise areas and four outlets on the corner of the Vojvode Stepe and Kruzni Put Vozdovacki Streets. The complex will also feature 219 garage spaces across three underground levels. One of the business premise areas, as already known, will house a sales and service center of Skoda, of which Alpros is an authorized dealer.

Ana Markovic, Head of Sales at West Properties and the exclusive sales representative for the Panorama Vozdovac complex, says for eKapija that, of nearly 40 apartments in the complex no. 3, the first one to be offered to purchasers, only nine apartments are still available. At the same time, she announces that the sale of property in the complex no. 4 will soon begin as well thanks to a great demand.

The total value of the investment in Trosarina in Belgrade has been estimated at EUR 13 million, and the project is financed with support by ProCredit Bank.

The construction of the complex is to be carried out in three phases. In the first one, underground levels beneath the entire plot of land and the first two apartment complexes will be built. The completion deadline for this phase is September 2018, whereas the entire complex should be completed by September 2019.

Parallel to the construction of the complex, as the owner and General Manager of Alpros, Mladen Aleksic, says for eKapija, the extension of the existing Kruzni Put (roundabout) directly along the Panorama Vozdovac complex should also begin. He adds that this should further increase its attractiveness and improve its traffic connection with the rest of the city.